Careful Planning Then Perfect Execution Results in a 1967 Mustang Fastback

One Dark Horse: Alec and Eddy Shea had a passion and a vision, and then an action plan 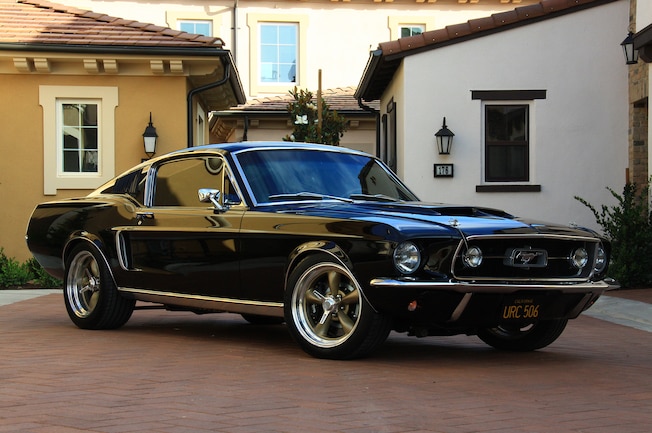 To appreciate Alec and Eddy Shea’s Dark Horse 1967 Mustang fastback project, you’d had to have followed this effort from the beginning. “I am a modern young man and an avid car lover with old-school values. In theory, someone at my age would be more attracted to bling-bling gizmos and the electronics in today’s new cars,” 20 year-old Alec Shea tells Mustang Monthly, “I’ve always been infatuated with American muscle cars, especially those from a bygone era.” Alec shared this passion with his father, Eddy. They wanted to embark on a father-son project together building a legacy—a classic Mustang muscle car.

“My father was the first to bring this up. I, of course, met this idea with skepticism. How were two individuals with such limited knowledge of automobiles going to accomplish such a feat?” Alec reflected. “The more we talked about this, the more we developed logistics for this dream of ours. Next thing I knew, we journeyed down a road that would change our lives.”

Mustang is an American icon that has always changed lives. When Alec and Eddy became committed to building Dark Horse, it became an obsession for them like it has for thousands of others. It was all these gentlemen could think about. “Everything seemed to fall into place for us. We needed to find a 1967 Mustang fastback, which was exactly what we wanted. With that this project began taking me places. I packed up my duffel bag and headed to Boise, Idaho, to meet Scott Brideau of Car Concepts,” Alec tells Mustang Monthly. “Without Scott, this project never would have been possible. Being able to watch Scott in his workshop to see his skilled craftsmanship at work has been the experience of a lifetime. As I look at the finished product, I am still able to recall the things I was able to assist Scott with.”

Scott began this project with a C-code 289 2V Brittany Blue 1967 Mustang fastback and went to work in earnest. “I was contacted by Eddy Shea after he was referred by a friend of mine about building a 1967 Mustang fastback. The Sheas were looking for a high-end build that would offer the classic look of a Mustang fastback, yet be up to date in terms of performance and safety. The color had to be black with a matching leather interior. The engine had to be a 427 with an eight-stack induction system,” Scott says. “I had a California black plate fastback in my shop that fit the bill as a donor for this project. Our first steps were to establish performance tire and wheel sizes, along with a great stance, while maintaining a vintage look.”

“One of the obstacles going in was selecting a high-performance suspension that would not require a front wheel with too much positive off-set, which would give the appearance of a modern, or front-wheel drive, wheel. We selected the Griggs GR350 system because it provided the handling and front-track width we were looking for. In back, we chose a custom-width Griggs torque arm-equipped 8.8-inch Ford 33-spline rear axle with 3.73 gears and Wave-Trac. To make all this performance work properly, the unibody would need to be strengthened,” Scott adds.

Eddy and Alec did not want to disrupt the Mustang’s classic demeanor with a full rollcage. They looked to Scott for the best approach possible, “We used a more stealthy method by fabricating and installing a pair of 2x3-inch custom frame rails, crossmember, and an additional torque box so it looked factory and held the car together. A period-correct Scott Drake 1967 Shelby rollbar was modified and installed in the car,” Scott adds.

That’s Raven Black single-stage polyurethane by Southern Polyurethane, Inc., professionally applied by Scott Brideau. If you study the body closely, you will not see a single flaw because Scott employs a grueling, demanding regimen. For Scott, the devil is in the details. He spent hours of preparation time before primer and paint went on. The car looks as though it was dipped in Raven Black. “I call it blueprinting the body. In other words, every panel, edge, and bodyline was adjusted, massaged, and worked until everything flowed from panel to panel. The engine compartment also received attention. The goal was not to get too far away from the factory feel, but to make everything have an OEM look about it, a place for everything,” Scott says. “We kept the shock towers, because they look like they belong under the hood of a Mustang. We used 2 1/2-inch tubing bends and made space for the header tubes, so most of the shock towers could remain in place. A spot was made for the ignition coil, heater hoses, and power-steering reservoir. A factory-style export brace added chassis stiffness and completed the illusion of a period-built race car. This car was to stay in the Shea family forever, and it needed to be refinished and protected to stand the test of time.”

“We used Southern polyurethanes (SPI) epoxy on all the bare metal and during the bodywork,” Scott says. “With everything prepped, SPI black single stage, was sprayed, and topped with SPI Universal clear. The underside of the car was shot in SPI epoxy and received a bed-liner coating, for protection and noise dampening.” Scott wanted a real driver’s car, something that would endure.

Interior Revolution in Boise, Idaho, tackled the interior, cladding the bucket seats in rich black leather. When you disembark, the view on the way out is incredible with custom Classic Instruments Bomber Series instrumentation lit in brilliant LEDs, a 1965-1966 woodgrain wheel borrowed from the Interior Décor Group, and, believe it or not, a Philco AM radio. When you’re piloting a ride like this, the only sound you’re interested in hearing is the 427ci small-block under hard acceleration.

One of the greatest challenges of the Dark Horse project was fitting an FE series 427 big-block with the eight-stack Inglese/FAST EZ-EFI induction completely under the hood. That’s when Scott focused on infusing more displacement into a small-block. They decided to go with a 351W based small-block bored and stroked to 427ci. Mike Herring of Valley Crankshaft in Boise, Idaho, started with a Dart SHP block and Pro 1 heads, and then spun it on the dyno to achieve 500 horsepower with plenty of room for more. That’s a Billet Specialties Tru-Trac front dress. MSD lights the mixture. An Aeromotive fuel system provides the go juice. Those are BBK headers with a Car Concepts flange mod to work with Dart heads. A Be-Cool radiator offers optimum heat transfer and durability. MagnaFlow mufflers and custom stainless steel pipes deliver the message. Twist the ignition and grab the shifter. In the tunnel is a Modern Driveline/Tremec TKO-600 five-speed box and Hurst short-throw shifter.

Look at what you can do with a 427ci small-block stroker. Dress this guy anyway you’d like and make anywhere from 500 to 600 horsepower.
On top is an Inglese induction eight-stack system with FAST EZ-EFI fuel injection.

On the ground is a Grigg’s-prepared Ford 8.8-inch rear axle from the Fox body Mustang parts shelf. Security for this integral carrier rear end is a Griggs Watts link package with coil-over shocks. All of the adjustable VariShocks were inverted to reduce unsprung weight. Griggs supplied the suspension in front with a double wishbone package, splined sway bar, and rack-and-pinion steering. In all four corners are Vintage 45 wheels around Wilwood six-piston calipers and 13.5-inch drilled rotors up front, and 12-inch drilled rotors with four-piston disc brakes in the rear. Those are Continental Extreme Contact DW tires, P255/40ZR17 front, P285/40ZR17 rear.

For Alec, the Mustang has been more than a car-building project, it has been quality time spent with his father on an enormous life-changing event during which he has come to understand humility, compassion, and work ethic. He learned what it means to stay the course and how to execute a project to completion despite obstacles. “I don’t think I will ever forget my feelings when I saw the completed Mustang for the first time. As someone who was able to not only see, but get hands-on experience on this entire restoration process through,” Alec says. “Of course, I am extremely fond of sharing my experiences and photos.”

Alec and his dad wanted to create a fun classic muscle car that got the looks, while also having something that was a good investment, “With help from Scott, I knew my father and I had accomplished our goal from the moment I saw the final product. I understand the pride my father and I have for the car now, which will be everlasting. Dark Horse is something I look forward to sharing with my kids.”

This is a lesson in ride height, with just the right amount of rake and a down-low demeanor anyone can feel good about.
Alec Shea respectfully takes the wheel of Dark Horse a couple of times a month for his driving pleasure. Count on this being a lifelong relationship that began with his father. Alec plans on passing this family heirloom along to his kids someday.

Behold the investment—not just in terms of cash value—but in the thrill it provides Alec and Eddy. We’ve become so focused on monetary value that we’ve forgotten how to have good old-fashioned fun with a classic Mustang. As the late Carroll Shelby said to me years ago, he didn’t build classic Mustangs to be tucked away in garages. He built them to be driven and enjoyed.

The Shea’s original goal was to birth an outstanding cruiser with plenty of power and an abundance of torque with good driving manners between 3,000 to 4,000rpm, and they have achieved that handsomely. “This father-son project has created a rare and unforgettable experience and bond,” Alec says.