All Hail The King of the Road: A trip to Ken Nagel’s Muscle Car Museum in Plano, Illinois, changes course when we get Snake Bitten 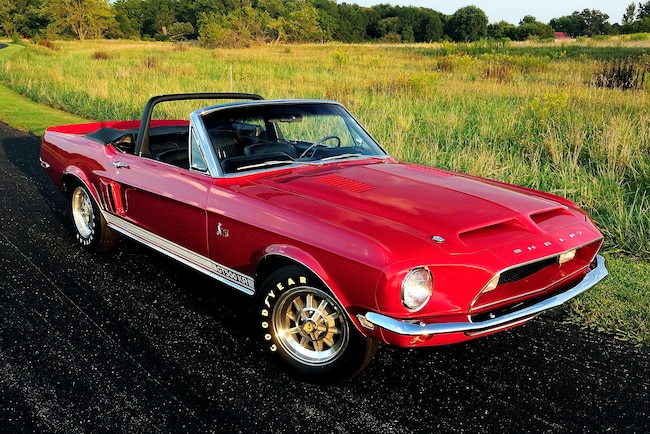 Walking through Ken Nagel’s car collection in Illinois, my eyes locked on a flawless Candy Apple Red ’68 Shelby G.T. 500KR convertible, and I stopped dead in my tracks. Nestled among several convertibles from the ’50s and ’60s was this sparkling Shelby.

Nagel picked up my body language and seemed to know the Shelby had reached out and grabbed me. “Want to see under the hood?” he asked smiling.

Before me was an amazingly clean engine bay containing a stunning 428 Cobra Jet engine. Someone had taken a great deal of time during the restoration to make it look factory fresh. Suddenly, I noticed the air-conditioning compressor. I blurted, “Does it have factory air conditioning?”

Nagel nodded. “Yes, it’s one of six with factory-installed A/C.”

The car was a rare bird, indeed. According to its Marti Report, this 1968 Shelby G.T. 500KR had been scheduled for production at Ford’s Metuchen, New Jersey, assembly plant on May 21, 1968. However, the convertible rolled off the assembly line on May 23, two days later. After a trip to Ionia, Michigan, for the Shelby treatment, it was shipped to Jim Aikey Ford in Des Plaines, Illinois.

The story of Nagel’s G.T. 500KR convertible begins with the phrase, Once upon a time…, when brute horsepower, straight ahead speed, and muscle ruled the streets of America.

As a quick history lesson, Ford introduced the most powerful Shelby Mustang ever at the 1967 New York Auto Show. Meanwhile, the automobile world viewed the ’67 model as the beginning of the end for Shelby American, and its future building high-performance Mustangs in cooperation with Ford Motor Company. A short time after the introduction of the ’67 Shelby G.T. 500, cost, production, and quality concerns mounted and turned the G.T. 500 into a marketing nightmare for Ford Motor Company. In May 1967, the California-based Shelby operation was closed. On August 18, 1967, a small crew of staff members, including engineers, was sent to Ionia, Michigan.

The ’68 Shelby Cobra G.T. 500KR was a mid-year introduction, based on the ’68 Shelby G.T. 500. Ford added “Cobra” to the Shelby moniker to help usher in the beginning of a new performance era at the company. The Cobra name referred to the new 428 Cobra Jet V-8 engine fitted under the KR’s fiberglass hood. It was an engine designed to vault the Mustang to the head of the pack. Ford Motor Company rated the horsepower at 335 (reportedly, grossly underrated it) with 440 pound-feet of torque.

The “KR” stood for “King of the Road.” It was an aggressive marketing move by Carroll Shelby, who had learned the Chevrolet Division at General Motors was preparing to unleash a marketing campaign that called the 1968 Corvette the “King of the Road.” After a quick copyright search, the Shelby team found “KR” and “King of the Road” had not been copyrighted. Stickers, graphics, photos, and decals were quickly made by Shelby and his team and placed on the new G.T. 500, thus, the Shelby Cobra G.T. 500KR was born.

Nagel found this flawless KR convertible in Chicago, not far from the dealership that originally sold it. He stumbled upon it while attending the World of Wheels car show at the McCormick Center in Chicago during 2007. He couldn’t put the car out of his mind and left the car show determined find the owner and make an offer to buy it. More than two years later, his plan finally came to fruition after he obtained the owner’s contact information and phoned him about purchasing the car. The owner Dennis Neva informed Nagel that it was indeed for sale.

Neva had gotten the car from the original owner more than two decades earlier. Unfortunately, it had spent its entire life in Illinois and needed restoration. Neva did a full nut-and-bolt rotisserie restoration using N.O.S. and custom hand-fabricated parts. Nagel does his research and uses a methodical approach before making a new purchase for his classic car collection. Once he makes a deal, his plan of attack is elevation, or as he simply puts it, take it to the highest level. Rarely will he purchase an automobile turnkey and not follow his tried and true plan. Once in a while, one comes along requiring minimal work and just a small amount of detailing, such was the case with this car.

Due to its high level of restoration, nothing was required for the car to join Nagel’s fleet, where it sits at the entrance to the collection, the perfect place to immediately grab people’s attention. The lucky few who’ve had the opportunity to spend time with Ken Nagel and his car collection would certainly agree he only allows the best of the best to enter the doors of his collection. He sets the bar high, and his classic collection is World Class with its layout and top-shelf automobiles. You can find out more about Ken Nagel’s Classic Cars at KenNagelClassicCars.com