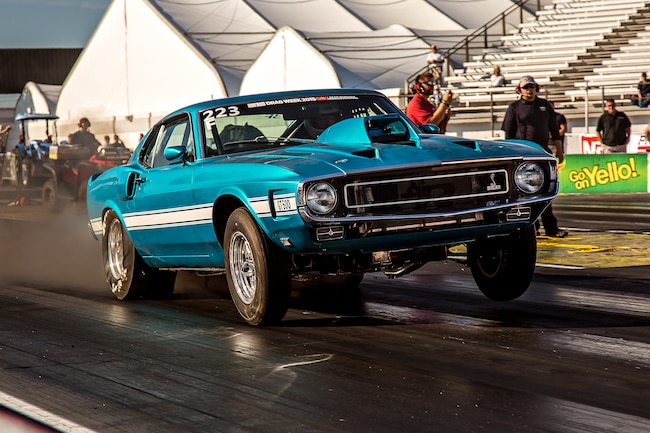 Readers of Mustang Monthly may not be all that familiar with Hot Rod Magazine’s Drag Week event. Perhaps the most grueling chore for any street car, Drag Week requires competitors to drive their cars to four different dragstrips in five days (starting and stopping from the same one for convenience’s sake), with roughly 250 miles between tracks. There are a bunch of classes to include as many types of cars as possible, and each class winner is the car that had the lowest cumulative ET over the course of the week.

It’s a true torture test of fast street cars, especially when you look at the Unlimited Class, which is full of what are essentially Pro Mod cars with license plates—they have to drive, not trailer, the race car, and support vehicles are allowed. It’s also a good place to see some nice and fast Mustangs, and leading that group is no doubt Minnesota’s Jay Brown, widely considered one of the authorities on the Ford FE engines and getting power out of them.

Your author first met Brown on the inaugural Drag Week back in 2005 when he was running a green 1969 Mach 1 with—you guessed it—an FE. He won the Big Block Naturally Aspirated (BB/NA) class that year, and has been back nearly every year. In fact, Brown might be the only guy to win his class at Drag Week in four different cars. After the Mach 1, he won Daily Driver in a 2006 Ford GT (obviously, no FE in that one, though), Modified NA in a 1964 Galaxie with a 427 SOHC, and this 1969 Shelby clone with the same basic SOHC that was in his Galaxie.

Brown bought the Mustang in 2005 with the intent of back-halving it and making a Pro Street car of it, and bought the pieces to make a Shelby clone from Tony D. Branda. He did the back-half suspension work, but had a change of mind, and didn’t want the monster Pro Street tires on the car. Instead, he put it aside to concentrate on other projects like the Mach 1. “I hate to say it, but Drag Week kind of got in the way!” Brown said. “I got so pumped up about the subsequent Drag Weeks that I just kept focusing on whatever car I was taking to the next Drag Week, and I never really got a chance to finish it.”

Brown won in the Galaxie in 2009, and skipped Drag Week in 2010 to focus on finishing his FE book. But he had the Shelby done for the 2011 race. “It was done but not running right,” Brown said. “We didn’t finish, and I was going to take it back the next year. But I did too many things to it at one time and didn’t get it there. In 2014, it threw a rod at the test and tune at Drag Week, but we got it back together for 2015 and won the class.” This Mustang has been on four Drag Weeks, with three DNFs and one win. “It kind of has fought me all the way, always some little thing causing trouble, but I finally got everything ironed out.”

Again, the engine is the same basic one that was in the Galaxie in 2009. “It was radically worked over in terms of basic machining,” Brown said. “It’s a Shelby aluminum block that I bought from Shelby without the bores machined and no sleeves.”

To get the most displacement as he could out of the 427, he had a local machine shop spread the bore centers to 4.700 inches (compared to the stock 4.63) and put in a 4.500-inch bore to take advantage of the huge valves in the SOHC heads. With that 4.500 bore and a 4.600-inch stroke, this thing pumps out 585 cubic inches, but according to Brown, it could be bigger. “If I had it to do all over again, I’d have gone all the way to a 4.75 stroke. I’m pretty sure I can make that fit and it would get me over 600 cubes, which just for bragging rights would have been kind of cool.”

The SOHC heads are what Brown calls no-name heads (which apparently have a long and not-so-good story associated with them) that flow 445 cfm on the intake ports and maintain the hemispherical combustion chambers. A custom grind from Billy Godbold at Comp Cams works with T&D rockers to pop open those valves, and Brown’s own crossram intake manifold (the dude has CNC machines at home!) mounts two four-barrel Accufab fuel-injection throttle bodies run by a DIY Auto Tune/Megasquirt MS3X system. The engine makes 830lb-ft of torque at 5,100rpm and 992hp at 6,700. “My greatest disappointment last summer was that no matter what I did to that thing, I couldn’t make it make 1,000 horsepower,” Brown said. “I must have made 20 dyno pulls trying different things just to get a little more than 992hp, but it just wouldn’t do it.”

Brown is a naturally aspirated guy, so a power adder never entered the conversation. It doesn’t matter, though. The car has run a best ET of 8.88 seconds and hit 150mph at Great Lakes Dragway, which finally justified the parachute he hung off the back of the car. The week was surprisingly trouble-free, with one burned up rocker arm and a minor wiring issue, and Brown estimates he got between 7 and 8mpg with 4.29:1 gears and a Gear Vendors overdrive unit. “It’s a pretty comfortable road car. At 65 mph it’s only 2,500 rpm, not horrible by any stretch of the imagination,” Brown said.

What’s up for the 2016 Drag Week? “I hate taking the same car back to Drag Week. I’ve won with four different cars, and running this one again seems like I’m beating a dead horse. But there’s no time to put anything else together.” He’s thinking of pulling the engine as we write this and trying out another set of heads. However, we’ll wait until Day One of Drag Week to see what he ends up doing. The goal is consistent 8.50s but he’s drawing the line at lightening the car with Lexan windows and a full 8.49-legal cage. “I’m getting too old to crawl through those things,” he said.

Purists have no fear, Jay Brown didn’t cut up a real Shelby. This one started life as a regular 1969 SportsRoof, and became a Shelby clone with parts from Tony D. Branda.

The SOHC engine now displaces 585 cubic inches with a Shelby block and no-name cylinder heads. At 13.4:1 compression, you wouldn’t think it could be considered a “street motor” but that’s the beauty of EFI. Brown custom built his own cross-ram intake manifold (on his at-home CNC machine!). “The intake ports in these heads are really, really short,” he said. “A few years ago I built a conventional sheet metal intake but the [overall] runner length was way too short. This cross-ram was a challenge to build, but it picked me up 40 to 50lb-ft of torque and at least 25hp over the old manifold.” The front suspension is a Fatman Fabrications kit that bolts to the factory lower control arms with struts that bolt into the shock towers, and uses rack-and-pinion steering. Brown had to modify it quite a bit due to the extra-wide SOHC.

These Accufab throttle bodies mount atop Jay’s intake and Ford Performance 80lb/hr injectors are in the runners, activated by a DIY/Megasquirt MS3X system. Brown built his own wheel for the distributorless crank-trigger ignition, and DIY Auto Tune’s Scott Clark operates the keyboard when it comes to tuning.

We ask Brown about the hood scoop. “It’s too bad it has to look like that. I didn’t want to have that big of a scoop on the car,” he said. “With that motor and intake, though, I’m right at the top of the scoop with the throttle bodies, so it’s necessary.” The scoop was a basic fiberglass scoop from Summit Racing that one of his friends made narrower and taller. The top of the scoop has a removable panel with Dzus fasteners that comes out when he’s on the track and allows the engine to breathe through a screen (similar to those on the 1969-1970 Shelby scoops). It goes back in for road miles and to keep rain out of the throttle bodies.
The rearend is all Mark Williams parts, with 40-spline axles and 4.29:1 gears. Brown is swapping to 4.11 gears because as it sits, the car goes through the top end speed traps at 7,700rpm, which according to him, is not where that motor makes most of its power. The tires are 10.5x31-15 Hoosiers.
After driving almost trouble-free for a week and about 1,300 miles on public roads, Brown still ran 8.80s at almost 150mph on Drag Week.
Brown still has all his Drag Week-winning cars. Clockwise from top left is the Galaxie (2009 Modified NA), Mach 1 (2005 BB/NA), this Shelby clone, and the Ford GT (2006 Daily Driver). Wouldn’t you like to have all these in your driveway?

Want a deeper look into Jay Brown’s mind when it comes to FE engines? Get his book, “The Great FE Intake Comparo: Systematic Dyno Testing in Pursuit of FE Horsepower,” direct from his website at FEPower.net.