A Coyote’s Wail: With a mighty 700hp Edelbrock-supercharged Coyote crate engine, this GT700S has a big bark 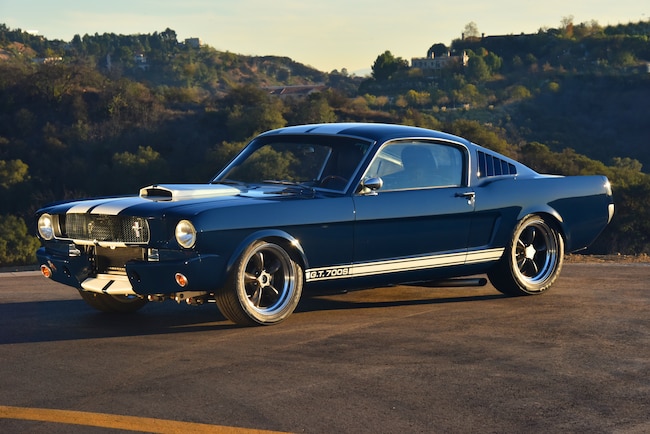 While we don’t cover Mustangs made after 1978, it is still fairly obvious today that no engine Ford built before 1978 can hold a candle in terms of pure performance potential to the 5.0L Coyote V-8 that was first released to market in 2011. But just because we leave the Fox-body-and-newer sheetmetal to our colleagues over at Muscle Mustangs & Fast Fords doesn’t mean we can’t take in some the mechanical glory that’s afforded the late-model guys these days.

Case in point is George Russo’s 1965 fastback, which makes the case for Coyote power in the same way you’d be shot out of a cannon—a 700hp supercharged cannon, no less. Commissioned and built by Bodie Stroud at his shop BS Industries (BSI) in the Los Angeles suburb of Sun Valley and dubbed the GT700S, this car furthers the two-plus-decade-old and enduring tradition of swapping the latest Mustang powertrain hardware into our beloved 1965-1970 coupe, fastback, and convertible body shells.

Speaking about the project, Stroud said: “We built this car for George and his son, Adam. George was a fun client for us. He has a love of all things Shelby and had a pretty clear vision for what he wanted. We were able to attain his vision as the car morphed from a basic hot rod restoration to a greatly more comprehensive project with a definitive Shelby vibe.

“The car has a nearly original but just slightly lower stance on its 17-inch Vintage Wheel Works Vintage 45 wheels, and we didn’t make many body modifications to speak of. Fabricating the G.T. 500–style hood out of steel was the most significant body modification, and we had to do that to accommodate the Edelbrock-supercharged Coyote crate engine. Other modifications in the engine bay include a C&R Racing aluminum radiator, air conditioning, an electric power booster for the brakes, and electric power steering. This car is truly on the cutting edge of combining modern high-performance technology with vintage style.

“As for accessing the high-tech stuff, pieces of the front end come apart, meaning you can actually take the car apart for maintenance. That’s a bonus many will appreciate.

“This car is called the GT700S for the engine that makes 700 hp but also produces 606 lb-ft of torque, which is not insignificant. There’s also no denying the multitude of GT influences on the car. The front fascia is a Shelby R-model replica, the rear bumper is tucked and narrowed, and the chrome has a matte finish. With the Washington Blue paint chosen from a 1936 Ford pickup and slightly darkened, this fastback is a looker. The white stripes really pop against the darker blue color, giving the car a vintage Shelby look.”

Another unique feature of this build is the one-piece side windows that eliminate the side-vent windows, or wind wings as they are sometimes called. Many cars of the 1960s vintage and all Mustangs through 1968, have the smaller triangular-shaped side-vent windows.”

Stroud said: “Inside, the transmission tunnel was fabricated to accommodate the big T-56 six-speed transmission, but we shaped it like the original. We also used 2006 Mustang seats and customized them to look like 1965 vintage with pleats. The gray upholstery ties in well with the darkened Washington Blue paint.

“The suspension is [BS Industries]. It really hugs the road. The Edelbrock crate engine sounds great, really purrs during normal driving, and there isn’t an inordinate level of blower whine when you hit it. The MagnaFlow exhaust also sounds like a real muscle car, and it sounds as good as it drives.

“This build took about two years but the results were well worth the effort. Not only am I very pleased with the car and how it came out, but George and Adam will also be able to share their enjoyment of it with future generations.”

And so there’s the fundamental idea on how two of Ford’s greatest creations—1965-1966 Mustang fastbacks and the 5.0 Coyote V-8 engine—are fused to result in what is certainly one of the more otherworldly Mustangs we’ve seen in a good while.

There are only a few external changes on this car that are different from 1965. They include the Shelby R-model–type front fascia, the BSI-built hood that makes room for the Edelbrock supercharger, the elimination of the side-vent windows, and the custom side-view mirrors.

Edelbrock’s E-force supercharged Coyote crate engine actually begins with a Ford Racing–built Aluminator long-block that has a lower 9.5:1 compression ratio compared to production Coyotes, which have 11:1. This makes it more suitable for supercharged applications. Though it uses a production aluminum block and forged-steel crank, it gets Manley H-beam rods and Mahle forged pistons, while the heads are fortified with 2012-2013 Boss 302 valve springs. The E-force blower uses Eaton TVS 2300cc rotors, an electric intercooler-water-pump, a heat exchanger, and a recovery tank. Fuel system bits include 50-lb/hr fuel injectors, an Aeromotive A1000 fuel pump, and a custom stainless fuel tank. A Ford Racing Coyote PCM makes it all run, while Ford Racing headers updated for the project by BSI and MagnaFlow mufflers are part of a side-exit exhaust system. Cooling is taken care of with a C&R custom split radiator/intercooler for the supercharger and Spal fans move the air underhood. With this sort of power being made, going cheap on the drivetrain wasn’t a good idea, so a 3-inch aluminum driveshaft connects to a Currie 9-inch with a 3.50 gearset.

Besides the larger transmission tunnel to allow the T-56 six-speed to fit, a good portion of the interior retains an original look. It has a minimalist vibe we prefer, and the 2006 Mustang seats, Flaming River tilt-steering column, LeCarra steering wheel, late-model pedals, Auto Meter gauges, and Vintage Air A/C meld right in.

Sizewise the wheel and tires are on the conservative side. No 22s here and we like it that way. Bodie Stroud and George Russo went with a longtime favorite wheel builder of ours by choosing Vintage Wheel Works and the company’s longest-running design that is known as the Vintage 45. Available in 15- to 18-inch diameters, the GT700S is fitted with 17x7s in front and 17x8s in back. The Kumho Ecsta SPT tires are sized for an ideal stagger, with P245/45ZR17s in front and just noticeably taller P255/50ZR17s out back. Putting the stop to it all are Wilwood brakes with 13-inch rotors all around and six-piston calipers up front and four-piston versions in back.

BS Industries designed and built the front suspension and it uses QA1 coilovers as well as a Flaming River rack-and-pinion. The company also did the same for the triangulated four-link in back and fitted Speedway Engineering front and rear antisway bars. 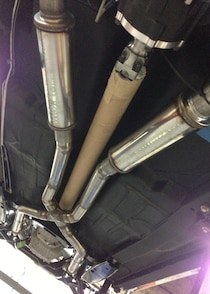