Nicest and Most Original 1969 Boss 429 Mustang on the Planet

Formula for a Purist: Not a requiem for a heavyweight 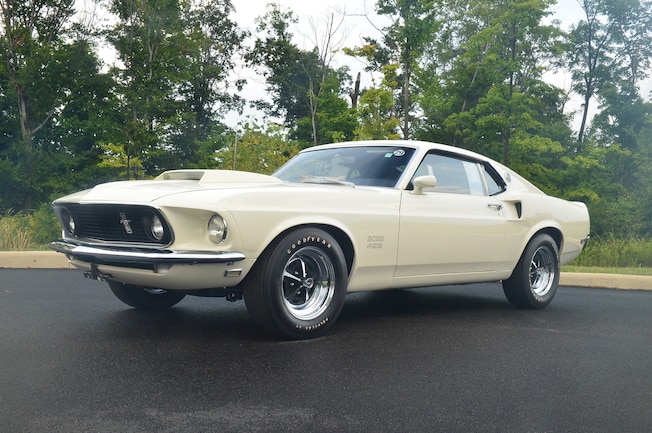 Hoards of car lovers insist that a person cannot enjoy a car unless that car is driven. Driving, they say, is the fun, period. No driving equals no fun. How can a person enjoy a car that is parked forever? To these masses, Richard Boeye’s statement, “This Boss will never be started or driven on the street. It will be maintained as a museum piece” must sound like sacrilege, the opposite of what a great American automobile was intended to be used for.

The odometer does show 49,000 miles, so this big-block SportsRoof with the NASCAR-derived 429 “Hemi” V-8 was driven and no doubt power-shifted, but well maintained for almost its entire life. A Boss 429 engine improperly maintained suffers, driven or not driven. But times change, and this car’s intended purpose has changed from those glory days of the 1960s.

Boeye pursued his appreciation of cars by purchasing a 1964 Plymouth Savoy “Race Hemi” and a 1969 Mustang Boss 429. He also mentioned a 1939 Chevrolet coupe powered by a Corvette V-8 that he drove after serving in the Army. Boeye and his friend Greg Lane of Denver spent years bringing the rare 1964 Savoy with a factory aluminum frontend back to the standards of originality. The 1964, Boeye says with a jaundiced twist of his tongue, “needed a lot of repair.” Repair in this instance is a euphemism for finding a date code-correct replacement engine and other N.O.S. parts, plus a specialty restoration to the car’s ultrarare factory build.

Boeye’s 1969 Boss 429 Mustang would set him on a path to gain what he really wanted in a car restoration. But first he had to buy the wrong Boss 429 that was supposedly “one of the best in the country,” but it turned out to not have the original engine and was missing a bunch of N.O.S. parts. Boeye realized that well-known Mustang expert and restorer Bob Perkins was the specialist he needed to restore his car to the original standards he wanted, since Perkins had the parts and the expertise. Boeye had him come to Denver and put the car on a lift, then Perkins began taking notes on a yellow legal pad.

That ended with Boeye sending the Boss with Perkins, to “restore it to the level he could accomplish.” But Boeye still wasn’t satisfied, because the car he started with did not have its original drivetrain so it could never qualify for Thoroughbred status—trailered concours was as high as it could go.

Richard Boeye’s Boss 429 was the first Mustang the MCA judged on a lift, as seen here at the MCA Grand Nationals in Columbus, Ohio.
Judges can see and assess the undercarriage so much better when they can stand up.
Correct factory orange peel in the paint is easier to see when the body is elevated.
Boeye’s 1969 Boss 429 comes out of its enclosed trailer with the help of an electric winch.
A great deal of fanfare attends the arrival of a Mustang to be judged in the Thoroughbred class at a Grand National. These cars are iconic (real heroes), the best of the best.
Boeye’s Boss 429 is minus the front spoiler because that’s the way the car arrived new from the factory to the dealership.

Restorers are not miracle workers. If the car doesn’t have the right drivetrain, it will lose points in a judging event, so if he wanted a real Thoroughbred car Boeye had to start over with a better car. Boeye realized that he was a purist, and as such he wanted a Thoroughbred class restoration to win an Authenticity award. That’s the path he took. Boeye made a trade of his restored (but not original) Boss, plus some cash, for a car that was already partially restored at Perkins’ shop; the owner of that car wanting to recoup as much of his investment as possible. To help the trade happen, Perkins told Boeye that this Boss 429 could go all the way in the Thoroughbred class.

Perkins completed the restoration on Boeye’s latest Boss 429. At the 2015 Mustang Grand Nationals in Columbus, Ohio, Boeye realized victory when the car won MCA’s prestigious Authenticity award in the Thoroughbred class. Cars must score 98 percent of 700 points using original parts—battery, tires, exhaust, and so on.

Boeye’s 1969 Boss 429 also turned out to be the first car the MCA has ever judged on a lift and is the third Boss 429 to win Authenticity in Thoroughbred. The other two Mustangs, Rick Campbell’s 1970 and Dave Steine’s 1969, did not have the benefit of a lift to judge the undercarriage. Richard Boeye’s goal of owning a Thoroughbred-class Boss 429 might sound like a requiem for a heavyweight, but instead it’s a formula for a purist.

With KK1257, Boeye finally got the Boss 429 that fulfilled his dreams. He writes, “I do not drive my cars because I want them to remain in good condition and be clean. It’s a completely different group of owners like Campbell, Steine, and me. (Steine owns the only other 1969 Boss 429 that has won the MCA’s Authenticity award). We don't intend to drive these cars. We intend to keep them as a piece of history, as a time capsule, and as an example of the car as-delivered in 1969.”
After judges finished judging the undercarriage, MCA members got a chance to view Boeye’s Boss 429 on the lift. The undercarriage contains myriad details that set an Authenticity award winner apart from a concours trailered restored car.
Original tires are “no-size” Goodyear Polyglas on Boeye’s Boss 429, meaning no F60x15 white letters.
This 1969 Boss 429 came with the original drivetrain; otherwise it could never win an Authenticity award.
The underside of the hood reveals the functional ram air for the 429.
Notice the plastic covers on the windshield wipers, as delivered to the dealer when new.
Boeye displayed his trunk with original paperwork and other documents.
This battery is original, meaning from 1969. Of course, the cells are dead. Starting is not a prerequisite for an Authenticity award.
The “KK” number on this car, 1257, is on a label above the trim tag on the inside edge of the driver’s door. KK sands for Kar Kraft.
Ford delivered Boss 429’s to dealerships with the spoiler, still wrapped in plastic, inside, as seen here. Bob Perkins bought a dozen of these spoilers, N.O.S., from Jack Roush in the early 1980s.
The spoiler protrudes into the front seat area on Boeye’s Boss 429 interior, which is original and mint.
Boeye (right) and Perkins (left) have become good friends, sharing a passion for Boss 429s and authentic restorations.
Boeye stopped for this photo with MCA judges that were part of a team that judged his Boss 429. That’s J.P. Snyder on the left and Bill Wirkus on the right and Boeye is holding his Authenticity award, one of three in ever awarded in MCA history.
This restoration is a total Bob Perkins job from start to finish.