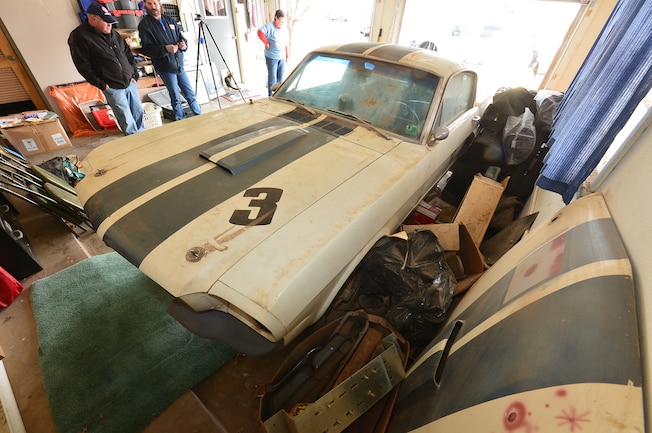 “You’re not going to believe this!”

Those were the words of Coy Harvey, who works for a pest control company in Lubbock, Texas, to Jeff Krueger, whom he previously worked with restoring classic Mustangs. While spraying a house for pests, Harvey opened the garage door to find a 1966 Shelby, buried under garden tools, baskets, Christmas ornaments, and assorted debris. It was one of those “Oh my God!” discoveries.

“All I could see was the driver’s side door and window,” Harvey says. He asked Marilyn Garrett, the owner of the house (and Shelby), if he could invite a friend by. Marilyn later told us, “I thought, What, you can’t spray by yourself?”

This is the sight Coy Harvey happened across. He immediately called his friend Jeff Krueger, who took this photo.
When we arrived, Marilyn’s son had removed the debris. Luckily they did not clean the Shelby. The paint and stripes are original, as are the dirt and cobwebs.

Krueger burned rubber to get a live look at the image Harvey had texted him. At the residential address in Lubbock, Krueger walked into Marilyn’s garage to sense, in his words, “one of those great moments in time.”

Krueger is past president of the Lubbock Mustang Club and owns a late-model Shelby Terlingua as well as numerous vintage Mustangs. For a few minutes he envisioned himself as the owner of this 1966 G.T. 350, but that wasn’t going to happen. Marilyn’s husband had recently passed away, so she did have thoughts of selling the car, saying, “I was kind of overwhelmed. I was thinking, I’ve got a whole racecar shop full to deal with!”

Her husband, Malcolm, had owned several race cars and built a shop for them in their backyard, and Marilyn was going to sell them. She already had fended off quite a few aggressive buyers, such as the one morning at 6:30 when, wearing pajamas and a robe, she walked into her garage to spy two legs sticking out from under the Shelby.

Krueger has suggested to Marilyn to keep the car as original as possible. In fact, he wants to show the Shelby, dirt and all, at some shows this upcoming year. “He’s my favorite honkey, King Tut.”
Marilyn’s husband, Malcolm, stored many of the parts between the garage wall and the driver’s side. The original hood, leaned against the garage wall, suffered frame damage.

Krueger and Harvey are real Mustang enthusiasts, and since they hadn’t committed breaking and entering Marilyn was happy to show them the Shelby. Krueger let her know he would be interested in buying the G.T. 350, but he did not want to press her into a decision. “Jeff very kindly, but painfully, just walked away,” Marilyn said.

The family had already made a hard and fast decision about the Shelby. Marilyn wrapped up their sentiments with humor when she told us, “My children said selling was not an option, or when I got older they would find the ugliest nursing home possible, and then they added ‘in Mexico’'!”

Marilyn had never opened the trunk. She was anxious to see what was inside—nothing but a trunk mat and air.
Krueger found the original Shelby Cobra tachometer stored in a box with the parts. This was a big find. Marilyn said her husband didn’t throw anything away—ever!

Three years passed. The racecar shop had been emptied, the shop itself becoming an apartment, but the Shelby still sat in the garage underneath 42 years of dirt and household items. Content with her decision not to sell, Marilyn called Krueger for advice on the next step. Krueger is in the carpet business full time but restores Mustangs on the side. He and his buddies call themselves the Texas Riff Raff Crew, of which this author qualified as a member despite no arrest record, stabbings, or warrants. Krueger and Neil Thompson invited me along to take pictures and record the story, which took place on Saturday, January 9, 2016.

When we arrived, the debris had been pulled off the Shelby despite Riff Raff pleas. What happened? “I was told, ‘Don’t take stuff off it.’ But my son came home for Christmas and he said he could stand it no longer, so he and his wife and two kids threw everything in my garage away.”

The 289 Hi-Po appears complete and original with a few modifications, such as the ignition box in the lower right.
Jeff Krueger pulls out the original front valance, which Malcolm replaced with an R-model front.
Jeff and Neil loaded the excess parts in the back of his pickup truck to haul to his shop. They decided against moving the Shelby to the shop on Saturday due to constant water dripping from the roof from melting snow that would have fallen on the car.

Luckily, the “everything” did not include a hoard of parts stored between the garage wall and the driver’s side of the car. Readers can follow along with our photos and the video online to share the vicarious thrill we had in finding a 1966 Shelby G.T. 350 parked in the same garage in the same spot since 1976. The biggest thrill awaited us upon inspection. The Shelby plate under the hood was dirty and dusty, and we could not read the number.

However, as we uncovered various components on the car, and when we got the Shelby sequence number (206) from Marilyn, it dawned on us that this 1966 was more than a 1966. This was one of the 252 “carryover” Shelby Mustangs that started out as 1965 model K-code Mustangs, and which share many of the mechanical features of the 1965 G.T. 350, including the override traction bars and lowered front suspension.

For now, Krueger might show the car in its Rare Find glory, dust and all, at a few car shows. Will it be restored or just made to run again? That’s still being decided—it’s Marilyn’s call—but at least the car will see the light of day again and perhaps turn a tire under its own power for the first time in 40 years.

Marilyn found this photo of Malcolm and his Shelby at an autocross event from the mid-1970s.
We ran across this photo of the Shelby G.T. 350 running a track event at an airport in the 1970s.
A valuable part of this Shelby’s history is Malcolm’s SCCA Competition Log Book And Driver’s Record.
The SCCA log book contained a record of every race this car ever entered.
Another SCCA log book contained more information as well as pictures.
The log book contained pictures to identify the Shelby, one for the front.
The log book also had this rear photo of the Shelby.
This No. 206 Carryover Shelby G.T. 350 got the 1965 rear suspension override traction bar Shelby modification. However, the rearend is not a Detroit Locker but rather a 9-inch.
Malcolm Garrett pulled the front passenger bucket and rear seat to save weight. Seats are 1965 type, as this Mustang was born a 1965 model.
Of course, we were not going to pop the Shelby VIN plate under the hood. Krueger wanted to leave the dirt in place. However, the VIN underneath this tag will reveal a San Jose–built K-code Mustang fastback for the 1965 model year—“5R09K” will be the first five characters.
The front end of Carryover G.T. 350s in 1966 also got the 1965 lowered A-arms, a costly modification. Marilyn has cats but had no cat door for a number of years, which is why she often left the garage door open; many people spotted this Shelby but, to their dismay, could not purchase it.
A little surface rust peeks through the front fender below G.T. 350 stripes. “BP” stands for B-Production in SCCA amateur road racing. Those were the days, my friend. They did end, but the car lives to race another day.
To the right in the photo is Coy Harvey, the pest control man who found the Shelby and texted a photo to his friend, Jeff Krueger.

In the 1970s, Marilyn permanently lost the keys and the right to drive the Shelby as a result of a street racing incident. She explains, “I was just a cute little college girl. I was driving home from Texas Tech and I came up to Indiana Avenue. I was sitting there, and these guys pulled up beside me—varoom, varoom. Well, OK, what are you going to do? So we took off, and I was going about 80 mph down Indiana, and I left him in the dust. I was really proud—I’m afraid our family then had the iniquity of speed. So I came on home, but Malcolm came right in behind me. He had been sitting at the Indiana intersection going the other way and saw me take off. He just turned and followed me home. Very quietly, so that he would not give in to wife abuse, he just said, ‘Hand me the keys.’ I never drove it again, so sad. I was pretty good. I could really drive it.” Malcolm was a racecar driver, but he was also Marilyn’s insurance agent—not a highly compatible pairing. She says, “Can you imagine me driving that car up to school in front of all those boys?” She plans to drive the Iniquity of Speed to high school one day and be the “coolest little old English teacher on Earth.”