Turbo Time: The Mustang SVO’s displacement may be small, but built correctly it has the capability to be mighty 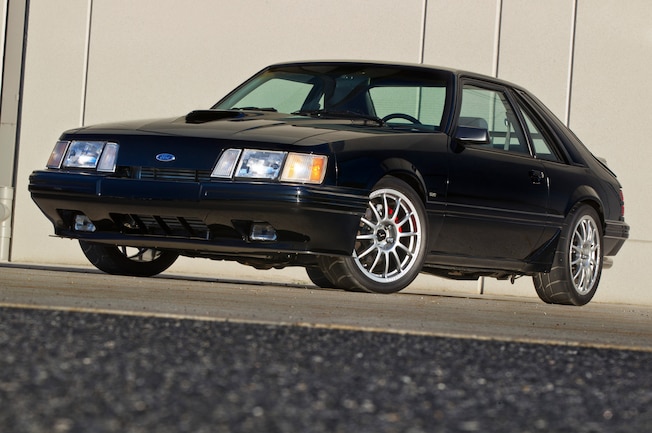 Jason Franklin of Canton, Ohio, has had his hands in 2.3L turbo engines since 1998, when he began building a 1987 Turbo Coupe. “I was very impressed with how much power these little motors could make with just a couple of bolt-ons and some more boost,” he says.

Fast-forward five years. Franklin has built a high-powered 2.3L turbo running in a 1970 Datsun 1200, brought it to the track, and laid down a staggering 10.20-second quarter-mile, trapping 134 mph. “The drag car was fun, and I loved the challenge of making this little four-banger go, but the time had come to move on. I have been around Fox Mustangs since high school and always wanted one.”

The time came in 2008, when Franklin ran across a complete (albeit less than perfect) 1986 SVO for sale at the Carlisle Ford Nationals in Carlisle, Pennsylvania. The Fox combined his long-lost love of 2.3L turbocharged engines with a Fox-body Mustang, and he knew he had to have it.

Franklin and his father scrounged together whatever cash they had and offered $1,000 for the car. After a few minutes the owner agreed and Franklin was officially the owner of his first SVO Mustang.

He brought the pony home, replaced the fuel pump relay, and added fresh gas. It fired right up. The dry-rotted tires were replaced, as were the bushings, rag joint, broken front lower control arm, and rotted exhaust. The SVO was back on the road. After a year of driving it in stock form, Franklin sold his drag car and decided to build the “ultimate SVO Mustang.”

He says, “I wanted something that I could drive on the street that had the same power as my drag car. I began by stripping the car down to bare metal and removing every single piece that could be unbolted.”

The body was sent off to paint and Franklin turned his attention to the powerplant. The stock block was bored 0.030 over and line-honed. ARP main studs and a Canton girdle were installed, and a stock crank was used with King bearings. Esslinger Engineering billet steel rods and CP pistons finish off the rotating assembly. Boport Racing Heads of Fremont, California, built a Stage 3 cast-iron head with a solid-roller cam, large valves, and plenty of port work before the heads was bolted over a Titan ICS solid copper head gasket with ARP undercut head studs.

An Esslinger billet intermediate shaft, adjustable cam pulley, auxiliary shaft pulley and timing belt tensioner, and a custom harmonic balancer made by Romac were installed. A custom inline aluminum intake manifold was built and fit with an 80mm BBK throttle-body. Boport stainless steel headers with a wastegate port (and TiAL 44mm V-band wastegate) were bolted on. A Turbonetics T-66 turbocharger provides the boost.

Custom 3-inch aluminum intercooler piping connects the turbo to the CX Racing 3-inch core front mount intercooler and back into the throttle-body, and a TiAL 50mm blowoff valve relieves boost pressure. A Walbro 255 LPH in-tank pump flows through an Accufab regulator to Seimens 96-lb/hr injectors to provide adequate nourishment to the engine. Keeping it cool is a BeCool 1965-1966 Mustang crossflow radiator with an electric fan controlled by the ECU.

Exhaust is carried through a 3-inch downpipe from the turbo to a split behind the tranny into 2 1/2-inch dual pipes with MagnaFlow mufflers and 3-inch tips. A Quick Time Performance 3-inch electric exhaust cutout dumps right under the driver’s seat.

Franklin says, “I just couldn’t do without the open downpipe sound. Now I can enjoy the sound at the flip of a switch, which is hidden under the dash.”

An 8.8 rearend with welded axle tubes and a custom welded brace is stuffed with Ford Racing 4.10 gears, a Detroit Locker, and Moser 28-spline axles, and topped with an aluminum SVO girdle.

To dress it up, the K-member, rearend, transmission crossmember, front lower control arms, intake manifold, and pulleys have all been powdercoated by BJ Meyer at Meyer Coating in Canton.

Shifting is done through a V-8 T-5 that has been rebuilt and had the input turned down to fit the 2.3L pilot bearing before being matched to a Spec Stage 3 clutch assembly and aluminum flywheel.

In terms of the Mustang’s appearance, Franklin decided on Team Dynamics 17x8 wheels wrapped in NT-01 track tires. “I would never want to get caught out in the rain with these tires, but they have tremendous grip and keep the rear planted during spirited driving and hard acceleration.”

Though the car has never been on a dyno, he estimates the power ratings in the conservative measure of 425 hp to the rear wheels (based on past engine combinations and tunes at 20-22 psi). He says that he runs 93-octane with a bottle of Torco Accelerator, which “boosts the octane to around 100 for a little safety margin.”

Franklin says, “I do all my own tuning and have a nice air-fuel ratio of 11.2 to 11.3:1 under full boost. After two and a half years and countless amounts of blood, sweat, and tears and some cursing, not a nut or bolt has been left untouched, and I’m proud to say I know every detail of the car.”

Franklin credits the online Turbo Ford community for unlimited technical advice and help throughout the build, as well as Keith and Roger Decker of Canton Automotive Machine Service for their “meticulous engine building skills,” and his wife and daughter, Kristin and Tori, for all of their support and encouragement. 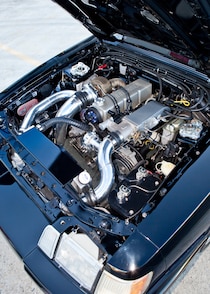 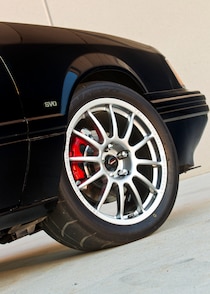 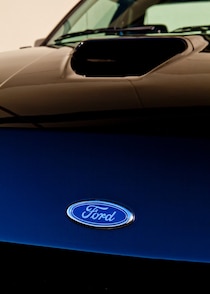