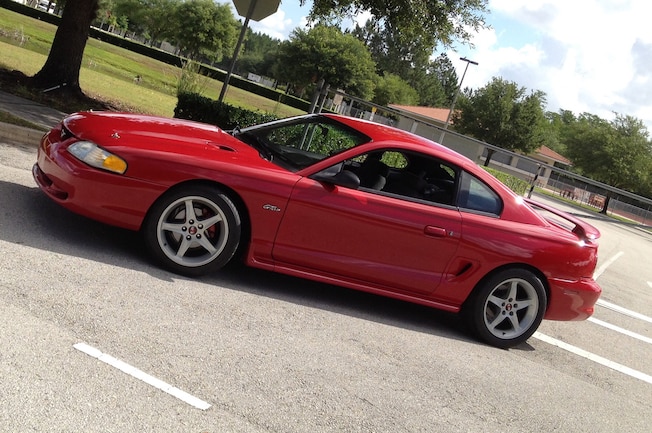 Richard Nocero Sr. from Jacksonville, Florida, is the original owner of this 1996 Mustang GT. During the 20 years of owning it, he has swapped the factory mill for a Terminator block with a forged Livernois rotating assembly, along with a pair of Trick Flow heads and camshafts from Comp Cams. Shifting duties are provided by a Ram billet steel flywheel, a McLeod clutch, a street/strip-built T-45 source transmission, and an aluminum driveshaft. For handling, the suspension consists of Eibach springs, KYB shocks, BBK upper control arms, and Mega Bite Jr. lower control arms. Rollers consist of Ford Racing Cobra R wheels wrapped in 245/45/17 front and 275/45/17 rear rubber. All tuned, it made 345 hp and 310 ft-lb of torque. Best time down the quarter-mile so far is a 12.8 at 110 mph. His son, Richard Jr., sent this in to honor his father and the hard work that he put into the car. “He has built everything himself and has raised me with the same passion,” Richard Jr. tells us.