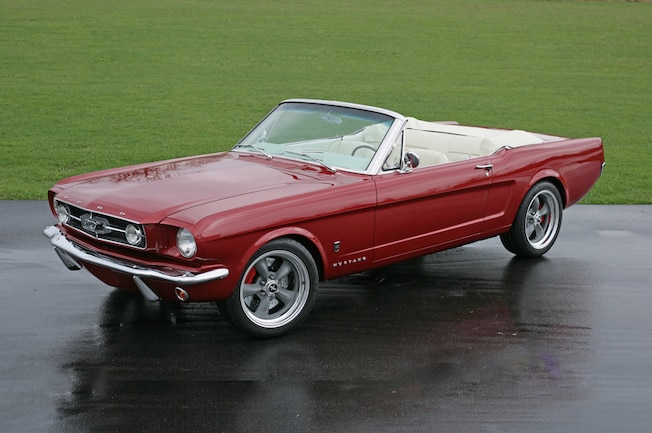 In April 1964 Ford introduced the Mustang. It was designed to appeal to women, and was displayed to the public that year at the World’s Fair in Flushing, NY, where I first saw it in person. Not long after, I saw it everywhere, and the legend was born. An American icon then, and still an icon after a half-century!

Years later Paul Fix, Mustang restorer and owner of Classic Tube and Fix Motorsports, wanted to do a Mustang buildup with his daughter Shelby, so they started a search for a relatively rust-free ’66 convertible. Through his nationwide Mustang connections, Paul found an original condition candidate in Southern California. While his preference is restoration, Shelby wanted “her” car updated both cosmetically and mechanically. Smart lady!

Shelby Fix was not a bystander during the rebuild. She participated in almost every facet of the construction and now is the principal driver and owner.

After the car arrived back at Fix Motorsports, the parts list was made for the buildup. The convertible was completely disassembled, the body mounted on a rotisserie, and the work began. Paul had the parts bead blasted, then steam cleaned the body and chassis and other parts to remove any residual residue. All the sheet metal, with the exception of one front fender, was usable. There were a few nicks, dings, and minor rust spots to repair, and then the body and parts were ready for primer. Since Shelby wanted a head-turner, the ragtop was painted Candy Apple Red Clear Coat Metallic by Millstream Auto Body in Tonawanda, NY.

Here’s the heart of the beast. The beefed up engine features a Holley 600cfm carb, dual-plane intake from Cobra Automotive, Comp Cams “hipo” camshaft, Virginia Mustang valve covers, a Branda Performance oil pan, and the heads were ported and polished by D&H Performance.
The engine bay color accentuates the detailed 289 engine. As of this writing there are no dyno figures available, but after looking at the parts installed, they should be impressive.

The engine is a 289 bored .030-over with the heads ported and polished. A Comp Cams hydraulic cam, Cobra dual-plane intake with Holley 600-cfm carb let good air in, and Tri-Y Headers with custom H-pipe blowing into a Flowmaster dual exhaust system to get out the bad air. Externally the engine features Cobra open-letter valve covers, a Cobra aluminum T-pan, a billet aluminum pulley set from March, and a dual-point Autolite distributor.

A Tremec World Class T-5 five-speed transmission conversion (M-7003-Z) from Ford Racing transfers the power through an aluminum three-inch drive shaft from Denny’s Driveshafts to the 8-inch rearend. The limited slip and Auburn 3.80 ring and pinion is from Summit Racing.

The black powder coated front coil springs are rated at 620 lbs-in with the one-inch Shelby lowering modification to the upper control arms. The rear leaf springs are mid-eye, 4 ½-leaf units rated at 175-pounds. Up front the Mustang has a 1-inch Shelby sway bar and Koni shocks all around. To assist driving ease, a Borgeson power steering conversion kit was installed, using the Shelby quick steering idler and pitman arms. This street cruiser will carve the cones as well as track straight on the road.

With this potent drivetrain and suspension, the brakes must also be up to the challenge. The four-wheel disc brakes SS4+ front and rear 13-inch brake kit, with cross drilled and slotted zinc washed rotors and etched Shelby logos, are from Baer Brakes. Classic Tube stainless steel brake and fuel lines, incorporating a dual-chamber master cylinder and proportioning valve were installed to handle the Dot 5 fluid. StopFlex® stainless steel braided DOT brake hoses were also installed to provide a consistently firm pedal pressure and longevity.

Shelby is finishing the installation of the exterior trim, here installing a headlight bezel. She has worked on many cars with her father Paul, but this one is understandably her favorite. 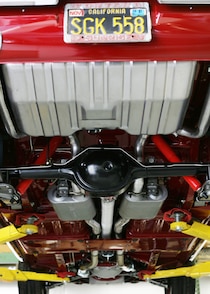 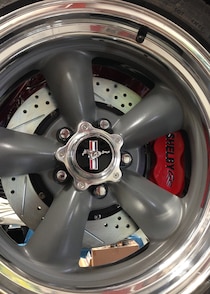 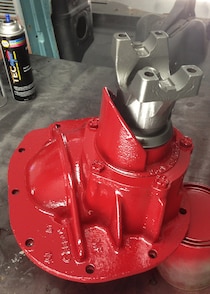 Let’s move to the interior. The Candy Apple Red exterior is complimented by a beautiful stock white interior with red carpeting. Sounds are supplied by Custom Auto Sound stereo through booming kick panel speakers. The top is also matching white for a stunning overall appearance. The interior parts are from Virginia Mustang. Looking to build a custom early Mustang? Use this one as a guide!