The Black Stallion: With more than 800 horsepower, Jay Jancetic’s GT500CR is certainly one of the strongest horses around 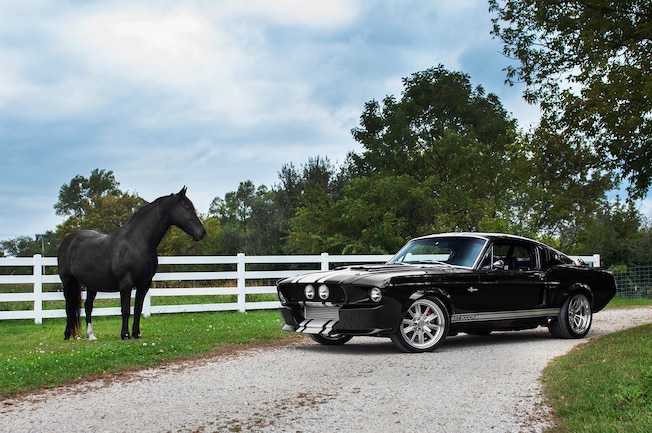 Classic Recreations builds its Shelby GT500CR right in America’s heartland at the company’s Yukon, Oklahoma, facility. So, three years ago when Jay Jancetic decided he wasn’t going to mess around with some dumpy old Mustang with a stock 289 two-barrel or something similar, he stepped right up to the car you see here.

Jancetic had recently bought a 1966 Fairlane built exactly how we wanted. Yeah, there’s something about the idea of a car being right on the money from the get-go. Many people swear by the adage, “Built not bought.” That’s fine, too. But often, there’s merit to locating and buying a car exactly how one would want it, driving, and enjoying it now.

Jancetic’s otherworldly Shelby built by CR, starting with either an aftermarket or original 1967-’68 Mustang fastback shell (this car is a real 1968). The build started from the ground up with a full media-blast treatment, any necessary sheet-metal replacement, and sealed it all up in top-notch bodywork and paint. A custom CR Shelby body kit with sequential Shelby-style taillights, GT500CR emblems, and a Shelby-style LeMans gas cap were added to the body while it was being worked on. CR also installed custom rocker panels with molded-in side-exit exhaust, a custom fiberglass hood with aluminum hood pins, and a carbon-fiber trunk lid.

After CR whipped the bodyshell into shape, they didn’t put just any crummy suspension parts underneath it. Up front, it is fitted with a Rod & Custom Motorsports Mustang II suspension that eliminates the shock towers. It is, in turn, home to a Rod & Custom power rack-and-pinion steering setup, QA1 coil-over shocks, and an Afco adjustable anti-sway bar. In addition, a Flaming River tilt-steering column was placed.

In the rear, a Total Control Products G-link rear suspension takes center stage, with TCP’s Vari-Shock rear coilovers, and a TCP adjustable anti-sway bar. A welded-in roll bar and custom-built sub frame connectors tie the foundation of the car together.

Big-inch Windsor-based strokers—a popular route these days—are hard to beat for their 600-800 horsepower output. Keith Craft Racing built the engine starting with a Dart 351W block, and using custom Diamond pistons, which net an 8.5:1 compression ratio. They are fitted in a 4.125-inch bore, and combined with a 4-inch stroke, yield the coveted 427-cube displacement. A Lunati billet hydraulic-roller cam moves the valves in AFR 205cc aluminum heads. They house an Edelbrock Super Victor 351W single-plane intake, which has fuel-injector bosses in each runner for the FAST sequential EFI system. All these bits would make plenty of power on their own, but there’s more to the mix: a ProCharger F1-R blower, a Treadstone intercooler, and a ProCharger blow-off valve. With a custom CR tune and 21psi of boost, the combination is good for 785 horsepower and 685lb-ft of torque at the wheels.

Other supporting-cast pieces for the engine and other areas include an MSD Pro Billet distributor and MSD Blaster coil, a Concept One front-dress setup, Aeromotive dual electric fuel pumps and an Aeromotive Stealth 22-gallon aluminum fuel cell. The exhaust system starts with BBK full-length ceramic-coated headers and includes a 2 ½-inch exhaust system with Magnaflow mufflers. For cooling, CR fits a Becool crossflow aluminum radiator and overflow tank and a pair of 13-inch electric fans.

The drivetrain includes a Ford Racing billet-steel flywheel, a McLeod twin-disc clutch and a Tremec TKO 600 five-speed, all of which channel the power to an Alston Chassisworks FAB9 rear end housing. It’s equipped with 3.50 gears, a Torsen limited-slip differential, and a custom axle-fluid overflow dump.

As we alluded to earlier, Jancetic wanted this car because it can be considered the ultimate vintage high-end Mustang. While up there price-wise alongside some fairly serious European exotics, many of those cars don’t have the same cache of a vintage Shelby Mustang—a legacy more than a half-century in the making.

Wheels, tires, and ride height are often the make-or-break elements of a car’s overall look. Here, it’s all exactly right with this GT500CR’s American Racing Shelby 427 wheels and Pirelli P-Zero Rosso rubber. The front wheels are 18x8s with the 225/40ZR18 tires, while the rear 18x11-inch wheels are fitted with ginormous 315/30ZR18 rubber. Getting it all slowed down are Wilwood six-piston front and four-piston rear Touring System brake calipers, which clamp down on Baer cross-drilled, zinc-washed rotors.

The 427W was built using a Dart block, AFR heads, FAST EFI, and a big ProCharger blower, which combine to generate well beyond 800 horsepower. And it looks great, too.