Not one, but two micro Mustangs for Roger Nitti 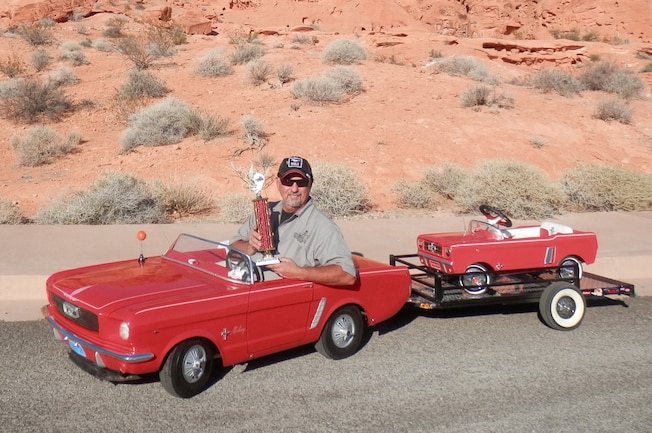 In April 2015, we brought to you the story of Roger Nitti and his Mustang Junior, built by the Powercar Company with the cooperation of Ford Motor Company, for dealers to use as showroom promotional tools. Roger is the original owner of this micro Mustang as his dad Joe Nitti (builder of the famous purple ’32 Ford roadster that is considered one of the Top 75 Roadsters of all time) bought it for him from a Ford dealer in 1965 for $537.

As an update if you don’t remember our original story on the car, Powercar Company built just over 600 of these Mustang Juniors, some gas-powered and some electric, and took them to dealers to promote the new Mustang, as well as taking them to schools for kids to look at and collect “tickets” to get their parents to visit the dealership. They also raffled some of them off. Roger’s car is serial number #324. The mini Mustang originally had a 2.5hp Briggs & Stratton engine but Roger has since replaced it with a 7hp Honda generator engine with electric start (thanks to Geoff Warner at Vegas Carts & Performance), so the car will run up to 31 mph now. Roger also had Henry Mendoza redo the interior (complete with a “top boot”), cut the “trunk” open for better access to the engine, and has had it repainted several times. Lenny Ribaudo from So Cal Speed Shop in Las Vegas (where Roger lives now) did the pinstriping over Dan Mann’s paintjob.

We’re updating this story because Roger just scored another mini Mustang, a pedal car that he can now tow behind the Junior. He’s already begun “tricking it out some” and will bring the whole shebang to the 2016 Fabulous Fords Forever show at Knotts Berry Farm, where we’re trying to set up a road test of the little cars.