Make No Mistake, This Incredible 4-Eye Pony Started Life as a 1991 Fox-Body Mustang 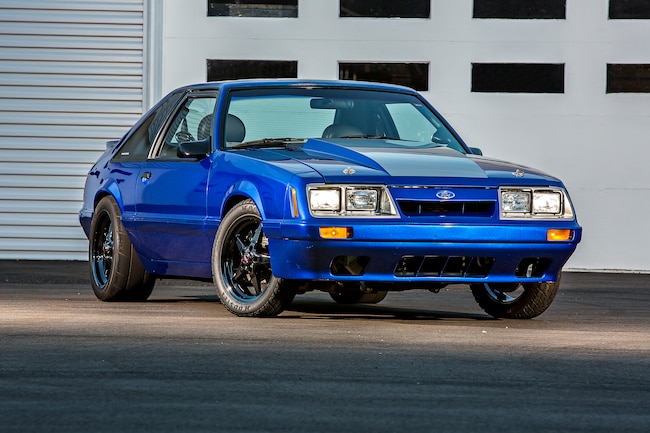 “I’ve been working on cars and engines since I was 15,” says Joe Murray. “I never had a ‘good’ cool car. Never had anything to really be proud of. I always thought that mechanics were supposed to drive rough cars.”

But then in 2000, Murray changed his life. No more wrenches. No more dirty looks. When he became an outside repair tech for AT&T, he was able to view the world through a different lens; the way he thought about it changed as well. He wanted to build that Mustang now, so he found one. His loving wife Kris was down with it, but stipulated that it had to be a Fox-body because that was what she wheeled in high school.

Murray found the lump behind a body shop. He handed over $900, stashed the hatchback, and spent the next year amassing a war chest. His criterion was simple: He vowed to never drive it in suede. His priority was paint. But the Fox needed an entire front clip. Murray always liked the four-headight arrangement of the early examples and found an 1986 GT nose for it . . . then he fired up the Sawzall.

The Fox had been punched hard in the left front and the frame was pushed in on the driver side. The rear of the car was crawling with decay. He cut out the trunk floor, fixed some rust in the rear framerails, and put a patch panel on a rear lower quarter. While the space was wide open, he also took opportunity to fabricate a niche for the 16-gallon aluminum fuel cell from 1-inch square tubing.

Though you might think he would want the rigidity of a live axle, Murray prefers the flexibility of a low-mileage 2003 Cobra IRS system that he copped for $700. Further, he gave it the “hard tail mod,” reducing the height of the (wheel side) bolt heads and eliminating the subframe bushings to fit huskier rubber without interference. Inside the center section are 3.55:1 gears and a limited-slip differential.

Murray put the system up with the OE upper and lower control arms, Bilstein shock absorbers, Cobra convertible springs (with three-quarters of a coil removed), and a stock rear bar. To tighten the shell, he fabricated subframe connectors from 1 1/2-inch rectangular tubing. For the rims and rubber, Murray fitted his street/strip/show tripper with provocative 17x4.5 and 17x9.5 Race Star Drag Star hoops and 27x4.5 Hoosier Pro Street and 275/40 drag radials. To grind off energy, he leans on 13- and 12-inch Cobra disc brakes.

Along the way, Murray hammered a couple of T-5 transmissions senseless and unraveled their clutch assemblies as well before a small voice urged “you need an automatic with an overdrive feature.” And so it was: Don Stanley at TSI Transmissions (Addison, Illinois) outfitted an AOD with their shift kit and a 3,500-stall converter and supplemented it with a B&M fluid cooler. Murray created the vital link with a shortened aluminum driveshaft.

So what’s the bullet? An iconic 306ci that Murray built is what. He went more for reliability than berserker grunt but there’s plenty of cool detail in between. However, Murray wants to eventually upgrade to an aftermarket block so that he can cram more boost in it without worrying about splitting the case. All the parts went to Speed Performance Engineering in Wauconda, Illinois, for preliminary modifications and then back to Murray for assembly.

The stock 302 crank was paired with 0.030-over Speed Pro forgings and shot-peened and resized connecting rods. Murray capped the bottom-end with a stock pan covering the Melling oil pump, ARP pump shaft, lower support, and windage tray. Murray had some Ford Racing GT40-Y aluminum cylinder heads sitting by. He ported-matched intake runners and gasket-matched the exhaust openings. He unshrouded the valves and polished the combustion chambers. He did the three-angle valve job on the 1.94/1.54 valves before Steve Coil (Racing Engines, McHenry, Illinois) did the actual assembly. He included Ford Racing 1.6:1 ratio aluminum roller rockers. The camshaft is a Trick Flow Specialties Stage 1 maintaining 0.499/0.510-inch lift and 221/225 degrees duration at 0.050-inch with a lobe-sep angle of 112 degrees.

Induction storm forms at the Holley Systemax II intake manifold hosting a BBK throttle-body and an Abaco DBX 97mm mass air meter, a UPR powerpipe from the MAF to the blower inlet spliced by a Vortech bypass valve. Fuel is sourced from 42-lb/hr injectors and two Walbro 255 pumps, one inline under the fuel cell, the other in the tank. The regulator is a Kirban adjustable set to 48psi. Master control is from a stock Ford EEC-IV piggybacked by an Anderson Ford PMS controller. Positive manifold pressure (12 psi at 6,000 rpm) is generated by a Vortech V-2 SQ supercharger. No aftercooler is used.

Those other essentials, ignition timing and exhaust scavenging, are the province of an MSD 6AL box, stock coil and distributor, Firecore 50 wires, and Autolite 3924 spark plugs. Exhaust flow begins at the BBK equal-length shorty headers (1 5/8-inch primaries) and is abetted by a Magnaflow X-pipe and Borla cat-back mufflers captured in a 2 1/2-inch system. Mike Post of dynotuneMP.com tweaked the package to produce 505 hp at 6,000 rpm and 460 lb-ft at 5,000 rpm. This, in turn, tells the Mustang to run 11.46 at 121 with a 1.68-second 60-foot time.

The Fox has colorful clothes, not primer paint. Here’s how it got that way. Murray custom-built the lower radiator support from 2-inch aluminum square tubing. He continued with the front bumper and turn signal support, built from 1-inch tubing. He extended the lower rocker panels about an inch and pulled down the front fenders to match them. He rolled the rear fender lips to clear the tires.

Renaissance man Murray tried to paint it, too. “All was going well until I ran out of clearcoat. The second gallon of clear had a different drying rate and screwed up the base. The paint looked like leather. It actually peeled off like badly sunburned skin.”

The late Rex Olson (Rex Auto Body, McHenry, Illinois) saved the day. “I went there and said ‘Here’s my credit card. Paint it.’” And Rex did, with lots of DuPont Chromabase Daytona Blue.

As for the cockpit, Murray fixed the interior to include several shades of Mustang: 2003 Cobra seats, 2004 Cobra carpet, 1999 dashboard, 1995 gauge cluster. He built the door panels from SN95 items. He is hot to do some autocrossing and open track events, so a rollcage (and larger front wheels) will follow.

And so what of this slow-cooked project that has taken more than 10 years to evolve? As for audience appreciation, the Fox won First Place at the Route 66 Nationals in 2008. Last spring it got another high honor, taking First at the World of Wheels show in Rosemont, Illinois, fulfilling Murray’s lifelong dream. “Our son is 14 now and may eventually get to drive this car to school someday—as long as his grades are good.” 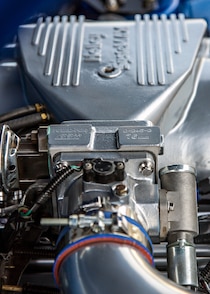 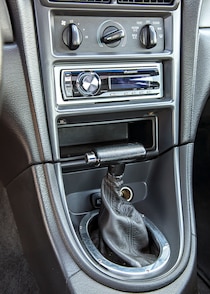 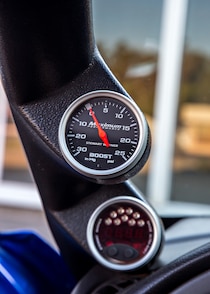