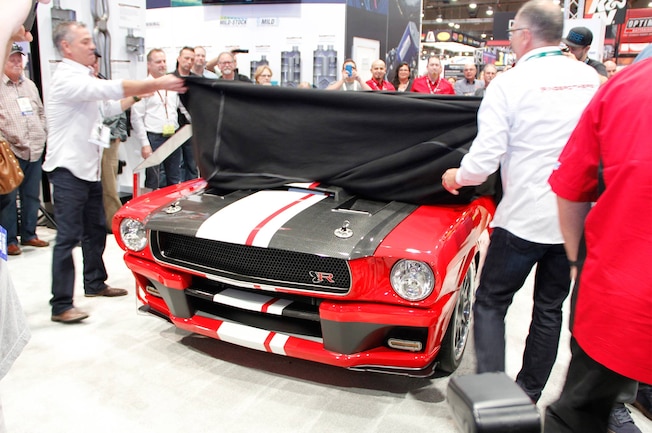 Just when you thought 1965 Mustangs had been built to the best they can be, the Wisconsin-based Ringbrothers kill it with the SPLITR fastback at the 2015 SEMA Show. Its classic looks are there, but the bodywork changes and little details make you stand and stare.

The first thing Mike and Jim Ring did was to trim the bottom of the front fenders and extend the rocker panels forward to the bottom of the trailing edge of the wheel arch. Then they extended the rockers down 1.5 inches and wrapped them under the chassis to meet a secondary flat floorpan. As a result, the SPLITR has a totally flat undertray like a race car. The paint is BASF Glasurit 90-Line Waterborne Ford Race Red finished with a satin clear.

The hood is carbon fiber. Under it is a 427-cid Windsor from Ford Racing with a custom airbox made of aluminum and Lexan over the MSD Atomic EFI. The transmission is a Tremec T56.

It handles, too. The SPLITR uses a Detroit Speed Engineering AlumaFrame front suspension system with a cast-aluminum cradle, custom-tuned steering rack, JRI coilovers, and tubular control arms. In the rear is a QUADRALink suspension system also with JRI shocks. The brakes are Baer 6S Extreme calipers with 14-inch rotors front and rear. The wheels are custom forged HREs wrapped in Nitto Invo tires sized 265/35ZR18 in the front and 305/30ZR19 in the rear.

The interior of SPLITR feels as race-car-inspired as the exterior with comfortable and supportive Recaro seats, Ringbrothers billet components, an IDIDIT steering column, gauges by Classic Instruments, and a cabin kept at a comfortable temperature thanks to a Vintage Air SureFit system.