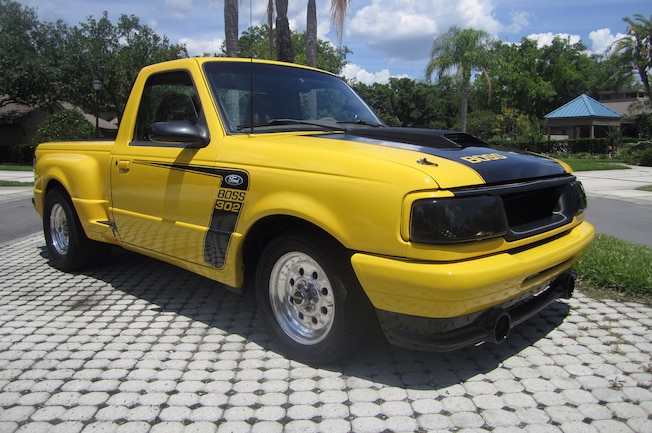 Tampa man Joe Henry picked up this used 1994 Ranger Splash a couple of summers ago with a blown head gasket. He shoehorned in a balanced and blueprinted 302 Windsor that sports AFR aluminum heads, a Comp Cam (custom grind 555/575, lift 236/242) with a tight LSA bumpstick, and an Edelbrock RPM dual-plane intake with Joe’s tricked-up Holley 650 being air-fed through a Cobra Jet hoodscoop. It also features an MSD and water/alcohol injection for the 11:1 compression and full-length headers. Everything installed only added 85 pounds over the original four-banger engine. Needing some spine to back up the power, a T-5 transmission with a 2.95 First gear was installed, as were a 9-inch rearend with a Posi and 4.88 cogs. For grip, CalTracs and 325 Nitto drag radials fit under even though the truck was lowered 4 inches all around. Fresh disc brakes were installed on all four corners to stop all of that power. The Ranger was put on a crash diet with the factory seats replaced with much lighter Corbeaus, and another 100 pounds of extraneous parts were removed. All said and done, the Boss 302 Ranger weighs in at 2,980 pounds and puts out about 425 hp.