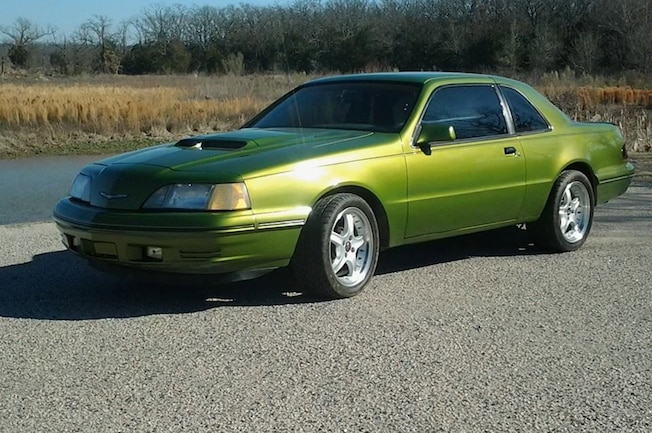 Vincent picked up this 1988 Fox-body Thunderbird Sport from a salvage yard about 15 miles from home. Piece by piece he started saving it, and now he takes it grocery shopping and to the track, cruises the highway, and graces a few car shows in between. Everything has been replaced except the brakes, which are next on the list. Inside the car is a 5.0L engine with an Ed Curtis custom camshaft from Lunati, Trick Flow Twisted wedge 170 heads, Scorpion roller rockers, GT-40 tubular intake with TMoss ported lower, 70mm throttle-body and EGR delete spacer, a 1993 X3Z Cobra computer and MAF, 24-pound injectors from Summit Racing Equipment, an MSD billet distributor, and Canton aluminum valve covers. He also installed a 130-amp 3G alternator, smog and EGR delete, and a three-row aluminum radiator with an electric fan out of a Ford Taurus. Delivering fuel is a 255-lph fuel pump and an Kirban adjustable fuel pressure regulator and fuel pressure gauge under the hood. Air and exhaust gases are routed through a BBK CAI setup, shorty headers, and an off-road H-pipe to Flowmaster mufflers. It also features a BBK strut tower brace, a hand-fabricated aluminum belt cover, and a steel filler panel between the core support and header panel. Transmission is a Ford Racing Z-Spec T-5 with a Hurst billet shifter and a pistol-grip shifter knob. Vincent also added an aluminum driveshaft from a Crown Vic, an 8.8 rearend with 3.55 gears, CHE tubular control arms, SN95 lowering springs, a Ford Motorsport 140mph speedo, sequential tails, and deep Cobra R wheels. The exterior is DuPont Pop Green Effect and has a 1972 Torino hoodscoop grafted to clear the intake manifold. It also has a custom ducktail spoiler, a 2004 Mach 1 chin spoiler, and a 2004 Bullitt fuel door painted to match. The header panel and front bumper came from a Turbo Coupe T-bird.

For sale is a 1986 Ford Thunderbird tribute that is a purpose-built car with a paint job in tribute to the Indiana-based hero, Bob Glidden.

This 1986 Ford Thunderbird will be staying in the family when the owner hands it over to his son on his 18th birthday. Check out the mods he made.

Check out this 1955 Ford Thunderbird that was listed for only $1,850 when owner David Craig purchased it. When a teenage David Craig asked his Mom to co-sign a car loan in 1959, she might well have wondered if she was making the right decision. Half a century later, all her concerns have been laid to rest.