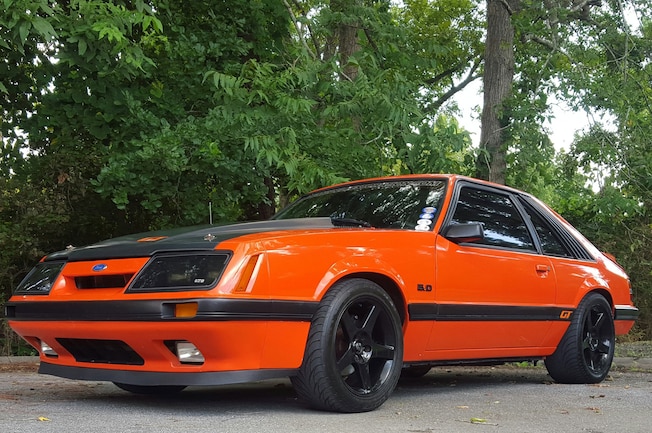 North Carolina resident James Withrow bought this four-eyed 1986 GT back in February 2010. It was white with a red interior with a tired 302 and an AOD on its deathbed. When James purchased it he had intentions of turning it into a street/strip car. His grandfather rode along to pick it up and had asked him what his plans were for the car, and James responded, “Make it fast.” Not caring much for his plan, his grandfather thought that he should restore it and take it to car shows instead. Two months later James received the call that nobody ever wants to receive; his grandfather and best friend had passed away. That’s when James decided to take his grandfather’s plan to heart. Even though the car is a work in progress, he takes it to three or four shows a year. The obvious change is the custom orange exterior, but he also added an all-black interior; freshened up the 302; added a five-speed transmission, a five-lug conversion, and full exhaust; and threw on some black Cobra wheels (17x9). James has more tricks up his sleeve and hopes to make it a real showstopper soon.