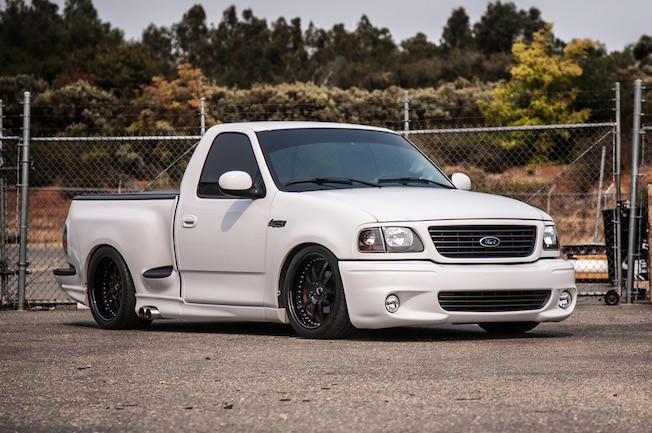 The Wallaces are the sort of family you want to buy a used vehicle from. This 2003 Ford Lightning managed to survive all its life without an accident, a door ding, a drop of rain, or even bird droppings. Heck, occupants not only put their derrieres on microfiber towels, but their shoes as well. And don’t even think about slamming the doors—hey, you gotta keep it clean, right? This Lightning is that nice. In fact, it has won every show it has entered, and quite frankly, photos do it little justice. But it takes more than just meticulous upkeep to make the pages of MM&FF. Prerequisites are a healthy mod list, big power, and stunning good looks; a unique backstory doesn’t hurt either.

Funny thing is, rather than a mile-long mod list, this white Lightning is proof that it’s not the amount of parts that matter but rather how they complement one another. Instead of throwing the book at it, owners Drew and Olivia Wallace decided to add well-placed modifications in stages to ensure that the end goal would be one congruent package.

“When we bought the truck from the original owner it was box stock,” says Wallace. “Rather than immediately adding a ton of mods, we thought at length about each modification before adding it. We started with a mild drop and the manifold-back Bassani exhaust system for a lower stance along with a nice note and a slight bump in power.”

Speaking of power, everyone knows it’s insanely easy to add power to the second-generation Lightnings. “These trucks make great power with only a few modifications, so we added a JLT CAI, a Metco 4-psi lower pulley, and a 91-octane AED tune,” Wallace explains.

Despite just a handful of mods, the truck threw down an impressive 401 hp and 503 lb-ft at the wheels. In its current state, with the 20-inch wheels and air suspension (more on those later), the truck has run countless mid 13-second passes—how’s that for show and go?

Speaking of show, although the exterior appears largely stock, it has received a handful of tasteful mods that are easy to miss. “We separated the stock headlights and corner lights and painted the surrounds black,” says Wallace. “It’s a nice touch that looks nearly OEM if you’re not familiar with Lightnings.”

Beyond the factory-fresh headlight modifications, while the Rolling Big Power black billet gas door is easily spotted, you’d be hard-pressed to catch the shaved antenna. “The stock antenna always bothered me. It disrupted the lines of the truck, so we shaved it for a cleaner look,” says Wallace.

Speaking of clean, the interior is just as tidy thanks to extreme care and more tasteful mods. “The stock interiors of the second-generation Lightnings are already nice from the factory with the suede seats, so instead of reinventing it we added small touches,” Wallace says. Beyond some matching black mats, a pair of Auto Meter NV AFR and boost gauges sits in an A-pillar gauge pod, while an Aeroforce Interceptor gauge resides in a column pod.

“After the lowering springs, we decided that in order to get the desired stance and still be able to tow, a quality air-ride system was the next step,” Wallace says. So after thorough research, they decided on a complete air-ride system with the digital air-suspension processor and the 5-gallon control system. He says, “After we installed the complete kit, we then C-notched the rear portions of the frame and modified the front shock mounts so that the truck could tuck the tires when it was aired down and still tow a Mustang on an open trailer to the track.”

As tends to happen with modifications, each one leads to the next. In this case, the newfound stance beckoned for aftermarket wheels. But rather than go for the expected, the Wallaces stepped up to custom True Forged wheels in 20x10 front and 20x11.5 rear variants. The wheels feature powdercoated barrels and centers with stainless steel bolts, including custom SVT center caps and black lugs.

With the flawless White Lightning tucking midnight 20s you might think that the Wallaces would hesitate to drive such a pristine example of a truck, but you’d be wrong. “My wife Olivia daily-drove the truck to work, and it was regularly used to tow race cars. In fact, we added an AMP-Research BedXtender, a BedRug carpet kit, and an upgraded tow hitch to make it even more useful,” says Wallace.

That’s right, Olivia drove the flawless pickup daily for several years until life necessitated a change. Say what? Yep, a regular cab truck is great for a couple, but not for a family. When the Wallaces were expecting their first child, the Lightning just wasn’t going to cut it. He says, “We kept the Lightning for the first few months, but putting a child seat in the pristine interior and hauling all of the other necessary baby stuff was just too difficult, so unfortunately we just sold it.”

Thankfully they found the right buyer, Steve Wilfley, who is another Ford aficionado equally meticulous about the Lightning’s upkeep. And while they already miss their one-of-a-kind Lightning, they can smile because their last memories with the truck were also the best.