Super Rare! One of 3 Shelby Driving School G.T. 350s Back on the Track 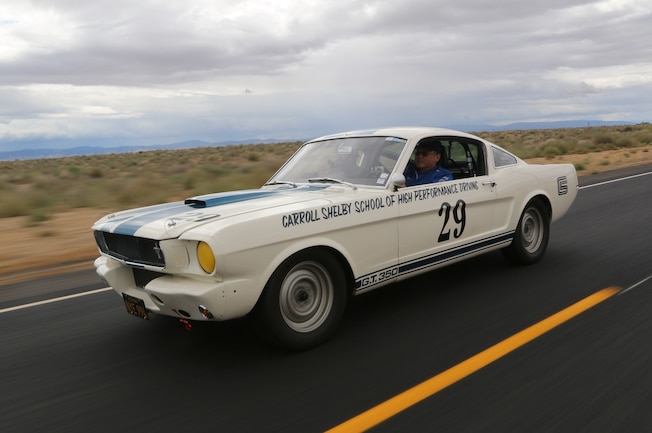 Carroll Shelby was one smart cookie. He knew selling high-performance cars to low-performance drivers was likely not a good idea. What to do with all the folks who wanted to learn to drive a racecar?

To solve the problem, he opened the first, American school for road racing in 1962. And even crazier, he did it at one of this country’s toughest racetracks, Riverside International Raceway in Southern California. The track was famous for producing some of world’s best race drivers. Shelby himself, for one, Dan Gurney, Richie Ginthe, Ronnie Buckman, Pete Revson, Ken Miles, John Morton, Parnelli Jones. The list is endless. If you wanted to learn to drive a high-performance car, Riverside was the perfect place. Assuming you survived the experience. Riverside had a nasty reputation for eating cars and drivers. It was super fast with several extremely tricky corners and did not tolerate mistakes well. It was not a track to be taken lightly.

It was Bruce Kawaguchi’s goal to finish restoring SFM5029 in time to attend the Monterey Historics 50th celebration of Shelby cars. Attention to detail, like this, makes the car an award winner.
Several R-model mods to SFM5029 included the racing hood and front valance, which at the time, was still undergoing development at Shelby American.

To start The Carroll Shelby School of High Performance Driving Shelby needed two things: great instructors and damn good equipment. John Timanus and Peter Brock (yes, that Peter Brock) were the school’s first two instructors, under the direction of Brock. Bob Bondurant briefly joined the ranks before leaving to start his own school a few years later. The school’s first cars were a humble but rapid Bugeye Sprite owned, at the time, by Timanus, and a BMC Formula Junior. Before long, a Cobra showed up. Famed Shelby American factory driver Ken Miles used the school’s Riverside location to test Cobras and give the already highly skilled Brock even more driving tips to share with his students.

In 1965, the school became the proud owner of three Shelby G.T. 350 Mustangs, cars that became the training beds for many a famous movie star (Paul Newman and Robert Wagner among them) and budding race drivers, too. The G.T. 350s proved to be solid and reliable tools for instruction. Slowly, in varying degrees, each received some of the racing “R-model” hardware. An earlier Shelby G.T. 350 is a car you have to drive, no video game racer here. With a Detroit Locker rearend, the car had abundant oversteer on throttle and plenty of understeer off throttle. Hard work to drive fast, the G.T. 350 is responsive to driver inputs, but it requires lots of driver inputs and a precise throttle foot to really go quickly. It’s fun once mastered, off-putting as hell in the beginning.

As life in the factories of Shelby American became increasingly busier, product testing moved to Willow Springs International Raceway north of Los Angeles. Again, an extremely demanding track and a good proving ground for chassis and suspension development. As a plus, Ken Miles could land his airplane on the track. The Carroll Shelby School of High Performance Driving had a new home. Due to its mountainside layout it was much easier to observe students’ driving.

The engine bay as it would have appeared in 1965.
One of the several Shelby R-model mods added to SFM5029 was the 32-gallon racing fuel tank. This allowed to the instructors to use the car all day for instruction on one fill up.
An Earl’s oil cooler is mandatory for a car being subjected to the beatings of students on a high-speed road course.

Before long, the school was voted one of the best racing schools in the world and the best in all of North America. Providing the best instructors, each accomplished racers, the best curriculum, and the best training vehicles certainly helped. Brock and team perfected the Chalk Talk, which was given at each corner of the track, giving students a relatable insight as to how to deal with every given corner.

By the end of 1967, the school’s instructors were so busy with duties at Shelby American the school was deemed a distraction and closed down. A year later, following a huge crash in a Can Am car at Watkins Glen, Bob Bondurant decided to open his own school and has never looked back.

The Shelby school’s semi-race prepped G.T. 350s slipped into private hands and out of the limelight, but in 1974, a popular Los Angeles-based dentist and competitive vintage racer named Bruce Kawaguchi bought school car SFM5029. Kawaguchi was pretty busy, with not only his dental practice but with racing another vintage G.T. 350. He even gave a Formula Ford a try. Kawaguchi was, and continues to be, a very active member of the Los Angeles-based Shelby American Automobile Club. Not only running at all the LASAAC open track events, but as an instructor for new members at open track day events.

It took time for Kawaguchi raises the funds, time, and expertise to restore SFM5029, but the wait was worth the effort. Kawaguchi focused on the details, not on winning Pebble Beach. The car is nicely detailed, restored to correct specs, and fitted with a strong but period-correct race engine. Kawaguchi still vintage races and track days are his pride-n-joy. The Shelby School of High Performance Driving car is still teaching rookies how to drive, albeit while trying to catch its taillights. Kawaguchi is a damn good shoe, he knows how to handle a Shelby, and he doesn’t mind running at the limit, though I suspect with respectful knowledge of the car’s value. He also enjoys cruising the streets of Santa Monica and Brentwood and had the SFM5029 registered for the street—a pretty wicked ride for a Sunday cruise.

Mustang Monthly convinced Kawaguchi to bring SFM5029 to Willow Springs International Raceway about 100 miles north of Los Angeles for a track day and photo shoot. Willow Springs is a familiar home to both Bruce and SFM5029. They’ve both had many laps on Willow’s high-speed 2.5-mile road course. Despite on-again-off-again rain showers, Kawaguchi pulled the car out of its trailer and set about following our camera car for photos. This was made even cooler when you know that two weeks before he had the car on the Santa Monica pier for a charity car show. All in all, a very happy ending for a workhorse that was never late for class.