The combination of a built motor and twin turbochargers is a potent one, so Travis Crutcher knew what he had to do when he envisioned a 1,000hp street car. 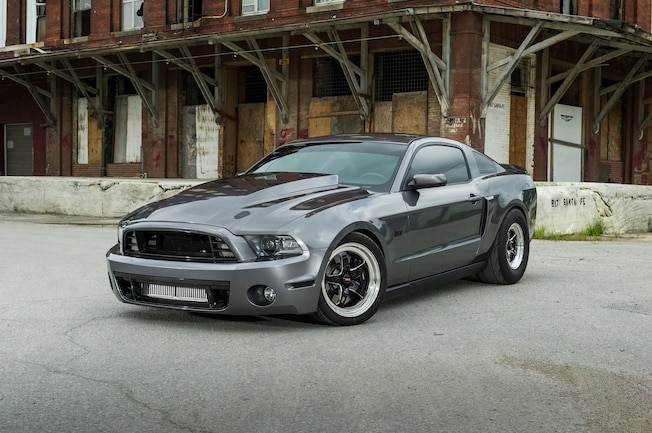 Here are Muscle Mustangs & Fast Fords you might say that stunning, well-built, powerful Fords are kind of our thing. We have the pleasure of checking out, tearing down, and building up some truly badass Fords on a regular basis. Some of us have even planned and carried out a personal build or two, not unlike Travis Crutcher of Grain Valley, Missouri.

That’s a pretty impressive fleet, but like many of us, Travis started small and grew from there. Which brings us to the here and now: this 2010 Ford Mustang GT that Travis bought in September 2012 after finding it on Craigslist.

Travis says, “Luckily it was only 20 minutes from my home. I knew I had to have it!” He hadn’t even been looking at the time, but the two-year old GT had a mere 7,000 miles on the dial, and it had already been ‘pushed aside’ by more than one shop. “I knew I could finish the car and make it magazine worthy.”

So the goal was set. Travis would build the car in an effort to run in the mid 9-second range still equipped with a six-speed transmission, with a plan to swap to automatic afterward to achieve low 9s to high 8s in the quarter-mile. Participation at mile and half-mile invitational events was also a major goal for the build. The final vision, a 1,000hp street car retaining all of its factory options.

“After a couple of frustrating weeks of trying to work on the car myself, I knew I needed to call for some help,” says Travis. That’s when he got in touch with Bob Engel of MTR Performance in Stilwell, Kansas, for help making his vision a reality. Over the next two years, Travis worked closely with Engel and Chris Watkins of CNA Performance in Kansas City, Kansas, to complete the Mustang’s transformation.

The Mustang’s modification list is lengthy and is all based around a 5.4L Four-Valve engine (330 ci) with an 8.5:1 compression ratio built by Modular Motorsports Racing of Camarillo, California. Inside, a forged crankshaft works with Manley pistons via Manley H-beam connecting rods. Travis decided on Ford GT Supercar heads with modified Supercar valve covers and GT Supercar camshafts. The bottom end is sealed off with a Moroso oil pan housing an MMR Hurricane billet geared oil pump. A custom sheetmetal intake manifold sits atop the engine, which is of course supplemented by impressive twin Precision 62mm turbochargers producing peak power at 26 psi. Twin 46mm Precision wastegates and TiAL 50mm blow-off valves were chosen, as was an air-to-air intercooler. Custom headers carry exhaust through an X-pipe and MagnaFlow mufflers. Engel was responsible for tuning the combination utilizing SCT software.

The hungry powerplant needs plenty of nourishment, and Aeromotive handles the job with an Eliminator pump, a Pro Series regulator, and a fuel controller, providing plenty to the ID 1300 injectors via Fragola Real Street fuel lines.

Travis bangs gears via Tremec T56 Magnum XL, which is paired with a McLeod RXT twin-disc clutch, a McLeod flywheel, and a Steeda Tri-Ax shifter. An aluminum driveshaft from Dynotech is held in place by a safety loop from BMR, including BMR tubular A-arms and K-member up front.

Speaking of suspension, GT500 struts reside up front with Eibach springs and a BMR sway bar. Out back sits an 8.8 rear with 4.10 gears and 31-spline axles, as well as BMR upper and lower rear control arms and Viking adjustable shocks. The stock sway bar remains in the rear with relocation brackets. Brembo brakes in front (with stock ones in the rear) bring the Weld RT-S wheels to a screeching halt.

The Sterling Grey beauty has been outfitted with a 2014 GT500 front end, a True Fiber hood, and a Seibon Carbon Fiber GT500 spoiler and ground effects. Tanner’s Customs in Kansas City, Missouri, is responsible for the appearance modification. Inside, the only addition you’ll find is an E-Boost 2 gauge in the air conditioning vent. That’s right—Travis still keeps toasty in the factory black leather heated seats.

Though a quarter-mile time has yet to be determined, Travis reached his main goal: The Mustang produces a tire-shredding 1,013 hp and 941 lb-ft of torque. “With the 20-inch wheels, she rides and drives smooth like a factory car,” he says, “but with the Weld wheels, she feels like a mild-mannered four-digit horsepower car.”

Travis was quick to thank his wife for her unwavering support throughout the build, as well as his family, Bob Engel, Chris Watkins, Bobby Oberlander of Obie’s Pro Detail, and Precision Turbo and Engine. He says, “My love for the Mustang will never change. Ford never seems to disappoint me as they continue to evolve the Mustang, and I can’t imagine they ever will.” 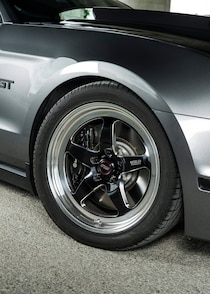