Little Deuce Coupe: The deuce, in this case, is a pair of turbos that get this Coyote-powered hardtop near the four-digit power range 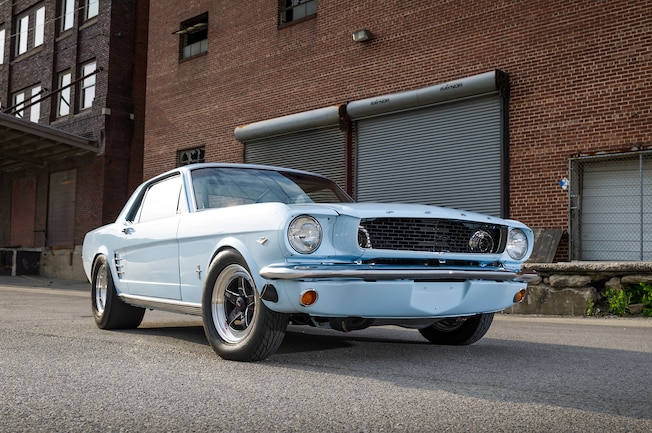 While working as a builder at the Restomod Store in Independence, Missouri, it seems Chris McLin had something of a Mopar predilection. This was before he decided to apply his talent to the Ford side of things by way of this subdued little Mustang hardtop that appeals to us in all the most important ways. Those cars included two Plymouths in the forms of a 1976 Duster and 1969 Road Runner, as well as a 1971 Dodge Challenger. Also in there was a 1964 Chrysler 300 convertible that he restored for his grandfather. “Instead of paying me, he traded me this Mustang,” Chris told us.

The story goes back further; much further in fact to nearly 40 years, when the Arcadian Blue hardtop was picked up by the said grandparent. Chris elaborated: “My grandpa bought the car in 1977 for my grandma to drive. She drove it for several years and my father even took his driving test in it when he was 16. After my grandma quit driving it, it sat for several years.” Chris then got the car in trade from his grandfather.

After Chris did the trade, the rust-free hardtop sat for another six years and Chris reports keeping pretty much the whole original interior and repainting the body the original color. But other than the interior, well, there isn’t much left original besides the factory seats, carpet, and doorpanels after the one-year transformation you see here.

Chris went with Ford Racing’s low-compression (9.5:1) Aluminator forged-internal-equipped Coyote crate engine that uses such pieces as Mahle pistons, Manley H-beam rods, and Boss 302 valvesprings. Some fuel system pieces include Aeromotive fuel rails, Injector Dynamics 1,000cc E85 injectors, and E85-compatible fuel lines. The other main players here are a pair of Turbonetics turbos mounted just behind the core support. Not visible but certainly worthy of mention are custom-built 1¾-inch stainless steel headers fabricated by Chris and TIG-welded by Restomod Store colleague Tanner Pap. On E85 it puts 800 hp to the wheels through a GM TH400 built by Mafia Performance Transmissions in Lees Summit, Missouri. It has a PTC reverse manual valvebody and a Circle D, 10¼-inch billet torque converter with a 4,000-rpm stall speed. With an E85 tune done by Justune, Chris is pretty confident he can reach the 1,000-rwhp mark with more drivetrain tuning.

Underneath this pedestrian pale-blue hardtop bodyshell lurks the machinations of a street/strip twin-turbo rocket ship that uses the latest 21st century equipment that Ford and the aftermarket have designed and produced. These include a 5.0L Coyote crate engine, a pair of Turbonetics turbos, and the ability to run on high-octane E85 fuel. The modern engine was partnered with a vintage transmission, a (cough) GM TH400 (cough) to handle the Space Shuttle-like power output. A pair of sticky Mickey Thompson E/T Drags in a 28x10.5W-15 size put that power to the pavement—well, they try anyway. With 800 hp at the wheels and only 3,000 pounds of vehicle weight to put it down, traction is always a struggle.

Exhaust systems on turbo cars have evolved in recent years to be quite fundamental in terms of routing—or lack thereof. On this car, the outlet sides of the turbocharger housings are simply routed to the nearest location on the outside of the car, which in this case is right underneath the front bumper. Simple, but effective, and while the car is loud, it’s not horrible, as the turbochargers themselves act as mufflers. The front wheels are 15x4.5 Welds with Hoosier 26x6-15 tires.
Do we love the minimalist interior? Yes, we do. It’s mostly stock except for a Grant steering wheel, a Hurst shifter, Dakota Digital VHX gauges, and a rollcage.
This car was never meant to be a cross-country cruiser, so luggage space is not a concern. With the widened wheelwells and rollcage, there’s just enough room for the battery, fuel tank, and intercooler water tank.

Besides how Chris has transformed the car into what it is now, one of our favorite things about the build is its sort of heirloom background. It’s something that has been in the family for nearly 40 years, was owned and driven by his grandparents, and is now honoring them as a third-generation family treasure that will continue to do so for as long as Chris owns the car. We suspect, and certainly hope, that this will be the case for at least another four decades under the loving tutelage of grandson Chris.

Everything on this unsuspecting sleeper coupe is just so right. The stance, the Weld wheels, the off-the-beaten-path Arcadian Blue color, the cleaned-up rear valence panel with the gas cap removed, and the otherwise mostly stock body—besides the radiused rear wheelwells to allow fitment of the 15x10 Weld wheels and 28x10.5 Mickey Thompsons. Other pieces include Wilwood disc brakes (all around), QA1 coilovers, a Heidts four-link locating a 9-inch with a Strange centersection, Richmond 3.25:1 gears, and 31-spline axles.