Fresh Prince of Belair: Scott Belair grew up in a devout Chevrolet family; imagine the reaction when he bought this six-cylinder Mustang convertible 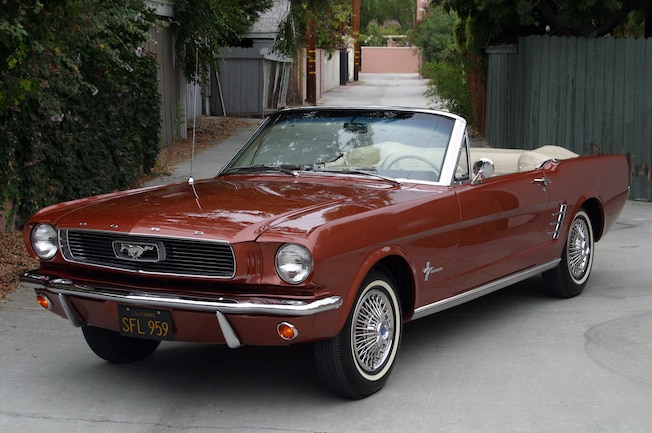 Scott Belair grew up in San Diego some 80 miles south of the “Happiest Place on Earth,” which has been home to Disneyland since 1955. Because Scott grew up in a car culture family, he loved automobiles. So did his father who used to drag race classic Corvettes and slingshot dragsters, so he grew up in a golden era of raw performance and real heads-up drag racing. So you can imagine what happened when Scott, after looking at several broken-down Chevys, arrived home with a used 1966 Mustang convertible in 1975. “I was 17 at the time,” Scott comments, “and I purchased my first car, this beautiful Mustang convertible, for $900. This was the beginning of my infatuation with the most beautiful car ever built.” Imagine the Chevy guy born and raised who fell hard for America’s original ponycar.

Scott’s Emberglo 1966 six-cylinder convertible is something of an irony because it was bucked and assembled at Ford’s Dearborn, Michigan, assembly plant and shipped across the continent to San Jose, California, where Ford was also building Mustangs in suburban Milpitas. When we investigate why Ford would build a California-destination vehicle in Dearborn and ship it two-thirds of a continent to a sales district where it was also building Mustangs the answer became clear. When we consulted with the In Search of Mustangs website we learned why this Mustang had a Michigan birthplace. Scott’s date code is “10V” or 10 August 1966. By the time Scott’s Mustang was scheduled for assembly in mid August, both San Jose and Metuchen, New Jersey, assembly plants had balanced out and were changing over to the 1967 model year. That happened in late July—Dearborn didn’t wrap up 1966 Mustang production until mid August.

Before you is a 20-year-old restoration performed by Scott Belair in the mid ’90s. The reason it has lasted so well is Scott’s respect for his craftsmanship. The car is rarely driven and kept under wraps.
When Scott restored his Mustang two decades ago, his goal was to keep the car showroom new. He remains true to that goal driving the Mustang sparingly.

Scott’s Mustang was assembled with a three on the floor and the California-mandated Thermactor air pump system designed to reduce exhaust hydrocarbon emissions. It was a beauty in rich Emberglo with a standard Parchment interior. In those days, it had Cragar SS mags and air shocks. “The car was in perfect condition,” Scott tells Mustang Monthly. “I did as many kids did back then. I installed a stereo system and cut speaker holes in the doors. I spent many hours cruising the beaches of San Diego, top down, watching the sun set over the Pacific.

“I drove the car daily to and from high school and college,” Scott reflects, “I logged more than 100,000 miles and yet it remained a very reliable car.” While he was away at college in 1983, the unthinkable happened. His Mustang was stolen. He was pretty positive he’d never see the car again, but as fate and luck would have it, the car was discovered 100 miles away with only minor damage. “This car would be an ice breaker for my relationship with my wife, Diane. We both drove Mustangs when we met. She had a red 1969 hardtop. I had my Emberglo 1966.” Scott laughs, “Even to this day she drives only red Mustangs. Her current ride is a loaded 2006 red Mustang GT with all of the factory options.”

Ford’s venerable Falcon inline-six displaced 200 ci for 1966. What makes this package unusual is its Dearborn, Michigan, birthplace with the Thermactor emissions smog pump and a San Jose delivery destination. Even the 200ci six was cast at the Dearborn Rouge complex and built in the Dearborn Engine Plant.
You will find Thermactor was a California vehicle only accessory prior to 1967. This view exposes the Thermactor air pump emission system in great detail. The engine-driven air pump induces low pressure air to the exhaust ports, which helps consume unburned hydrocarbons for reduced smog. Most of these systems were removed and thrown away early on when it was perceived they hurt performance. In truth the Thermactor system never adversely affected performance.

Upon graduation from college, Scott parked his convertible and made plans for a ground-up restoration. He wanted the car pristine, like new. He joined a local Mustang club where he encountered pretty knowledgeable people, and started with a Mustang Club of America concours judging score packet from a buddy and used it as a guide for correct colors and finishes. “I quickly learned that despite my efforts at achieving a concours perfect restoration, especially at People’s Choice car shows, that I was at a disadvantage on the show circuit. I had a six-cylinder,” Scott laments. “To be competitive with V-8s and GTs I had to get everything extremely correct, above and beyond a typical restoration. I had my work cut out for me.”

Scott stripped his convertible down to the bare shell and went to work in earnest, opting for the best parts from California Pony Cars, Virginia Classic Mustang, and others. Chrome parts were re-chromed for best results. He sourced U.S. Royal 6.95x14 tires with the correct 13/16-inch whitewall from Lucas Automotive. “Fortunately, I saved the original Thermactor smog pump system, pulleys, and hoses,” Scott tells us, “The unibody was stripped down, caulked, and primed. It was then carefully driven to the body shop for paint without fenders, decklid, hood, bumpers, lights, and other items.” Scott laughs when he relates a police officer sighting where the cop looked and shook his head in disbelief while Scott was en route to the body shop.

It is a simple ponycar logic with a pair of bucket seats, three on the floor, and cool five-dial instrumentation. The standard Parchment interior was restored by Frazier Auto Upholstery with fresh vinyl from Virginia Classic Mustang.

That’s glistening Glasurit urethane in rich Emberglo. When Scott got his 1966 back from Elite Auto Body in Fullerton, California, he had little time to wrap up the car in time for Knott’s Fabulous Fords in April of 1996. He finished at 2 a.m. on April 18, 1996—with no sleep—just in time for Knott’s a few hours later. That’s right; this is a 19 year-old restoration, as impeccable as it was for the rollout nearly two decades ago.

There is something wonderful in the simplicity of a Mustang floor shift without a console.
The three-finger quarter scoop ornament was tried on some of the styling prototypes at Ford Design during the Mustang’s development early in the ’60s. It finally made it for 1966 on standard Mustang models without the accent stripe.

Driving Scott’s Mustang convertible is a time capsule taking us back to high school in the ’70s. Slip the three-speed stick into First and ease out on the clutch—old-school driving at its best, with a hint of clutch chatter and the sound of the pressure plate and disc. Accelerating with an inline-six and a manual box yields the sounds of youth from long ago. Shifting into Second with the top down delivers wind through your hair and all the sights and sounds of civilization. Look overhead and watch trees and light poles pass by. The sound of a lawnmower. Chatter of old folks on a street corner. And these days, the pounding of one of those stinking subwoofer thunder rides. That’s right, it isn’t 1966 anymore, but Scott’s Mustang offers the sound and feel of the era. We will take it any way we can get it.

“Though this is not a concours restoration, it’s as close as you can get without the use of new-old-stock parts,” Scott tells us. “I am proud of the work I’ve done on this car. I’ve spent 700 hours on this project. It takes an extraordinary wife to put up with a husband who has spent so much time in the garage.” Scott adds he and Diane have a 1998 Mustang GT, an SVT Cobra, and the red 2006 Mustang GT. “We recently gave our nephew a 1989 Mustang GT convertible, hopefully planting a seed for the next generation of Mustang enthusiasts,” Scott comments.

Few rides are more inviting than a Mustang classic with the top down.