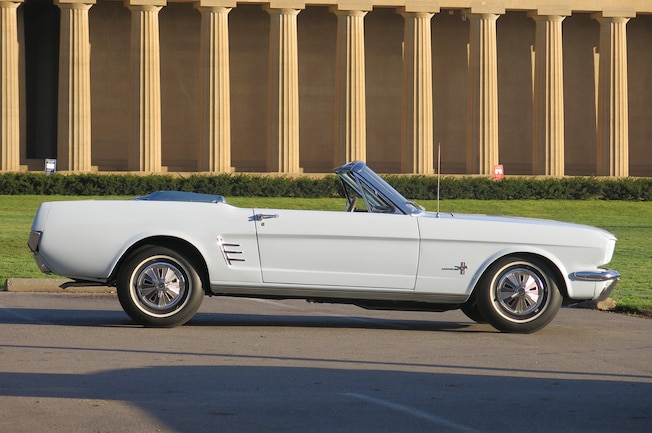 As the National Director of the Mustang Six Association, you would expect Terry Reinhart to have a nice six-cylinder–powered Mustang, and that he does. This is Terry’s third Mustang build and it’s his nicest by a long shot, making it a perfect representation of his obsession.

He found the car on eBay and became its owner after a slight bidding war, then began researching the car’s history. Mustang #168168 started life the same way hundreds of thousands of other Mustangs did in 1966, at the Dearborn Assembly Plant (DAP) in Dearborn Michigan. The car was built on Monday, January 17, 1966, and there was nothing really special about this particular Mustang. It was a six-cylinder convertible with a three-speed automatic transmission, Arcadian blue paint, standard blue interior, and a white top. Once it was built it was sent to a Ford dealer somewhere in Memphis Tennessee, and from that point until Terry got the car it gets a little fuzzy. At some point, the car was hidden in a shed and forgotten about for years. Eventually, the roof collapsed on the shed, exposing the car to the elements and causing the bulk of its deterioration. The car ended up in the possession of a guy who wanted to convert it to a V-8 car, but gave up the idea and decided to put it on eBay.

Mustang #168168 was built on January 17, 1966, and was painted Arcadian Blue with a white top.
A perfectly restored 1966 convertible just makes you want to take a long Sunday drive to nowhere in particular, doesn’t it?

As we already mentioned, Mustang #168168 was Terry’s third Mustang build; the first was a 1965 hardtop that became known as “Frankenstang” for the mix-and-match gang of parts it took to restore it. This first car was sold so that Terry could buy a wedding ring for his future wife, Ellen, and then he built a 1966 hardtop with a six-cylinder and Emberglo paint, restored it to factory condition. But that was also to finance his real love, a first-gen convertible. Enter #168168.

Once he got the car home after the eBay purchase, Terry realized he had his work cut out for himself, saying, “The convertible was in horrible structural shape; just about every part of the unibody was severely rusted, dented, or in some way damaged. Most people in their right mind would have considered the car too far gone to restore, but I could envision what it could be when I looked at what remained of it. This Mustang was to be my “keeper,” the one that I will hold onto for many, many years.” The one bright spot about the car was that it was complete and still had all its original parts.

The build was not about to happen in the home garage though. “One of the conditions my wife had set for agreeing to let me buy and restore the convertible was I was not to restore it in our attached garage,” Terry said. “She’d had her fill of paint fumes coming into the house, and me tracking dirt and body filler all through the house from my shoes and clothes. I think the straw that broke the camel’s back was when her washer and dryer became tinted Ford corporate blue.” Terry’s solution to the garage situation? While the convertible sat under a tarp in the driveway, he built a 20x30 shop behind the house!

Previous experience convinced Terry to start the build by completely stripping all of the car’s parts, then blasting the entire shell with 1,000 pounds of blasting media to see what he was working with. About 70 percent of the sheetmetal was junk, so a huge order from NPD soon filled the garage with sheetmetal. Terry said, “My wife said I couldn’t restore another car in the attached garage, but there was no mention that it couldn’t be used for storage. In time both the attached garage and a spare bedroom became a storage area for new car parts.”

The car originally came with a standard blue interior package, but Terry wanted to restore the car to the way he would have ordered it back in the day. One of those options was the deluxe blue and white Pony interior that includes a simulated woodgrain steering wheel, woodgrain instrument bezel and glovebox door, two-tone seat covers with embossed ponies, sculpted door panels with pistol grip door handles and courtesy lights, deluxe seatbelts, a seatbelt warning light, and carpeted kick panels.
Terry also added Rally-Pac gauges, air conditioning, and an AM radio.
The engine was a generic rebuild, but it had the right date codes, and Terry swapped the original exterior bits from his car onto this engine. Big-block owners are insanely jealous about that spark plug access!

Terry built a rollable body jig and began the job of fixing rust and other damage and bolting on the replacement sheetmetal began, but it wasn’t easy—he replaced so much structural and exterior metal that it’s nearly a new car. The worst of it was the rear section of the car, as Terry said, “The only original parts from the center transition back were the trunklid and the parts of the inner and outer wheelwells.” He also fought with the fitment of the reproduction sheetmetal parts, and still isn’t totally happy with the door gaps he ended up with.

After struggling mightily for weeks with bodywork to get everything straight, a friend who was the body shop manager for the local Ford dealer took mercy on Terry and made him a very reasonable offer to finish the body prep and paint. It seemed that one of his employee’s wives had brain cancer and it created a great financial burden on the family, so the guys at the body shop all pitched in to finish Terry’s car, vendors donated the needed supplies, and the total cost of whole deal could be given to the employee. “Sadly though,” Terry said, “about a year after my car was finished she succumbed to her cancer.”

While work was going on at the body shop, Terry began collecting the parts to return the car to as-built status, but to also add the options he would have chosen had he ordered the car new, such as air conditioning, an AM radio, power top, Rally-Pac gauges, 55-amp battery, and “knock off” wheel covers. He also ordered a deluxe blue and white Pony interior. The goal was a 100 percent concours restoration so he used N.O.S. parts anywhere he could, even though they were often two to three times more expensive than reproductions. The original engine was junk, so he found a generic-rebuilt 200ci inline-six with the correct date code and added the correct exterior parts to it. He sent the C4 trans to get rebuilt and then did the 7-1/4-inch differential himself, the hardest part of which was determining how it was painted. “Six-cylinder concours restored Mustangs are not very common,” he explained. Terry made sure that the body shop painted the car just as Ford did originally; meaning with the trunklid and doors attached and with the correct amount of orange peel.

During final assembly Terry realized he needed to give the car a name, and since it was considered “the other woman” by his friends and family, he named the car Elizabeth-Marie, a combination of his wife and daughter’s middle names. In August 2013, Elizabeth-Marie was entered in its first show and she took first in class and then nine more First Places the rest of the year, but the pinnacle was probably the Gold award at the MCA show in Springfield, Illinois, and Junior First Prize in the AACA Fall Nationals held in Lebanon, Tennessee.

Though Terry restored the car to concours condition, it’s not a trailer queen unless the trip is longer than two hours from home, and that’s more to prevent wear and tear on Terry than it is to the car. He summed it up by saying, “As Bill Ford said at the 50th anniversary at Charlotte last year, “they were made to be driven.” I also think they were restored to be driven! I get a great sense of satisfaction knowing I restored this car myself and I know where every nut, bolt, and bit of seam sealer is on the car. But the greatest sense of accomplishment I feel is when someone looks at the car and tells me, ‘It looks just like it came off the showroom floor.’ That always brings a huge smile to my face, since that was my goal from the beginning.”

Terry wanted to make sure to thank his good friend Bruce Winczewski for the doing the great photo shoot of the car that you see here, saying, “If you live in the Nashville area and are interested in a photo shoot of your car, Bruce can be contacted at bsbr44@netzero.net.”