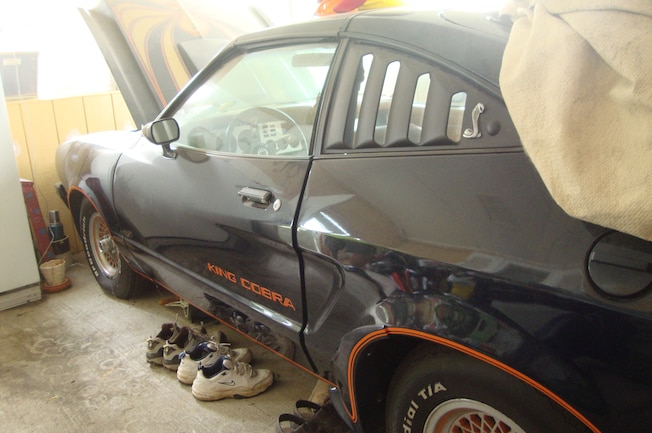 “You know my Dad’s got that low-mileage King Cobra and I think he’s going to sell it.”

“A King Cobra?” Rick Parker was more than a little stunned. He had known Johnny Davis for over 35 years and this was the first time Davis had ever mentioned this car. Parker owns Signature Auto Classics in Columbus, Ohio, and turned his hobby into a business, but he does more than restore customer cars. Parker also collects muscle Mustangs and Fords.

Davis is one of the many people who come by Rick’s shop to talk cars and that’s how the King Cobra came up. A King Cobra may not be big on muscle, but this 1978 model is hot looking with slats and spoilers and a big Cobra decal on the hood, so Rick was definitely interested in his friend’s father’s King Cobra. “I called Johnny up later [November of 2014) and he said to come on over to his house. He has a cool little shop there. We walked across the street to his father’s house.”

Everything under the hood appears stock and unchanged from new, including the smog parts. The stock engine for the 1978 King Cobra was a 302-2V V-8
The interior is Chamois Vinyl and did not need restoration.

When Rick stepped into the lean-to on the side of Bud Davis’ house, his eyes gazed on a 1978 King Cobra, covered in dust but otherwise intact upon first glance. The car was Dark Midnight Blue and appeared to be just a nice original. Rick opened the door to find Chamois vinyl seats and carpet that wasn’t even faded. Under the hood, the 302-2V V-8 looked factory with its little wire ties and brackets. Rick was very interested in this car due to its originality, since 1978 Mustang II parts are tough to track down, especially for a specialty model like a King Cobra with a production run of one year and 4,971 units.

“I have no problem paying a lot more for a better car because you start chasing console parts and interior trim and sun visors. Nobody makes them. It’s like buying lobster on Friday night. I’d rather pay more and buy the better car,” Rick says. This Cobra II was definitely a better car. Everything looked original. Bud Davis purchased the car in 1979 and had done a great job of driving and preservation, so Rick and Bud started to negotiate but they couldn’t come to a deal on the first visit. Months passed and in the summer of 2015 Parker went back to Johnny’s house and the two of them walked across the street to Bud’s. This time they made a deal and a rollback took the car to its new home, Rick’s shop.

Parker began servicing the King Cobra, replacing the flat-spotted tires, installing a new fuel pump and doing some basic maintenance things, and the 302 fired right up and ran well. The rest of the car cleaned up really well and needed nothing, and Rick put the car on display in his shop for about a month. He said, “All the people that came in here would say stuff like, ‘Oh, you’re kidding. A King Cobra? That’s a joke.’ But, before they would leave they would go, ‘Hey, if you ever decide to sell it, would you call me? I really want one of those.’” Even though people dogged on the car, Rick could have sold the King Cobra 10 times, but finally let it go to a customer/friend, a man he had in mind when he purchased the car.

No wrecks for this II. The King Cobra was very well maintained, and had just been sitting for a very long time.
The dusty Cobra looked pretty sharp, and would clean up fine.
The Mustang II was dusty but in good original condition. No, the tennis shoes did not go with the deal.