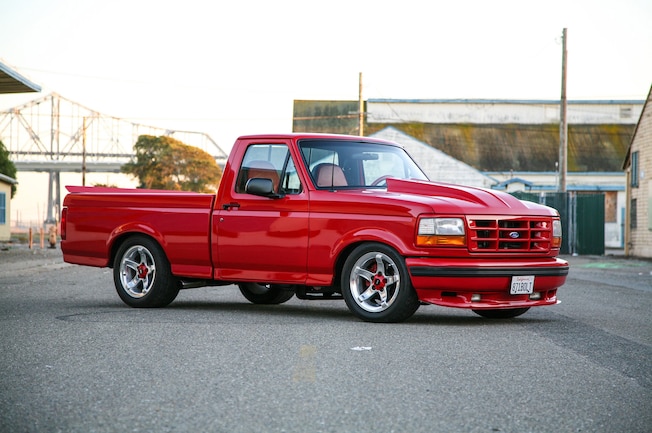 It’s no secret that owning and modifying a muscle car or truck takes serious dedication, but few recognize that the vehicle of choice dictates the amount of blood, sweat, and tears one sheds. Simply put, if you own a Mustang, you’ve got it easy. It’s the enthusiasts with the Crown Vics, Marauders, Fairmonts, and first-generation Lightnings who have it tough. This isn’t to say that owning a Mustang automatically paves the road to performance greatness with gold, but it means that as a Pony car owner, you’re blessed with tremendous aftermarket support.

In stark contrast, if you own one of the aforementioned vehicles, which were not embraced by the aftermarket, performance parts are nearly nonexistent. This means you’re either left running what’s available or turning to time-consuming and equally costly custom fabrication.

Alex Bernal says, “I’ve loved owning a first-generation Lightning because they’re pretty rare, but being rare also means that I’ve had to spend countless hours fabricating parts because the aftermarket support for the early trucks just isn’t as strong as it is for the Mustang.”

You see, if you want a supercharger for your Mustang, you’ve got nearly a dozen options. The same goes for headers, exhaust systems, hoods, roll pans, and, well, just about anything.

“When I wanted to supercharge the Lightning, there were only a few options on the market, so when I wanted something a little different, I had no choice but to have a custom setup fabricated,” Bernal says.

Before we delve into the details of this torque monster, let us acknowledge that Bernal was born into a Ford family and has bled blue since the day he was born.

Believe it or not, Bernal bought his Lightning not only because it was badass but because he needed a truck. Yep, this Lightning has made more runs to the dump and Home Depot than Bernal can count.

“I was working construction part time when I bought the Lightning back in 1999,” he tells us, “and since the day I got it, I’ve used it to haul all kinds of stuff. In fact, just last week I ran a load to the dump. You should have seen the look on the workers’ faces when I pulled up.”

But his Lightning wasn’t always this rowdy. It started stock but didn’t stay that way for long. More power came in the shape of a 418W stroker with a small roller cam, AFR 185 heads, and a supercharger setup. He noted that the small heads and cam were chosen for emissions reasons.

“I then jumped to a traditional 8-71 blower, which looked great, sounded insane, and pushed power to 470 hp and 570 lb-ft,” says Bernal. He might be cavalier about the combo now, but it didn’t achieve those numbers without a ton of good ol’ homegrown R&D.

“I decided to modify the GT40 lower intake manifold to accept a Velocity Turbo Systems air-to-water intercooler setup with a front mount heat-exchanger system designed for a Terminator Cobra to keep the intake-air temps down,” he says.

As if intercooling the big roots blower weren’t cool enough, Bernal also took the advice of the engineers at BDS and decided to spray fuel through the blower to keep the IATs in check.

He says, “I designed the upper intake plenum, which accepted an additional set of four 42-pound injectors along with an Accufab GT500 throttle-body that’s connected to a custom intake setup.”

Again, Bernal was beyond modest about the setup, but if you ask us, it’s pretty trick. The combo uses a Ford Racing AKCO computer and MAF, and the secondary injectors are wired to the third, second, fifth, and eighth cylinders so that they’re triggered every other firing event.

Speaking of fuel, Bernal decided to ditch the dual factory tanks for a rear-mounted single Bronco unit along with an Aeromotive 340 pump, regulator, and AN-8 and AN-6 stainless braided lines. Ignition duties were left to an MSD distributor, 6AL box, and coil, and Ford Racing plug wires.

Bernal was happy with the combo until a tuning error on the dyno cost him a motor. This laid the truck up for months. As they say, idle hands are the devil’s workshop.

“I fixed the 418ci, but during the downtime I decided to sell the entire combo and move up to a bigger, badder blower,” he says.

Although an even bigger blower was atop a smaller 351W motor this go around, the combo still made great power. But as you can guess, nothing is ever enough for Bernal. He built a 427W and recycled the AFR 185 heads and small cam from his original stroker.

“The smog-friendly AFR 185 heads and docile cam weren’t great for top-end power, but the combination of the 427 and the bigger blower made 500 hp and 584 lb-ft at the wheels,” says Bernal.

When another stroke of bad luck ruined some valvetrain components on the 427, Bernal seized the opportunity to add AFR 205 Renegade heads, a more aggressive Lunati cam, Scorpion roller rockers, and a custom-modified Edelbrock AirGap intake manifold with his previously designed intercooler inside. To complement all that additional incoming air, Bernal upgraded the exhaust system to bigger MAC 1 3/4 long tubes originally made for a Mustang, along with custom 3-inch true dual system with Flowmaster two-chamber mufflers. The latest inlet and outlet upgrades unlocked more power . . . and more problems.

“The first time on the dyno with the new setup, it ran out of fuel at 4,500 rpm, but it still made 561 hp and 666 lb-ft at the wheels,” he explains. That’s big torque, like the kind that can instantly turn tires into melting rubber and transmissions into smoking piles of rubble.

He says, “I had the E40D transmission built and hooked it to a B&M Magnum Grip floor shifter, which is pretty unique since most people don’t want to move the shifter from the stock column location to the floor.”

All that power feeds through early second-generation Lightning wheels wrapped in NT555 front and NT555R rear rubber. Hiding behind the wheels is a front brake setup from a 2005 Ford E-150 van, which utilizes dual-piston calipers and larger rotors.

“The brake upgrade made a huge difference in stopping power and is pretty cool since it is all OEM parts that literally bolted on,” he says.

“I tried to keep the aesthetics to a minimum and accentuate the stock lines, so I was choosy with what I added,” he says.

This included a custom cowl induction hood that’s integrated into the stock sheetmetal and a homebuilt splitter up front along with a custom aluminum tonneau cover with an integrated spoiler and roll pan out back. Although it’s as much go as it is show, a JDM suspension system with shocks, drop beams, rear hangers, and shackles keeps the stance lean and mean. In the end, Bernal has created a unique truck all its own, and from mostly custom parts too.

It has been a long road for Bernal, but his steadfast dedication has propelled his Lightning into a realm occupied by few. Is it the fastest or cleanest example on the planet? No. But you’ll never see another one like it, and the entire truck was built at home. If you ask us, that’s pretty dang cool.

Bernal would like to thank his brother for all the morale and monetary help, Gotelli Speed Shop, Meineke Muffler in Redwood City, Swanson Performance, and Dino Fry for the engine and head work. 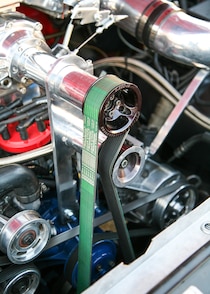 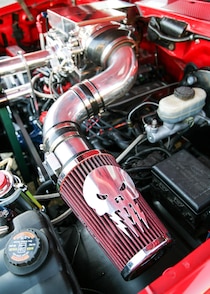 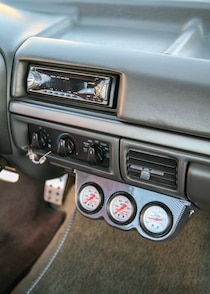