In one of his greatest on screen roles, the late James Garner drove this GT350H around Europe during the filming of Grand Prix, plus its great cameo in the film. 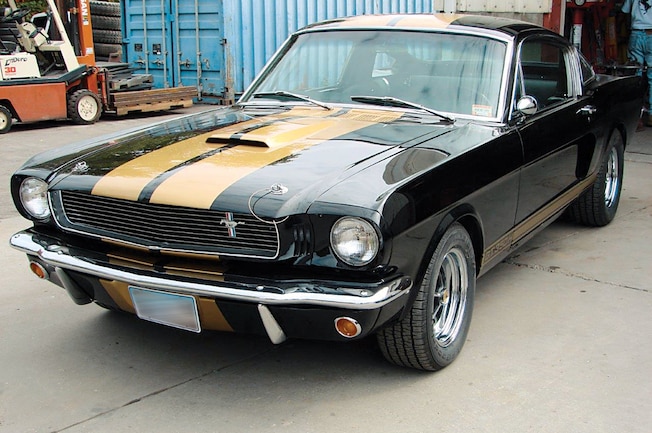 Matt Stone
July 2, 2015
Bondurant School photo: A smiling James Garner at the wheel of a Shelby GT350 school car with his longtime friend and personal driving coach Bob Bondurant in the passenger seat at Willow Springs, giving Garner's driving skills an on-track tune-up prior to the making of his Formula One racing epic, Grand Prix.

Over the last five decades, Mustangs have made thousands of appearances in movies and television. Among the most memorable are the Mustangs that appeared in Gone in 60 Seconds (the original and the remake) and of course in the iconic Steve McQueen chase scene epic, Bullitt. However prior to the filming of either, American acting favorite James Garner signed on to portray American Formula 1 driver Pete Aron in director John Frankenhiemer’s landmark film about F1, Grand Prix, filmed during the 1965 F1 racing season. Garner and Frankenhiemer both agreed that in order for Garner to appear credible in the role, he needed to look, act, and drive like a real grand prix racer. While Garner liked cars and had a certain natural talent, he needed to be trained for this aspect of the role. At the time, legendary Cobra pilot Bob Bondurant was already entertaining the notion of opening a professional racing school, and also having considerable F1 experience, was a natural to coach Garner literally and figuratively up to speed. Connections wise, it also didn’t hurt that Carroll Shelby signed onto the film as “Technical Consultant.”

Frankenhiemer wanted Bondurant to train all of the film’s actors cast as racing drivers, several of whom were European. The director’s casting also included several top level racers that would play themselves in the film, among them Phil Hill, Dan Gurney, Richie Ginther, Chris Amon, Graham Hill, Jo Bonner, and others. The latter group of course only needed acting coaches, not driving coaches. Even though Bondo had some responsibility for the other lead actors, Garner, playing the leading role, was to be his primary focus. So Bob decided to check these guys out to see what they were made of.

GT350Hs are often seen running a variety of wheels including the Shelby "ten spoke" design, Shelby/Crager mags, or these Magnum 500s, likely the most factory correct and thus popular look on a Hertz car. Kind of like the black with gold stripes treatment, the look remains period perfect.
The Grand Prix GT350H's engine bay was restored to as new, show quality, with the right original parts and NOS pieces as needed. Note proper repop battery at lower right of photo.

He recalls that “prior to production, or any driver training, Frankenhiemer asked me to take each of the four main actors out in a race car to see how they felt about the speed. So I did, in a Shelby Cobra 289 racecar. It was pretty easy to see who was going to be the star here, and who was the real racer among them. I don’t think Brian Bedford even had a driver’s license, so he was obviously on edge, as he’d never gone as fast in an automobile, and the notion of car control at high speed was totally new to him. Yves Montand seemed relatively comfortable; he was a middle-aged European with a fair amount of on road driving experience, and likely had driven some hot sports cars, pretty fast, at one time or another. Sabato was somewhere in the middle, not as petrified as Bedford was, but obviously Antonio hadn’t had much experience behind the wheel of an automobile, particularly a racecar at high speeds. But James Garner was a natural. While gunning around in the Cobra, I looked over at him and the faster we went the bigger he smiled. He was having fun, but he was also paying attention. He was watching my lines through the corners, shift and braking points, already learning how to race. He asked smart questions, and obviously couldn’t wait to get behind the wheel of a car and really start working.”

High performance driver training always begins in the classroom, likely in front of a chalkboard, with discussion of racing lines, apexes, how to enter and how to exit corners for maximum speed and minimum lap times; James Garner’s training with Bob Bondurant at Southern California’s Willow Springs Raceway, began no differently. There are videos of Garner and Bondurant gathered around a chalkboard talking their way around the fast yet technical Willow Springs road course. Then they’d go out together in a Shelby GT350 Mustang, first with Bondurant at the wheel, then switching places, learning the lines, shift, and braking points. Bondurant was pleased with his capable student. “Jim caught on fast” Bondurant recalls, “and he thinks like a racer. He paid attention and asked smart questions. After some time together in the same car, we separated and each drove our own car and played lead and follow” first with Bondurant in the lead car, and Garner behind and watching his lines and technique, then switching so the teacher could critique the student.

This isn't James Garner, nor is it Grand Prix co-star Jessica Walter; instead a handsome couple in a moody beachfront Hertz advertising and PR photo intended to give you an idea of what your life would look like if you rented a GT350H from Hertz.

Needless to say, Garner took to the role like a duck to water, clearly having The Right Stuff. Among Bondurant’s other responsibilities to the film was to drive the “camera car” in this case an early Ford GT40, specially modified and outfitted with innovatively mounted, robotically controlled Panavision cameras. So both Bondurant and Garner needed to follow the production around Europe to a variety of the F1 courses that became the film’s many and varied backdrops. It only made sense that these two hard-driving Americans would tootle around Europe in a high performance American car, and with Carroll Shelby on the film as a consultant, it was an easy bet that said car wasn’t going to be a Corvette. Thus, Shelby GT350H, chassis 6S611 was drafted as their company car for the duration of the production schedule in Europe, and also for a couple of cameo “drive on” scenes in which Garner, as F1 driver Aron, drives it through the pits and paddock. Bondurant notes that “the car drew a crowd everywhere Jim and I drove it. Every time we parked, there were more people around it than any Ferrari.”

You will recall that most GT350Hs were automatic transmission equipped for obvious rental car fleet reasons, but 6S661 was factory built with a 4-speed manual gearbox. It wears the iconic Hertz black with gold stripes paint scheme with an all-black interior, dash-mounted tach, and no console. The only other goodies notes in the Shelby American Automobile Club (SAAC) Registry were chromed Magnum 500 wheels, an AM radio, power brakes, prep, and freight charges…all in costing Hertz $3,899.70. It is therefore likely that the AC unit seen in these photos was added at a later date.

After its tour of duty for the making of Grand Prix, it appears the car was sold and remained in Europe for some time through a handful of owners. It ended up in Germany for a while, looking decidedly worse for wear—missing its bumpers, it had been fitted with a cheap-looking pair of slot mags, jack-up spring shackles in back, and a pretty janky looking exhaust system. That was before the car was rescued by an American car collector (who wishes to remain anonymous) from the Northeastern United States, and has since been fully restored and returned to its original spec and glory. The car is now a show-quality GT350H; looking for all the world as if the late James Garner just rolled it through the pits at a Formula One race.

Like all Shelby GT350s, the H model wore a hood scoop with the galloping horse badge mounted in the grille, slightly favoring the driver's side of the car; this look replaced the horse and corral pieces found on standard Mustangs.
Like most early GT350s, this car's cabin is mostly business. Factory installation of the A/C unit isn't mentioned in SAAC's decoded description of the car's build and equipment, was quite possibly added post build to keep Garner and Bondurant comfy during a long summer of driving around Europe during the filming of Grand Prix. Or it could have been added during the restoration, we’re not sure.
Even though the Grand Prix GT350H was built in 1965, it incorporated all of the 1966 GT350H updates, including the side scoop and triangular sail panel windows. The latter were a great design update, and also helped open up the Mustang fastback's blindspot visibility.
Post restoration the GT350H looks factory fresh and perfect once again; during its time living in Germany, it had lost its rear bumper, had its Magnum 500s replaced with some cheap slot mags, and had its butt hiked up in the air with a pair of rear spring shackles. Thankfully, the car was rescued by an American owner who had the brains and money to redo the car right.