A Santorini Blue 1969 Ford Mustang Convertible for the Ages 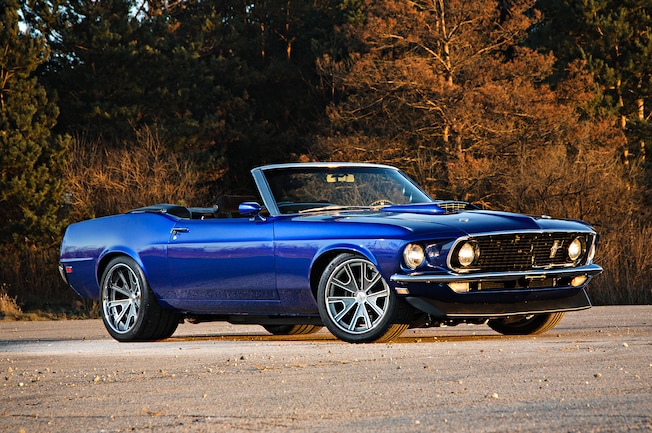 When it comes to 1965-1973 Mustangs, everyone has their favorite year. Many love the pure design of the 1965-1966s, while others are partial to 1967s and 1968s with their slightly larger look and true fastback roofline. A third faction will raise a strong hand for the 1969 and 1970 variations that with the right setup and stance totally exude a full-tilt road-race vibe and look like they’re going 100 mph standing still. Next, the 1971-1973 “big body” cars surely also have their fan base, with legendary models like the Boss 351 and 429 Cobra Jet versions part of the mix. Factor in the radical, almost flat fastback roofline and you clearly have a case for these cars being as cool as their slightly earlier predecessors. Finally, blend convertibles of any year mentioned above into the vintage Mustang stew and you have a multitude of choices for what is the world’s most popular collectible car.

Turner’s Mustang with the top up still looks hot.

While we love them all, we’ll admit to a pinch of bias on congratulating Bobby Turner in his selection of a 1969 model for his project, since we have owned at least one of each from 1965-1970 and it’s the 1969 we’ve hung on to through thick and thin for more than 12 years. If nothing else, the 1969s do have one truly unique aspect to them that, for many, endears them as a favorite among the others, and that’s the dramatic four-headlight front end that is such a distinctive attribute.

While Bobby has clearly chosen a fan favorite by going with a 1969, we’ll also give added credit for leaving the familiar fastback path and building a convertible instead—an unusual twist not often seen in the realm of fairly radical custom-built Mustang Pro Touring or restomod cars. 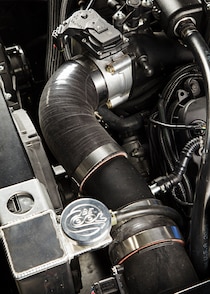 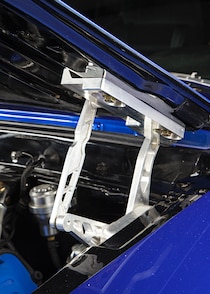 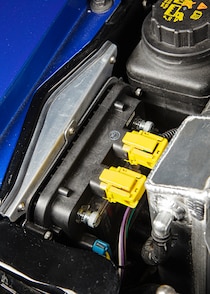 The Schwartz chassis (see sidebar) is primarily designed to accept the 5.0L Coyote engine as found in 2011-2014 Mustang GTs. This, of course, is the 32-valve V-8 that is the standard for modern-day Ford performance and produced 412 hp in the 2011-2012s and 420 in the 2013-2014 Mustangs. In the 2015 Mustang GT, the Coyote is rated at 435 hp. However, this is an Edelbrock crate version, which comes equipped with the big E’s, 2,300cc E-Force supercharger. With a Ford Racing crate engine as the foundation, the version Edelbrock uses has two deviations from a stock production line Coyote 5.0L. They include Boss 302 valvesprings and a compression ratio reduction to 9.5:1 from 11:1, which is specifically designed for supercharged applications. In a relatively light car like Bobby’s convertible, you can imagine the resulting 12 psi of boost, 700 hp, and 606 lb-ft of torque (courtesy of a Jesse Riggle custom tune) to be a lively ride to be sure. The rest of the drivetrain includes a T-56 Magnum six-speed and a Moser 9
The Wilwood brakes feature six-piston calipers in front and four-piston in the rear with 13-inch rotors all around. The Grip Equipped Grudge forged wheels are 18x9s up front and 19x13s out back, while the Michelin Pilot Super Sport tires are P275/35ZR19s in front and ginormous P345/30ZR19s out back.

Speaking of radical, we’d be remiss to wait much longer to bring up the motivation for Bobby’s 1969 droptop. It’s nothing less than a supercharged Coyote 5.0L, 32-valve engine first used in 2011 Mustangs. While we were somewhat open-ended on the discussion of best Mustang model years, we’re going to be a bit more emphatic in our opinion of the Coyote 5.0L being the best-ever Mustang engine. Of course K-code 289s, Boss 302s, 428 Cobra Jets, and Boss 429s were and still are legend; the simple fact is that none of these engines or any other of their pushrod variants—in stock form—can hold a candle to a modern Coyote 5.0L. Making 412, 420, and now 435 hp right off the showroom floor, the Coyote is, to our minds, the clear de facto benchmark for the Mustang’s top off-the-showroom-floor, mainstream naturally aspirated performer. And power is easily doubled by bolting on any of the available superchargers, making this engine a no-brainer when it comes to engine swaps.

So as we’ve stated at the top, Bobby’s fully custom-built 1969 convertible is a truly unique Pro Touring Mustang build with the body and engine being an ideal match. For all the further details surrounding the rest of the car’s goodies, including its Schwartz Performance full-frame chassis that bolts up to a Mustang’s existing body shell, be sure to give the following photo captions a thorough read.

FloFit cloth seats, Auto Meter gauges mounted in a JME Enterprises cluster, a Grant steering wheel, an ididit tilt column, Vintage Air climate control, and a Schwartz-fabbed custom console with power window switches mounted in it are the updates to the interior. The door panels and dash pad are pretty much the only remaining stock-style interior pieces. Shane Cassin did the interior work.

The Schwartz Performance G-machine chassis foundation is a full frame that installs directly underneath any 1965-1973 Mustang body shell. According to Jeff Schwartz, the primary brain trust behind the frame, “The sheetmetal of a Mustang body shell that the car’s drivetrain and suspension components are mounted to begin to flex when you add considerable amounts of power—like a 700hp supercharged Coyote—along with [the need for] higher spring rates and better brakes. With the G-machine chassis, the engine, transmission, rearend, suspension, and steering are isolated from the body. The chassis becomes the main support of the car and the unibody structure (or body shell) simply becomes added support and help to tie the G-machine chassis together.”

One of the more notable aspects of the Schwartz chassis is its relative bolt-on nature. That’s not to say it’s like installing a set of chrome valve covers on a 289, but installation is fairly straightforward. “The floorpans don’t have to be cut,” Jeff said. The only required cutting is of minor brackets, while the front framerails and front shock towers are also removed, resulting in a nicely cleaned-up engine compartment. The only welding is four mounting plates onto the toe board, and the only drilling is for two bolt holes in the rear framerails.

The base chassis includes a fully welded frame built on a precision jig and an adjustable transmission crossmember. Also included are all front and rear suspension components (excluding coilovers) such as control arms, ball joints, tie rods, and a power rack-and-pinion. Aluminum front wheel hubs with bearings and Teflon-lined heim joints provide quiet and bind-free suspension operation. Several options are available, including different brake setups from Wilwood and Baer, single- or triple-adjustable coilovers from RideTech, a Moser 9-inch housing, or a Heidts IRS and motor mounts for pushrod small-block or modular/Coyote engines.

Jeff also told us that most people usually have two main concerns with the Schwartz frame. “One is ground clearance,” he says. “They think it’s going to hang down, but we’ve actually been able to tuck everything up and under the car so that nothing is lower than stock. Secondly, they want to know if any weight is added. We actually take about 50-75 pounds off the car because we eliminate the heavy stock leaf springs, front upper and lower control arms, cast-iron steering box, and all the stock steering linkage.”

The base price for the chassis is $9,398 as of press time, but of course that goes up substantially depending on the options you choose. For more on all this trick stuff, check out www.schwartzperformance.com.