The LS7HNTR: With more than 1,000 rwhp thanks to high compression and twin turbos, this Cobra has no problem living up to its custom plate. 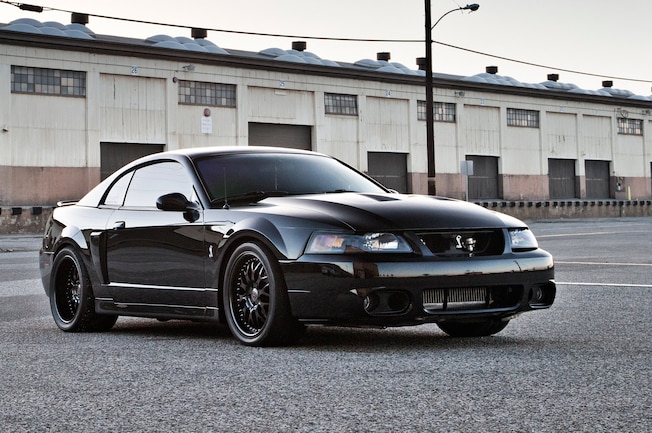 Like the drivers who own them, custom cars have personalities all their own. Some are clean, concise, and inviting, while others are dark, ominous, and intimidating. Without question, Fredrick Kyle’s murdered-out 2003 Mustang Cobra falls into the latter category. It doesn’t politely ask for respect; it grabs onlookers by the neck, roughs them up, and demands it.

The irresistible attraction starts with the midnight finish, so deep and so endless that it sucks onlookers into a state of hypnosis. It is magnetic, but don’t think for a second that it’s inviting. Stare long enough and you might turn to stone. Once they recover from the trancelike state that the flawless hue evokes, onlookers turn their gaze to other details in the hopes of deciphering just why this Cobra is as intimidating as it is intriguing. Maybe it’s the wicked wheels wrapped in wide rubber, or the pair of blow-off valve (BOVs) hiding just inside the grille. Honestly, it’s difficult to surmise just why nobody can keep their eyes off this Cobra, but it probably boils down to intrigue—you know it’s hiding something sinister, but you can’t quite put your finger on it.

A closer look unearths other details that allude to its intentions, like the perfect stance and a large intercooler lurking under the bumper. And then there are the not-so-conservative cues, like the custom plate.

“A buddy had a cool custom plate that said ‘VETHNTR,’” Kyle explains, “and it inspired me to get the ‘LS7HNTR.’ I guess it kinda stuck, since everyone now knows the car by the plate.”

You better be fast to rock a plate like that, otherwise you’ll be laughed off the road. Thankfully this Terminator has enough motor to blow away any competitor. When asked if he had lost to an LS7-equipped car since creating the plate, Kyle chuckled and said that he has yet to lose a race with the latest motor combo.

Yes, he said “latest,” because, as with many cars of this caliber, it has unfortunately seen as many motors as the average Mustang sees tires. We’re not counting, but he’s on the fourth.

Kyle says, “The stock motor unfortunately fell victim to a tank full of diesel. My mom took it for a quick spin to the gas station where they’d accidentally put diesel into one of the gas pumps. Needless to say, it killed the stock motor.”

Thankfully Greg and Beni of Racers Edge Tuning (RET), one of the premiere Mustang shops in SoCal, were nearby. Kyle called on their expertise for the reconstruction. Prior to the meltdown, RET had tuned the combo created by the previous owner.

“I’d bought the car from the original owner with only 20,000 miles, and hadn’t driven it very long when the stock motor was toast,” Kyle explains. “The previous owner had fitted a supercharger on it along with a Magnaflow X-pipe and cat-back, and it made 580 hp at the wheels.”

The second engine featured deep-thread ported heads, custom blower cams, and a refreshed stock bottom-end. “Unfortunately the second motor smoked a lot, and it never stopped, but it still made 620 rwhp at 18 psi," says Kyle.

As mentioned, the smoke never stopped, and the built motor drank oil at the rate it burned gasoline. Kyle says, “I was frustrated since the motor wasn’t running correctly and I was having trouble discovering if the heads or the rings were the source of the problem.”

Kyle comes from a family of gearheads. One day at the dragstrip he took a break from wrenching on his family’s race car, a 1966 Fairlane, to pay a visit to a man who many consider the modular motor guru, John Mihovetz of Accufab Racing.

“I hated to bother him at the race track,” says Kyle, “but I decided to ask him a few questions about my car. One thing led to another, and the next day I was taking my car to his shop for a diagnosis.”

As expected, Mihovetz quickly got to the bottom of the problem. Both the heads and the rings were faulty—that was the end of engine number two.

Of course, when Kyle was offered to try out another supercharger, he jumped at the opportunity. The result? Try 670 rwhp on 15 psi, which was 50 hp more than the old motor on 3 psi less of boost. As they say, efficiency is king.

Speaking of efficiency, there’s no question that a turbo nets the biggest return on investment for horsepower taken and horsepower given. The minute Kyle saw several Internet videos of twin-turbo Terminators tearing up the Midwest, he knew he’d never be the same.

“One day I realized that I just had to have a twin-turbo kit, so I contacted RET and told them that’s the direction I wanted to take the Cobra,” says Kyle.

As luck would have it, another local legend in the SoCal Mustang scene, GTR High Performance, had a new HP Performance twin-turbo kit for sale. Ask and so you shall receive. RET tore apart the flawless Cobra and swapped the blower for a twin-turbo kit that utilized a pair of 57mm turbos. With the pair of snails on full boogie and race gas in the tank, the new dyno numbers rang in at 850 hp at the wheels—on pump gas it made 712 hp at the wheels.

Kyle says, “The new combo was violent when it hit boost, and with the smaller 57mm turbos it spooled almost instantly. It was a totally different experience from the blower, and I loved it.”

As with all horsepower junkies, the novelty quickly wore off and Kyle was soon yearning for more power as he slowly started cranking the boost.

“I was coming back from a meet and noticed that the oil pressure was extremely low at idle, so I replaced the oil-pressure sending unit and harness, but that didn’t fix it. Then I knew it was a serious problem,” says Kyle.

He was right, but this time it wasn’t a fluke hardware failure. Rather, he’d been unknowingly running the wrong weight oil. The combination of big boost, high rpm, and too-light oil ate the main bearings. So it was onto motor four.

Kyle says, “This time Accufab built me a motor capable of 2,500 hp since I decided that if I was going to build it one more time, I might as well go big.”

And go big he did. The new motor retained much of the same upper-end components, like the ported heads and custom turbo cams, but it received an even stouter bottom end with top-rate JE and Manley components that still retained the stock 281 ci. While he was in there, he swapped the smaller snails for a pair of Precision ball-bearing 62/66 turbos with billet wheels along with matching Precision 50mm wastegates, a pair of TiAL 55mm BOVs, custom long-tube turbo headers from Accufab Racing, and a Turbosmart e-Boost 2 boost controller on the recommendation from Kristin at Turbosmart. Other goodies, like a Sullivan lower intake and an HPP upper unit, were utilized because of their appetite for big boost.

After the new motor was broken in, it was finally time to set the beast free on the rollers with race gas in the tank. Despite a massive octuplet of 80-pound injectors, the big Cobra inhaled so much air that it maxed out the injectors at just 5,800 rpm with the boost cranked to 20 psi. Even though the pull was shut down 1,500 rpm shy of redline, it still laid down . . . (wait for it) . . . 1,011 hp and 720 lb-ft at the wheels on a custom tune from Greg Monroe at RET. The motor was built for 30 psi and 7,000 rpm; can you imagine what it’s going to lay down with bigger injectors and set on kill? We’ve got one word for you: beast! But even on pump gas and low boost the new setup is still a brute. It makes 720 hp and 630 lb-ft at the wheels on paltry 91-octane fuel.

“The bigger turbos hit full boost around 4,500 rpm, and from there it pulls like a freight train,” Kyle says. “It doesn’t ever stop pulling.”

Of course, all that incoming air needs to exit in a hurry, so Kyle visited Jesus at Redline Performance Parts for supporting mods like a 3-inch offered X-pipe and a Magnaflow cat-back exhaust. He says, “I snapped a stock half-shaft the first time out with the new combo, so that necessitated a pair of Pro-Level half-shafts from the Driveshaft Shop.”

As expected, the rest of the drivetrain was brought up to fighting weight as well. The T56 transmission received a full Viper-spec makeover. Some 3.55 gears and a Ford Racing differential entered the pumpkin. A McLeod RXT clutch and a Fidanza flywheel landed fore of the transmission. The IRS was beefed thanks to Full Tilt Boogie bushings, Maximum Motorsports low-profile bolts, and a Steeda brace.

“The suspension setup is simple, but so far it works really well,” says Kyle.

Up front you’ll find a QA1 tubular K-member and control arms that work with Lakewood 90/10 struts and H&R springs. The same springs, along with Bilstein shocks, round up the rear. Steeda subframe connectors connect either end.

The right wheels are crucial to any project, and this Cobra is no different. Kyle says, “After talking with Steve at True Forged about the right wheels, we decided on some three-piece Chicanes.”

The fronts measure 18x9 inches, while the rears are 18x11 and rock a 4-inch lip. The color-matched centers and 3-inch extended studs only add to the elegance.

Kyle says, “Thanks to the Maximum Motorsports low-profile IRS bolts and the True Forged wheels with a custom offset, I was able to tuck 335s out back with only some fender-rolling.”

“I can’t decide if my favorite part of the car is the stance or the power and sounds of the turbo,” Kyle says.

Power or pose. That’s a tough decision. But before you go writing off this murdered-out monster as just a dyno queen, we have news for you. It has actually seen the track.

Kyle says, “I don’t have a cage yet, and I still want to add bigger injectors, rear coilovers and maybe an automatic trans, but on my pump-gas tune with drag radials and launching at idle, I ran 6.80 at 107 in the eighth-mile at Irwindale Speedway on my first pass before I was kicked out for improper safety equipment.” 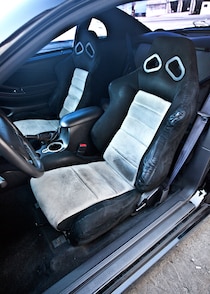 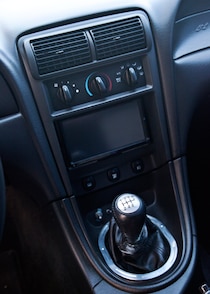 Why all the planed upgrades? Isn’t this Cobra already enough? He says, “My goal is to have the quickest IRS street-driven Cobra in the country.”

Big goals indeed, but one look at the caliber of this Cobra and we have little doubt that in time we’ll see Kyle’s name at the top of a list of fast Cobras. Look out, Mustang World! The LS7HNTR is coming.