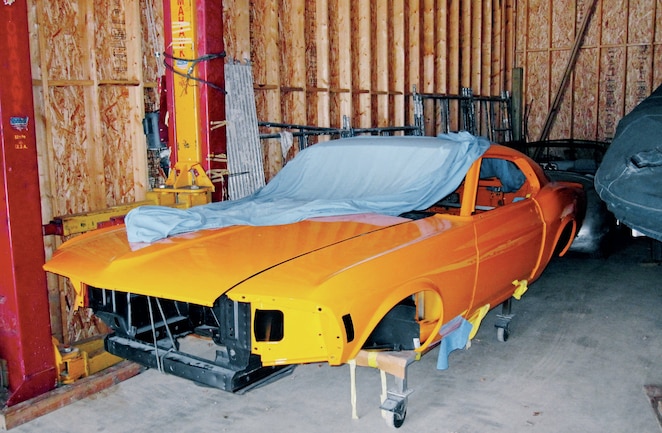 “On his way home Gary [Erickson] came by here and showed me the car,” Bob Perkins said. The car was a Grabber Orange ’70 Boss 429 with 1,600-odd miles on its odometer. Perkins lives outside of Watertown, Wisconsin, and Erickson, who lives in Minneapolis, found the Boss 429 in Springfield, Illinois. It’s hard to believe, but this event took place 30 years ago, in 1984; but Perkins never forgot. In his mind, he felt one day he might end up with this rare Boss, once Erickson got tired of it.

Right away Erickson took the Boss 429 apart for a restoration and began gathering parts. Then, last summer, Erickson finally sent the Boss for new paint to Kevin’s Klassics in Cannon Falls, Minnesota. “We were over there for an open house or something and my friend Dave Steine saw the car in bare steel, shortly after it was stripped, and he said, ‘Man, that’s a great body,’” Perkins said.

Seeing that Erickson finally painted the body, Perkins gave up on the chance of buying the Boss 429—he figured all Erickson had to do was assemble the car and it was game over. Then, last November, Perkins and Steine were at the Muscle Car & Corvette Nationals in Chicago, Illinois. “I said to Steine, ‘maybe Erickson will show up. He won’t be able to stand not seeing one of every color Boss 9.’”

Perkins is of course referring to the show’s big display of Boss cars (see last month’s cover story). Sure enough, Erickson showed up and he and Steine started talking. Funny thing, Erickson was ready to sell his Grabber Orange ’70 Boss 429 and Steine got the deal. Perkins could hardly believe Erickson sold his car. They finalized the deal the following month and Perkins went along with Steine to pick up the Boss. Apparently, when Erickson bought the Boss 429, the paint had been scuffed up to where the body had to be painted.

This Boss 429 was sold new at Krigbaum Ford in Springfield, Illinois. The current odometer reading is 1,608 miles.
A set of N.O.S. Goodyear Polyglas tires helps put this ’70 Boss 429 on track for an Authenticity award in MCA.

“You would rather have had original paint,” Perkins admits, but “the good thing about starting with a 1,600-mile car is the interior is brand new. You have 1,600-mile seats, 1,600-mile door panels, 1,600-mile carpet, and all the parts that come with the car, including the original trunk mat, all the wiring, all the little stickers and tags on the wiring.”

Steine is a collector and he knew what he was doing. He was nabbing a Boss 429 that had the makings of a Mustang Club of America Thoroughbred Gold Authenticity winner, an extremely high honor only a small number of Mustangs have ever attainted.

Erickson had begun gathering parts in the ’80s. One key component for Thoroughbred Gold that he gathered was a set of four date-coded correct N.O.S. Goodyear Polyglas tires with stickers on them. Steine was elated to see the tires still had the “little ink stamps” on the sidewalls. One tire even has its original sticker.

Erickson was very picky on his N.O.S. parts-gathering missions through the years. For example, he ordered four gas tanks from Ford back in the ’80s. He was aware the tanks arrived skinned up from sliding across the shipping dock. So, Erickson drove to Detroit to pick up his gas tanks.

Erickson knew that Kim Miller had found the glass “honey hole” in Madison, Wisconsin, at a place called Phillips Glass. “They went down and bought every piece of Mustang glass, so he [Erickson] had two sets of brand-new date-coded Car Lite glass in boxes for his Boss 429,” he said. Therefore, every piece of glass in the restoration, which Perkins will complete, will be N.O.S., brand new. Other new parts include bumpers, side marker lights, all the chrome and trim.”

Since Erickson collected his parts in duplicate, Steine got more than what might be the lowest-mileage ’70 Boss 429 in existence. He got a bunch of extra parts, since Erickson wanted to sell everything. The result will be, once Perkins is done, in the running for an MCA Thoroughbred Authenticity award. We can’t wait to see this car done and on display at the 2016 MCA 40th Anniversary Grand National show in Indianapolis.