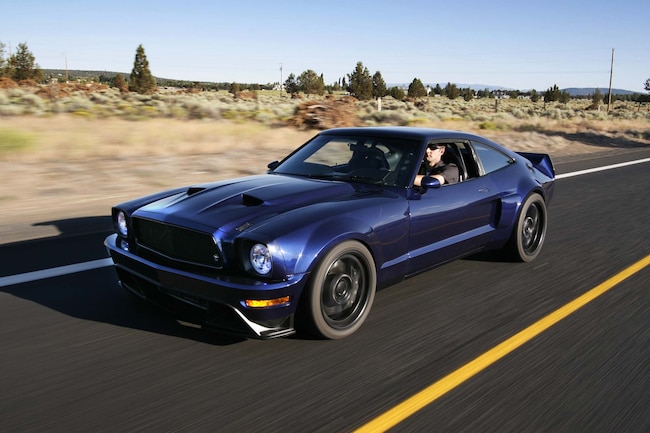 Without a doubt, 2014 was a year of unprecedented enthusiasm surrounding the Ford Mustang. It marked the ponycar’s 50th anniversary—with various celebrations and remembrances nationwide—and heralded the rollout of an all-new 2015 Mustang that promises to be among the best heretofore.

While focusing on the Mustang’s bright spots, little attention was paid to the 1974–1978 Mustang II, a car some consider a victim of its time. The Mustang II’s five-year run coincided with one of the darkest periods for domestic auto manufacturers, as they struggled with compelling new imports, air-pollution standards, and the oil embargo. Despite strong sales figures (which suggest the car was right for its time), the Mustang II remains largely unloved today—rarely subject to the attention slathered on every other Mustang generation. And yet Brett Behrens, the owner of this Mustang II, is unfazed by history’s view of his car.

“I grew up in a family of Ford fans, so when I began to explore the possibilities of building something rather extreme, it was obvious I’d stay true to my upbringing,” Behrens explained. Few people have explored the possibilities that a Mustang II represents, but Behrens is one of them. “I always thought the potential was there, but felt the car came off pretty awkward with its short wheelbase and small wheelwells. Despite that, the overall profile and modest physical size and weight are really appealing. Frankly, I like to be a little different and decided on the II over a variety of other options.”

Ideas for a Mustang II built with Behrens’s dream list of V10 power, rear-mounted transaxle, 2005–2013 C6 Corvette suspension, and 50/50 weight distribution began to finalize in 2012. Once Behrens connected with designer Ben Hermance for a full set of concept renderings, he was committed. Hermance’s work depicted a Mustang II with the wheels pushed toward the corners, 2005 Mustang wheel openings, and a 10-cylinder engine.

Coined “Mustang Evolution,” Hermance explained, “This was the first time I'd been asked to work on a Mustang II, but I've always been interested in these cars. Expanding the wheelbase and track was something Behrens and I agreed on immediately. What we wanted to do was make sure the car was identifiable as a Mustang II, but update it with some modern and aggressive details”.

The artwork was proof that what Behrens had in his mind would look good on paper, but what about making the jump to the real thing? With ideas well beyond his own scope of wrenching, Behrens turned to Gordon Aram and the rest of the crew at A-Team Racing in Bend, Oregon. Aram was confident the build criteria could be met and soon acquired a 1978 hatchback to get things started. Behrens simultaneously purchased a wrecked 2008 Z06 Corvette, which donated the six-speed transaxle, torque tube, independent rear suspension, front suspension, rear suspension, and six-piston brakes. The engine was another animal all together.

Pop the hood on the completed car and even a newbie will find the size of the engine considerable. We found ourselves asking why not a much more straightforward stroker Windsor or Coyote 5.0L—either of which could make as much or more power initially. “Because that would’ve been easy,” said Behrens, who feels the 413ci overhead cam V10 has plenty of untapped potential to build upon.

The engine began life as a Triton 6.8L from a 2005 Ford truck, and it’s still mostly stock while Behrens gets the car comfortably dialed in. Rebuilt by A-Team Racing, it does feature a custom equal-length intake, 90mm Accufab throttle-body, 50-lb/hr injectors, camshafts reground by Isky, and custom long-tube headers. FAST Specialties put a tune on a factory Ford computer, resulting in peaks of 396 hp and 475 lb-ft of torque at the rear wheels. Not surprisingly, Behrens reports abundant torque down low, and with just 3,000 pounds to move, the Mustang II is quite a monster as is. Power specs are much in the same range as a first-generation Viper V10, so it seems in good company in the early stages.

Fitting the V10 was easy when compared to the rest of the build, which is rooted in a custom frame that was designed and built by A-Team Racing. Not only does it allow for fitting the myriad Corvette components, it was also critical for implementing the 12-inch-longer wheelbase that Behrens and Hermance had found so visually important. A-Team Racing employees Avery Bell, Ryan Gridley, and Mike Teagarden did the bulk of the custom bodywork, with everything but the front fascia being made from metal. Upon completion, it was Aram who sprayed the R-M two-stage Kona Blue paint, a color from the current Mustang palate. In fact, there were times when we found our minds momentarily believing we were shooting a widebody version of a 2014 Mustang GT500. The color, wheelwells, general profile, and horse-collar frontend are all rather familiar.

While this Mustang II has a familiar quality, it’s decidedly different, fresh, and interesting. The car has struck a chord at every venue it’s played thus far, including a first in class at the 2014 Detroit Autorama, proving Behrens and Aram had the guts to take a maligned child of the 1970s and do things with it that haven’t been done before. 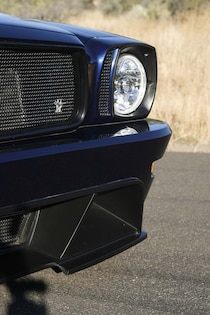 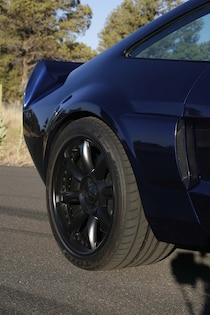 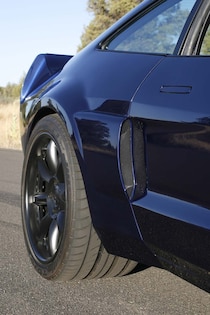 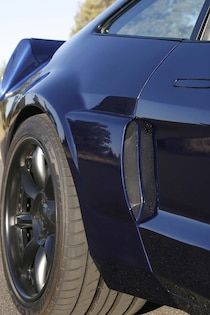 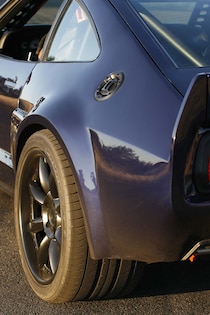 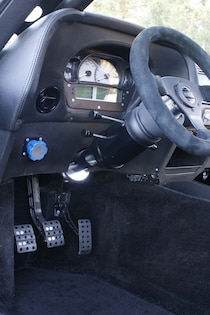 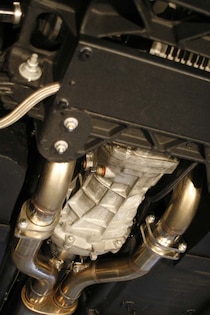 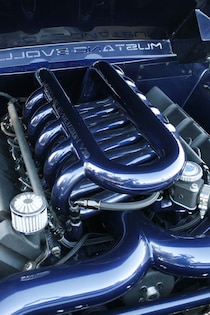 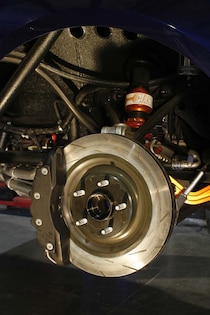 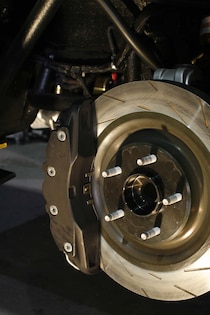 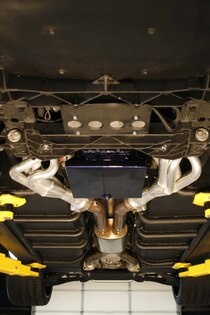