One of the most important and historical Boss 429s ever built 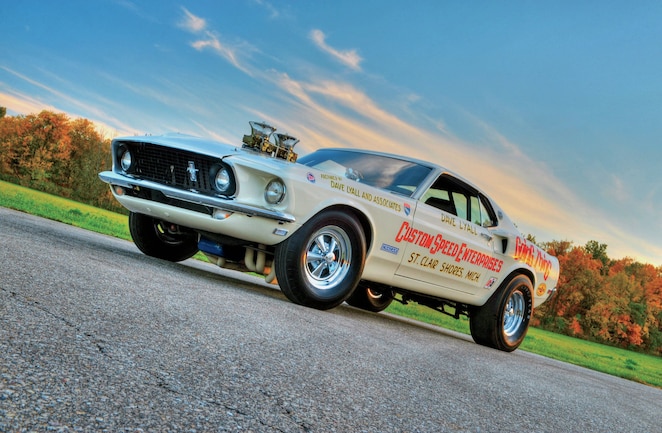 Like this story’s subtitle says, this Boss 429 is one of the most important and historical Boss-9s ever built. It is KK1213, one of five pre-production cars (all black) assembled by Kar Kraft in Brighton, Michigan. So, why is this car white? And why does a pair of Holley four-barrel carburetors with velocity stacks rise out of a fiberglass hood like a wild hot rod? What is the lettering all about?

Richard Ellis, a prominent Ford collector, discovered KK1213 on eBay 10 years ago. The owner, Gary Horton, had purchased the drag car from Dave Lyall, who was the original owner and racer. Horton continued racing the car for decades, and even displayed KK1213 at Ford’s 100th anniversary celebration in Dearborn, Michigan, in 2003, but then decided to sell it, and Ellis came into the picture. Once he had the car in his possession, Ellis faced a very tough decision: should he restore the car back to Raven Black, as this pre-production Boss 429 left the assembly plant, or should he rebuild the car as the drag racer it had always been? Ellis decided upon the latter, and history is being so much better served. The current owner, Dave Steine, agrees.

The mighty Boss 429, with two Holleys on a tunnel ram, was an intimidating sight in 1969, even at the dragstrip where it faced off against the heavy artillery that included the Chrysler Hemi and Chevy big-block.

To search out the history, we went to Dave Lyall, who bought this car under a Ford “dollar contract” to drag race in the summer of 1969. Lyall worked for Ford as a dynamometer test technician. He was busy weekends racing his ’68 Cobra Jet Lightweight, plus his new toy, a ’69 Cobra Jet (another dollar car under contract with Ford) that he had fitted with a 427 Tunnel Port for AHRA drag racing. Of course, in early 1969, part of “The Going Thing” (Ford’s slogan that year) was the new Boss 429 engine, featuring those exotic hemispherical combustion chambers and aluminum heads. Ford built this engine in sufficient numbers, over 500, for production cars to homologate for NASCAR oval track racing. Drag racing was a secondary outlet for Ford’s hot new engine.

The Boss 429 program had been underway for months. On the pavement at the Ford Proving Grounds in Dearborn, on Oakwood Boulevard, the division was “playing with” (Lyall’s words) a Boss 429, one of the pre-production cars, numbered KK1213. Lyall said recently, “Ford asked me if I would take this car they had started to work on to run in Super Stock. It was originally I guess a magazine car. They couldn’t sell it because it was a pre-production car. I’d had good success racing my 428 CJ in Super Stock. As a matter of fact, I won the class at Indy in 1968 in the CJ.”

Wayne Gapp (later of Gapp & Roush) also worked at Ford and was Dave Lyall’s neighbor. Lyall and Gapp took the car home to set it up for NHRA Super Stock racing, and testing and tuning revealed low 11s, or about what the 428 Cobra Jet ran in the ’68 Lightweight. Lyall told Ford the bad news—KK1213 was not going to be competitive in Super Stock, but Lyall had another idea.

Gary Horton owned KK1213 for over 25 years, painting it black and drag racing the car, as seen here.

At the time, Lyall was running a modified Holman-Moody Boss 429 in his ’69 Mustang Cobra Jet dollar car that he was racing the car in NHRA and AHRA. “Their rules were different for what modifications they would allow to the body of the car. If I went to an NHRA track, they would make me run glass windows and two seats.”

Racing one car for both associations and working a full-time job at Ford was running Lyall ragged, but he had an idea to help both him and Ford. He asked Ford if he could keep KK1213 to set up for NHRA and continue running his current ’69, already set up with a Boss 429 NASCAR engine and running in AHRA match racing. Ford said yes. “I signed another dollar contract with Ford and that’s how I got that car [KK1213],” Lyall said.

Lyall was the perfect candidate to make the Boss 429 go fast. He knew this new engine’s foibles because he had been running a NASCAR version of the Boss 429, which he describes as “a regular Boss 429 NASCAR engine from Holman & Moody” in his ’69 Mustang match racer. Lyall said, “I unbolted the 427 tunnel port, put the 429 in it, and it slowed it down from 9.90 to 10.30.” Work then progressed to get the Boss 429 to run the numbers that the 427 had been, and that’s where the benefit to Ford’s racing program came from.

Lyall told us, “I worked with Connie Kalitta, who was a childhood friend of mine. He was running a Boss 429 in his dragster.” Needless to say, Kalitta knew how to make a Boss 429 run on the strip. Remember, Ford engineered the engine primarily for the high-speed NASCAR tracks—drag racing was a secondary thought, and it was up to drag racers like Kalitta and Lyall to sort it out on the 1,320 foot strips around the country.

“Connie gave me one of his crankshafts, a set of aluminum rods, a Crower roller cam, and roller lifters. After some initial testing I set the engine 3 inches back and took maybe 500 grams out of the rotating assembly.” Lyall also worked with Weiand on a dual four-barrel tunnel ram intake manifold, which is the one on the car now.

Lyall applied his experience to KK1213 for Pro Stock NHRA racing. Of course, he could not start with a Holman-Moody NASCAR Boss 429 engine. The heads were different—bigger valves and ports; different rocker arms; and there was no water crossover on the intake, compared to the street version in the Boss 429 Mustang. With his good old hot rod know-how, Lyall managed to push a production Boss 429 engine, with the modifications allowed in Pro Stock, into the 9.90s.

His sponsor, Custom Speed Enterprises, paid him $2,500 per year to have their name on the side of each car. The sponsor liked the white paint. Lyall actually used the identical paint and lettering on KK1213 as he did on his ’69 match-racer. In fact, he used the same painter. He even painted the cars at the same time. From the outside, the two Mustangs look alike. The match-racer, which was originally a Cobra Jet, has a gold-colored interior, whereas KK1213 has a black interior.

Lyall continued racing KK1213 through the end of the 1969 drag racing season. Ford was still producing the Boss 429, of course, and as we know the body style was the same except for minor revisions. In the winter of 1969-’70, Lyall changed the grille, taillights, and tail panel to make the ’69 look like a ’70, and he raced both cars again in 1970.

At the end of the 1970 season, Lyall said, “Ford pulled my Holman-Moody charge account. I was going to lose all the free parts and free cars from Ford.” So he sold both cars and his truck. The ’69 match-racer crashed early in the 1971 season and was scrapped, the powertrain making its way into a Maverick.

Gary Horton from Ohio purchased and raced KK1213 under his own colors until nostalgic drag racing took off. He painted the car back to original and finally sold the car about 10 years ago to Richard Ellis, who restored the car to its Dave Lyall “Custom Speed Enterprises” paint scheme. Through the Bob Perkins Boss 429 grapevine, Ellis incredibly found the original matching-number Boss 429 engine! The engine was stamped with the VIN’s last six digits—150388. In other words, 150388 corresponded to KK1213, according to Ford records. Horton was even still running the original pair of Holley 660-cfm carburetors, mounted on the same Weiand intake manifold that Dave Lyall developed for Pro Stock.

It just took somebody in the hobby to buy and restore to original. But, what is original? Original could be the black Boss 429, KK1213 just like the day it rolled out of Kar Kraft. In the opinion of Richard Ellis and the current owner, Dave Steine, as well as Boss 429 guru Bob Perkins, original for this car is the manner in which Dave Lyall built the car, as part of Ford’s “Total Performance” racing campaign, to drag race in the new Pro Stock series.

According to a document from Kar Kraft files (owned today by Bob Perkins), Kar Kraft numbered each Boss 429, starting with “KK1201.” KK1201 through KK1207 were prototypes. KK1208 and 1209 were “Pilot Line” cars. KK1210 through 1214 were pre-production cars. Apparently, the early cars have been demolished after Ford used them for various testing purposes. The earliest Boss 429 known to exist is KK1213, seen here.