Out with old, in with the fresh Coyote powerplant. 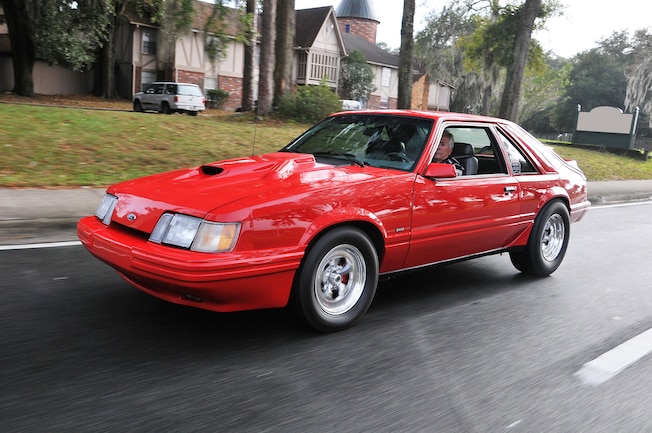 Wayne and Debbie Vance from Newland, North Carolina, raise Christmas trees for a living. They look forward to their last planting so they can get ready to retire. Both are lifelong Blue Oval fans, having owned numerous turbocharged and supercharged Fords.

When they are not managing their acreage, this active pair campaigns their current 1986 Mustang SVO at car shows throughout the Carolinas, Kentucky, Tennessee, Georgia, and Florida. In the last 18 months they have racked up an impressive collection of 46 trophies. What’s their secret to success?

Vance says, “When we competed in Bowling Green, Kentucky, our car got five major trophies, including People’s Choice and Best in Show. When we go back next year it has to be updated. As long as we can keep this one freshened up, we’ll be OK.”

“Freshening up” has been a continuous process for the last 15 months.

They got their 1986 from their son, who purchased it from a friend in 1987. He used it while he was in college, but once he started a family he retired the car and it sat unused for almost a decade.

Vance bought the car in 2013 and decided to remake it into his own version of the ultimate Mustang. The SVO was originally equipped with a 2.3L Turbo four, but Vance wanted a V-8, so the first step in the upgrade was research. When he asked his friends who was the best Ford builder in the area, Dale Minton with Fatboy Fabrication in Bristol, Tennessee, was the unanimous choice. Since the Vances live just across the North Carolina line (about 30 miles away), they contacted Minton and began the build process.

In the opening conversation about modifying the SVO, Vance was leaning toward a push rod 302, but Minton countered, suggesting, “If you really want the ultimate engine, I’ll send you a link. After you look at it, let me know what you think.”

At that point (almost three years ago) Vance knew very little about Ford’s new Coyote motor, but after reading the specs he realized Minton was right. They went ahead with the plan, installing the 5.0L Coyote Aluminator crate motor, powerful in its own right but with a healthy layer of icing on the cake. Since the motor was already built with bulletproof internals, upgraded aspiration began with a 2.3L Whipple twin-screw supercharger fitted with a 2.75-inch pulley and custom 4-inch-diameter aluminum air cleaner. Ford Racing 60-pound injectors are fed by a Kurgan Motorsports billet Pump Hat with twin 340L Aeromotive pumps pulling 93-octane from an Aeromotive tank. After the Ford Control Pack electronic ignition lights the fire, BBK long-tube, 1 5/8-inch ceramic coated headers with a 3-inch X-pipe, electric cutouts, and Flowmaster mufflers join forces to minimize backpressure and create a NASCAR-level soundtrack in the process. An Engine Works fan and Griffith aluminum radiator keep temps in the green. Ron Lund from Lund Racing fired up his laptop to provide a custom tune, squeezing out 582 reliable rear-wheel horsepower and 525 lb-ft, ensuring that this Bad Ass Stang lives up to its name.

Big numbers from the engine were just the beginning. Every element of the car was methodically strengthened in some way. Minton recommended the Tremec T-56 Magnum Double Overdrive six-speed mated to a Centerforce dual friction clutch and flywheel and controlled by Steeda’s Tri-Ax Short Throw shifter. Power gets to the ground through the narrowed (4 inches) Ford 8.8 rear fitted with 3.55 gears and Moser axles and held in place by Maximum Motorsports adjustable lower control arms. While straight-line acceleration is always one of the main goals, turning was just as important, so welded-in subframe connectors increased torsional rigidity and the original Koni shocks on the SVO were replaced with Strange adjustable singles. Hypercoil coilovers and a Team Z K-Member completed the front end. Wilwood Pro Series drilled and slotted four-wheel disc brakes, a Hydroboost brake conversion, and stainless steel brake lines bring the gallopin’ Stang to a halt. The rejuvenated ride rolls on Weld Racing Classic RT wheels, 15x4 up front and 15x9 in the rear. Mickey Thompson ET Street Drag radials (26x6.0 up front, 275/60-15 in the rear) ensure a strong contact patch. Vance wanted to keep the exterior as original as possible because there were so many unique items found only on the SVO line, like the unique front grille, thinner side moldings, smoother sail panels behind the rear quarter windows, small rear wheel spats, pinstriped taillights, and the biplane spoiler. Fatboy Fabrications reworked the fiberglass hood, adding a telltale bump to accommodate the Whipple. Originally factory white, the Mustang was resprayed a rich Vermillion Red by Carmart in Bristol, Tennessee, to match Vance’s 2008 F-250 tow vehicle. Adding a touch of class to the cockpit are the TMI leather seat covers and leather-wrapped SVO wheel, which were stitched by J&J Upholstery in Elizabethton, Tennessee. Vance monitors underhood activity with a Racepak UDX Street digital dash package in a custom-fabricated aluminum bezel. Wrapping up the changes, the battery was relocated to the rear hatch.

As one of the earliest Coyote swaps in the country, Vance recalls that the wiring was something of a challenge, but they worked it out. Obviously Ford has simplified it since then. The only regret is going with the Ford-recommended, lower compression approach because Vance has since heard of several high-compression versions that the Coyote handled well.

Plans include regular updates, and Vance is looking forward to Ford’s new flat-plane crank. The new shaft allows the engine to rev faster and higher, thanks to cylinders that fire in alternate banks rather than adjacent cylinders in the same cylinder bank firing in succession. Flat-plane cranks force exhaust gases out faster and eliminate the need for counterbalance weights, allowing for a significantly higher rev limit. When the engine is introduced in the 2016 Shelby, VAnce is hoping a crate version will soon follow. Other possibilities for his ever-changing SVO are a twin turbo setup or an upgraded supercharger. He says, “We are going to keep the car competitive so that it is different each year at the major events.”

How is the completed car to live with? Strictly for the street, the car does not spend any time on the strip, although pumping out almost 700 hp at the crank, it is certainly race-capable. It has 3,200 miles since the latest changes. Vance says with a smile that he has only been pulled over twice, and Debbie laughs, since she was clearly the instigator. They were at a Mustang dyno challenge in Myrtle Beach. As each of the cars left the test site, many did burnouts to entertain the crowd lined up in lawn chairs. The police were fairly tolerant, so Debbie encouraged Wayne to open the electric cutouts and light ’em up. It was an impressive display, but moments later, blue lights began to flash. The officer arrived to inform him that his fun was going to cost him $155 but no points on his license.

Debbie’s reaction? “Can we do it again?”

Apparently the other drivers got away with it, but the combination of the open pipes and high-revving Aluminator gave the Vances’ car the sound of a Pro Mod, enough to trigger the officer’s response.

“Maybe next time,” Wayne says smiling, “we will do it with the cutouts closed.”

Wayne sends special thanks to Debbie for her support and understanding during the build and recognizes the amazing talents of Dale Minton, Larry Bare, and Richard Markland.