A Fox-body Family Affair: Father and son notchbacks that are as clean as they are cool 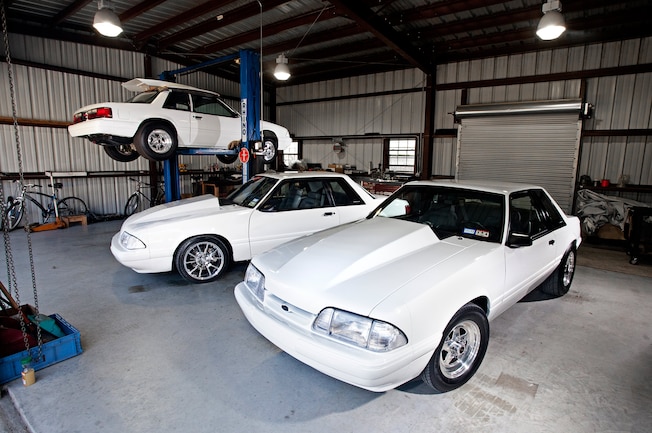 The Schreffler household was hardcore Chevrolet until an interesting turn of events changed the course of family history. For one, Mama Schreffler bucked conformity when she got a brand-spanking-new 1988 Mustang GT for her daily driver. It was the first Ford in the family, and it went unnoticed by Gary Sr., a diehard Bow Tie guy. That was, until she got her second Fox-body, a 1993 LX coupe.

Gary Jr. says, “My father never thought much about the Fords until he and my mom lined up at a stoplight together, he in his 1979 Stingray Corvette and her in her LX coupe. When the light turned green she smoked him.”

That was all it took for Gary Sr. to switch to the dark side. He started by modding his wife’s LX with gears, exhaust, and other modifications. Before long it was less a daily driver and more a hot rod. As you might guess, Gary Sr. and his son Gary Jr. bought mom another daily driver and turned her little stock coupe into an all-out drag car that eventually ran 9.80s with an R-block based 347 and a Vortech YSI blower.

It started with a V-8 conversion in his factory four-cylinder LX, and before long it received a 418W making 750 hp on motor with a 250-shot of N20 from a Fogger system on top—it too exploded into an all-out drag car.

At about that time, Gary Jr. was looking for his second Fox. You guessed it—another daily driver. He says, “Since my first Fox quickly became unstreetable, I started looking for a daily driver and eventually found a 1993 LX coupe that had a 347 with a bad vibration. But it had a roll bar and a Powerglide transmission, and both the interior and exterior were flawless. The owner also included a Tremec 3550 transmission.”

The vibration ended up being a bad motor from several bent valves, so Gary Jr. sent his motor to the talented hands of Bruce Thornton at USA Racing Engines. Under his careful supervision, the stock block was poked to accept forged JE flattop pistons with valve reliefs and then machined to accept a forged 4340 crank along with a set of forged H-beam rods that create 347 ci of Ford muscle. Of course, the motor received ARP 2000 hardware wherever possible and the stock block was fortified with main and rocker girdles for a secure foundation.

“The motor was installed with the stock computer and harness first,” says Gary Jr., “but I quickly decided to make the jump to the Holley Dominator EFI system with the touchscreen display since it offers so much more flexibility and is honestly one of my favorite upgrades.”

Along with the wicked Holley EFI system, he added plenty of MSD ignition upgrades and converted the car to speed density. A set of 30-pound injectors joined the party, as did an Aeromotive 340 Stealth in-tank pump with matching fuel rails, a regulator, and dual AN-8 feed and AN-10 return lines as well as an Innovators West billet timing pointer and an MSD Flying Magnet Crank Trigger assembly. Cooling duties were left to an aluminum three-core radiator with a Black Magic electric fan.

“While the motor was out for the rebuild I got the bug to paint the car, but like anything in our family, we couldn’t just do it halfway. We were after perfection,” Gary Jr. says.

And so the car was stripped to a bare shell before being sent off to Bayway Collision Center and Bodyshop for an immaculate redo. Believe it or not, the hue before you isn’t a factory Ford color, but rather GM Summit White.

With a flawless shell, both son and dad got to work painstakingly reassembling the car with a ton of NOS interior and exterior parts along with plenty of aftermarket upgrades. A UPR tubular K-member and A-arms landed beneath the engine bay as well as Energy Suspension polyurethane bushings throughout, BBK caster/camber plates, Eibach ProKit springs, and Strange single-adjustable shocks. Out back, Eibach springs work with Lakewood 50/50 shocks and matching Traction Action lift bars along with UPR upper rear control arms.

The stock 8.8-inch rearend was painted to perfection and then filled with a 31-spline locker with 3.55 gears; five-lug, 31-spline Moser C-clip axles; a TA differential girdle with ARP main cap studs; and extended ARP wheel studs.

“Another one of my favorite parts are the brakes,” says Gary Jr. “They're phenomenal. I opted for a Wilwood aluminum master cylinder and proportioning valve along with Aerospace Components four-piston front billet calipers and cross-drilled and slotted rotors up front along with the matching dual four-piston caliper rear Drag Bags setup with matching rotors.”

Can you imagine a lightweight Fox-body with six four-piston calipers and massive rotors? Talk about stopping power! But power is nothing without control, so the Tremec 3550 transmission and Ram clutch, pressure plate, and flywheel replaced the Powerglide to put the power in motion. The 17x9 front and 17x10.5 rear chrome FR500 wheels and the Bridgestone front and 295/45-17 Mickey Thompson rear drag radial tires help with progression.

Over 13 years ago, after Gary Sr. turned his wife’s 1993 LX into an all-out racecar, he proceeded to sell it because it was too radical.

His son says, “After selling the race car, my pops missed owning a Fox-body so much that he found this 1992 coupe in a nearby town. It was in good shape and had a few bolt-ons.”

It might have been clean, but for anyone who knows Gary Sr., his cars can never be clean enough.

“My pops keeps the underside of his cars as clean as the topside. The day after each cruise he puts the car on the rack and details it from top to bottom. He even waxes the underside,” says Gary Jr.

Yep, he’s the kind of guy you want to buy a used car from! So it only made sense that the stock coupe just wasn’t clean enough. Months after Junior tore his car down to shell, painted it, and rebuilt it to perfection, Senior did the same. It too received the Chevrolet Summit White paint along with a ton of NOS part inside and out.

All that air needs plenty of fuel, so an Aeromotive 340 Stealth intake pump, fuel rails, and regulator with single No. 8 feed and No. 6 return lines and the 30-pound injectors feed the beast.

A keen eye will note the Optima battery trunk relocation with the master power cutoff switch along with the MSD Digital 6AL, billet distributor, and wires. What isn’t immediately evident is the SCT custom chip tune from Auto Adrenaline, the King Cobra clutch behind the T5 transmission, or the Ford Racing driveshaft.

Speaking of rearends, the stock 8.8 was filled with a 31-spline Ford Racing differential and 3.73 gears along with Moser 31-spline axles, a TA girdle, and ARP main cap studs.

Extended ARP wheel studs at all corners support a Baer disc-brake conversion with an SSB distribution block along with classic Weld Prostars in a 15x3.5 front variant wrapped in 165-R15 rubber and 15x10 rears with 275/60-15 Nitto NT555R drag radials.

If ever photos didn’t do something justice, these two coupes would be such a case. The word clean doesn’t even begin to do describe them. They’re so clean you could eat off them, even the underbodies.

What’s even cooler than having clean coupes is the quality time this father-and-son Fox-body team gets to spend together.

“My father and I hit local cruise nights and shows every week,” says Gary Jr., “and the only thing that stops us is bad weather. Otherwise we never miss it.” And that, friends, is priceless.