Don’t you wish you still had your first car? Ricky Daniels doesn't, because he still owns it! 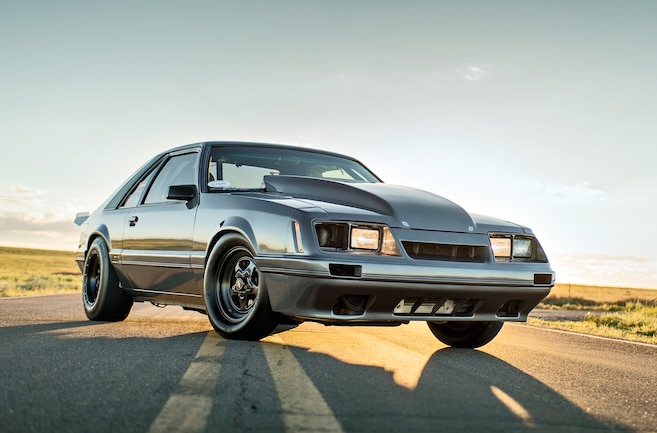 Chalk it up to inexperience, a bad decision, or a lack of self-control, but most cool cars from high school just don’t survive.

If you were lucky enough to get a cool ride rather than Grandpa’s hand-me-down Caravan with faux wood and all, it likely didn’t make it. Maybe it was a burnout gone wrong or an ill-fated rainy night, but most high school cars meet their demise by way of an immovable object. And if your high school ride was a Mustang or another muscle car, you might as well have kissed it goodbye because, let’s face it, V-8 power, rear-wheel drive, and temptation can be a recipe for disaster.

But there’s always an exception to the rule. When Ricky Daniels got his first car, a 1986 Mustang GT, he vowed to keep it intact. He says, “My father gave me the keys to this silver four-eyed Mustang GT on my 17th birthday and I was immediately hooked.”

The GT might have been stock save for some Weld Draglites and Flowmaster mufflers when he got it, but it didn’t stay that way for long. “I didn’t know anything about Fords when I started, but I spent every penny of my paychecks on performance parts,” he recalls.

Although he was raised in a house of horsepower since his father had a Chevelle bracket car and later a top alcohol dragster, this was the first Ford to join the Daniels family. It didn’t take Daniels long to realize how well Fox-Bodies respond to performance parts.

“After an intake and gears, I started saving for a turbo, but the money was burning a hole in my pocket, so I bought an NOS dry kit and put it on a 100-shot,” he says.

The bolt-ons and 100-shot put his GT solidly into the 13s, but filling bottles every week quickly became a chore. He says, “The bug to buy a turbo returned, but as soon as I managed to save a small pile of money, it started burning a hole in my pocket again, so I bought a Vortech S-trim blower.”

The stock motor and S-trim combo made 380 rwhp and dipped his Fox into the high 12s. It pacified him long enough to address other areas like a five-lug conversion with SN95 rear brakes, 17-inch wheels, and other supporting mods. But his joy was to be short-lived.

“A buddy of mine took me for a ride in his Fox-body with an HP Performance turbo kit, and I was hooked. There was no way I would settle for anything else that time,” he says.

A year later he had his very own HP Performance turbo kit with a 60mm snail and an E-cam. Power rose to 480 rwhp as e.t.’s dropped into the 11.50s with the T5 trans. When the stock stick bit the dust, a built C4 automatic on the same combo dropped the GT into the 10.90s.

As you might guess, things quickly ballooned from there. Accidentally landing in the high 10s without a cage at your local track might apologetically work once, but do it twice and you’ll get the boot. Daniels says, “I was kicked out of the local track for not having a cage, so over the winter I had an 8.50-certified cage built with the intention of growing into it.”

And grow into it he did, as a BTE Powerglide and a custom PTC converter were next, followed by a new bullet and an even bigger turbo.

“I found a used 8.2-inch deck height 347 and some used Edelbrock Victor Jr. heads for cheap,” says Daniels, “so I threw the motor together and upgraded to an 80mm BorgWarner turbo in preparation for the local True Street shootouts.”

Up until this point he had run the car with a stock ECU and a C&L MAF, but when an upgrade to a piggyback unit fell short of his power goals, he added the current injection setup. This fortress of proven tech includes a FAST standalone that’s augmented with an MSD distributor, a Digital 7 ignition box, and a matching coil, along with FireCore50 plug wires. Other electronic goodies include a Leash Electronics boost controller, a Davis Technologies Bump Box, and a Racepak Sportsman controller.

As luck would have it, Daniels’s first big race was the Street Car Super Nationals, where he ran 5.50 at 135 in the eighth on the diminutive class-spec 26x8.5-15 tires. That run was to be his last on that motor, as two pistons melted into oblivion.

Down but not beaten, Daniels returned home determined to return stronger than ever. The block and Edelbrock Victor Jr. heads were salvaged, but the rest of the combo was changed for the current setup. Displacement was bumped to 363 ci thanks to an Eagle stroker crank and rods attached to CP pistons. The Edelbrock heads were filled with new valves that are tickled by Comp Cams Pro Magnum rocker arms and a custom Comp Cams solid-roller camshaft that specs out at 0.672/0.674 lift, 283/287 duration, 115 LSA. An Edelbrock Super Victor intake manifold and elbow work with an Accufab 90mm throttle body feed the beast.

After a rogue failure with his 88mm turbo, Daniels jumped to a Custom Racing Turbos (CRT) 94mm turbo with a cast wheel. Despite the elevation of the big Denver PSCA Rocky Mountain Series event, the new setup ran 5.70s—but again, that just wasn’t enough. So Daniels upgraded to a billet wheel and that dropped him into the 5.50s at the same track. The billet wheel was good for another 150-200 rwhp, for a grand total of 1,400 rwhp at 28 psi of boost.

After lots of tuning and several trips to the final round of various PSCA Outlaw 8.5 events, Daniels finally got it right. He says, “We eventually knocked down a best pass of 5.29 at 140 mph in the eighth and won our last PSCA race with a 5.35 at 140 mph.”

Not only did he nab his first victory, but he earned enough points to take Second Place for the season. Speaking of winning, Daniels has also won the infamously challenging All Out Call Out heads-up True Street event at his local track, where he has run a best of 8.62 at 165 mph in the quarter-mile on just 18 psi of boost and bigger 28x10.5 slicks. He credits his speed to a well-planned combo that might not be glorious, but simply works.

Fueling duties are left to 160 lb/hr injectors plugged into Edelbrock fuel rails that work in unison with the Aeromotive A1000 fuel-pressure regulator and the MagnaFuel ProTuner 750 pump. Cooling duties are handled by an aluminum radiator and a Meziere electric water pump.

The slammed stance and black wheels add to the ominous nature of the dark gray paint, which has its origin in a factory BMW color. Of course, the H.O Fibertrends cowl hood and the Team Z strutless rear wing that resides just above the rear chute don’t hurt its sinister style either.

Life inside the single-digit Stang is also all-business thanks to Kirkey Racing Pro-Drag seats and Simpson harnesses along with the aforementioned 8.50-certified cage and a plethora of Auto Meter gauges. A stock steering wheel keeps the car pointed straight, and a Hurst shifter mans the two forward and one reverse gears.

Daniels says, “Even after all these years I still love the car, especially how it looks and performs, but I’ve got bigger plans for it next year.”

What’s he got up his sleeve? A 25.5-certified cage and a front-mount turbo setup with a smaller 88mm billet turbo so he can run at more events thanks to the more popular X275 and X235 classes. So if you find yourself lined up with this low-key GT, you better bring your A-game. Don’t say we didn’t warn you.