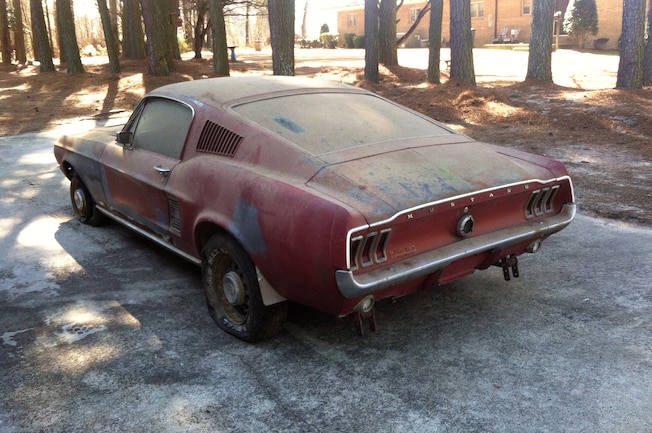 “You couldn’t see the ’67. It was probably 75 to 100 yards down a hill inside a pole barn behind her house,” Junior Deese said. As he walked down the rugged North Carolina countryside, Deese struggled not to get his hopes up too high, having been disappointed far too many times in the last five or six years—he once looked at a $7,500 fastback that turned out to be nothing more than a shell. Then, one day he got a call from a lady who lived in Erwin, North Carolina, about 35 minutes from his house in Smithfield. Nancy Snipes was her name and she had a Mustang and was thinking about selling. Her response didn’t even come from an ad—Nancy got Deese’s name and number from her son who had been talking to somebody at a local car repair shop. This somebody knew Deese was looking to buy a Mustang fastback.

The Mustang was parked in a pole barn against the back wall where no sun or rain could get to it.

Nancy’s husband, who died several years ago, had put the 1967 Mustang (which he would never sell) in a pole barn 15 years earlier. Nancy knew the Mustang was bad on gas and that’s why she and her husband parked the car 15 years earlier. But she had no idea what engine was underhood. Understandably, Deese was expecting a good car this time and his anticipation built with every step he took with visions of a big-block ’67 Mustang fastback dancing through his head.

The pole barn consisted of two sides and a back. Deese spotted the rear end of a red 1967 fastback in the back of the structure, out of the reach of the sun and rain. All four tires were completely flat, but overall the body sparkled under spotty layers of dust. “You couldn’t walk around to the front of the car and the driver side was so close to the wall you could only open the door maybe 12 inches,” Deese said. He popped open the hood to stare at a 390 FE big-block, appearing factory stock and completely intact. Needless to say, Deese was elated. He had found the fastback he’d been hunting for years. This car even had the factory GT package and a stock C6 automatic transmission.

The body was dusty, but rust-free and in good overall condition, despite being parked on a dirt floor for 15 years.
The ’67 wore shackles for bigger tires, but the suspension was otherwise stock.

But Nancy wasn’t sure she wanted to sell. Her husband had died three years earlier and the Mustang had been in the family for the past 30 years, so it held a lot of memories. Selling seemed like a good idea, but actually parting with the car would be difficult. So Deese neither pressured her to sell nor ran down her car to try to get a better price. He told her how much he liked her Mustang and wanted to buy the car to restore and drive. This attitude was a breath of fresh air—Nancy was used to would-be buyers running down her ’67 to lower the price. She liked the fact that Deese thought highly of her ’67 fastback and wanted the car to restore it.

Deese told us, “She said, ‘I hate to sell it. I’ve had it for so long.’” He was sympathetic and understood how a car could become like a member of the family, but after an hour and a half Nancy agreed to sell and Deese remembers her saying, “You know I’m going to cry now.” He handed her the cash and she walked inside her house to count the bills. “When she came back outside,” Deese told us, “I said, ‘are you going to be okay?’ She said, ‘That’s a lot of money. I’ll be just fine.’” Deese promised to send her a picture of the car when it was finished and also take her for a ride.

The VIN revealed an S-code for the 390 engine, seen here. The very afternoon Deese trailered the Mustang home, he scratched off the points, fed gas to the carburetor (not off the tank because the car had been sitting 15 years), jacked up the back end (since the transmission was pulled and the car had no brakes), and after 20 minutes of fiddling with the 390 it fired right up.
Deese was intrigued to find the original Ford dealer badge on the car. Phil Long Ford is still in business in Colorado Springs, Colorado.