Watch the ONLY Known Video of the Shelby Mustang GT-350’s First Win! 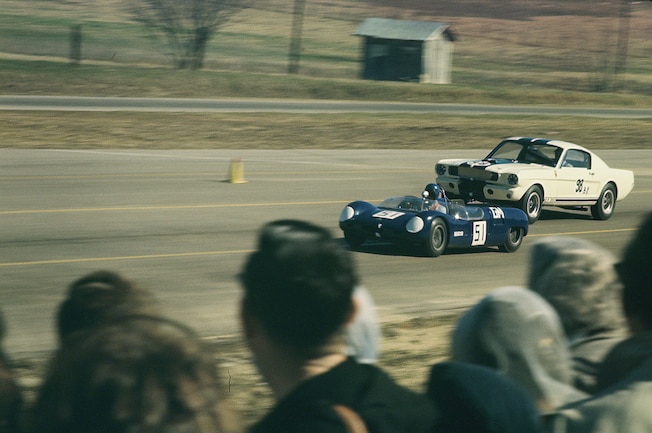 It’s been a little over 50 years since the Shelby Mustang won its first sanctioned race on February 12, 1965 at Green Valley Raceway, just outside of Dallas, Texas. You may not remember this date, or the event, but you will recognize the photos taken that day of driver Ken Miles in his #98 Wimbledon White fastback Shelby airborne with all four wheels off the ground. 50 years ago on this eventful day, Glenn Alford was a young weekend crew chief for a Lotus 7 who couldn't wait to take a few photographs of the amazing race car he had heard about—the Shelby Mustang.

Alford waited until after the Lotus had completed its first race on this cold Sunday morning in February to dash over to the pit area. There he found a group of men including several Shelby employees huddled around the GT-350, serial number 5R002 (5 = 1965, R = race prepped, 002 = Shelby serial number, and second Shelby Mustang produced). He quickly pulled out his camera and snapped off several exposures. That morning, Ken Miles put on a driving lesson. The Green Valley SCCA qualifying heat for B, C and D Production and GM (modified) cars found Miles up against a Merlyn, two Jaguar XKEs, a Triumph TR4 and a Morgan. Both Shelby’s car and driver displayed their racing pedigree, leaving those race fans present something to remember in taking the checkered flag. The Merlyn, driven by Charles Barns, placed second, followed by one of the Jaguar XKEs (3rd) and the Triumph TR4 (4th). These drivers also left the track with something to remember, a story to tell their grandkids one day of how they were beaten by the best Carroll Shelby had to offer.

Ken Miles in the GT-350 about to enter the first long straightaway at Green Valley, in the lead of this BP-CP-DP-CM feature race that would be won by the Merlyn, #51, on Miles’ tail. The Shelby, while finishing 2nd overall, would win the BP class and thus the first win for a GT-350. The #51 in 3rd place in this photo is a BP (B Production class – same class as the GT-350) Jaguar driven by Louis Heuss, the #44 Corvette was driven by G. L. Henderson, and trialing him is another Jaguar (green), #65, driven by James Temme, followed by the red Jaguar, #41, piloted by Dave Dooley. Dave would wreck his Jaguar in this race, and later in the day would compete in Jim Thompson’s ’65 Mustang fastback HiPo. The last car, #9, is a red Lotus S7 driven by M. E. Grove. (Weldon Nash photo)
This was the first frame shot by Glenn Alford that early Sunday morning. Shelby GT 350 crew chief Ron Butler is seen depressing the gas pedal after replacing the oil filter gasket and the portion of oil lost from the failed filter gasket. On the drivers side with the long brown coat and stocking cap is Shelby driver Ken Miles. (Glenn Alford photo)
Ken Miles was one of Carroll Shelby’s most valuable employees, and one of the top drivers in the world. (Weldon Nash photo)

Ten year-old Art Sahlstein and his father were also there, having picked up free tickets to the race from W. O. Waits Ford dealership in Wichita Falls, TX. They sat up in the grandstand, but what set them apart from the rest was the video camera they had brought with them. Art’s father was the only person in attendance known to have filmed the race, in color, and the footage captures the Shelby passing the grandstand on several occasions, with the Merlyn in hot pursuit. Check out that footage here, along with Alford, Sahlstein, and Weldon Nash’s grainy but legit photos of the day. The 5 ½ minute-long video doesn't have any sound but check out the Shelby Mustangs and Cobras, as well as a Corvette and a handful of sporty European iron.

The younger Sahlstein has become a historian of this racing event, and said, “I grew up attending races with my father, and can remember Le Mans in 1962 when I was only 6 years old. The Green Valley races involving the Shelby and the Merlyn—the qualifying and the feature—were the two most exciting races my father and I ever witnessed. Hands down. Ken Miles in the Shelby and Charles Barns in the Merlyn were on each other’s tails the entire day. They just battled back and forth. The Merlyn wasn’t as fast on the straightaways, but could corner better. Ken would pass Charles on the straights, but would get overtaken on a curve.” They swapped the lead an amazing 17 times.

In the fiercely contested feature race, Miles and his R code came in second overall to Barns and his Merlyn, after beating him in the prelim, but more importantly the Shelby team took home the first place trophy in the BP class. It was to be first of many wins to come for an R code in SCCA competition.

This is 5R002 in the pits, with Ken Miles‘ head covered by a gray hood, standing behind a gentleman wearing a red Russ Davis Ford Mustang/Falcon Owners Club jacket. The 12 year-old boy wearing the gray jacket is Peter Miles, Ken’s son, and the red stripes on Jim Thompson’s gray ’65 Mustang HiPo fastback really stand out in this color photo. (Weldon Nash photo)
The GT-350 R code is seen here leading the Merlyn in a preliminary race and approaching the rise in the road where the famous “flying Mustang” photo was taken. Art Sahlstein pointed out that Charles Barns had tape over the drivers side grill only during the prelims, when the air temperature was much cooler than the following events. The Sahlstein’s blue 1963 Fairlane 500 Sports coupe can been seen in the background, and is now in Art’s possession. Several of the trees in this picture enabled Art to locate portions of the old track recently. (Art Sahlstein photo)
This photo is very grainy but nonetheless famous, showing Ken Miles and his GT-350 R code going airborne while about to pass Charles Barns and his Merlyn. Alford said, “Miles would shift into 4th gear, in the air, while leaping over the hump, with no engine whine, grinning from ear to ear. No one else was accelerating over the hump, only Miles. The man was the fastest driver in B production that day, and was obviously utterly confident in his driving abilities. His control of the car was so smooth, effortless. His driving skills really stood out.” (Photographer unknown)
One month prior to the Green Valley, TX race, in January of 1965, Bob Bondurant and Ken Miles track tested the first two 1965 Shelby Mustangs at Willow Springs in California. 5R002 is in background, and 5R001, is in the foreground, with Bondurant looking to his right and his head centered in the car hood, and Miles on his right with the black helmet on. (Bob Bondurant photo)
Our two Green Valley participants and story-tellers as they appear today. Art Sahlstein on the left, and Glenn Alford on the right, in front of 5R002 at the Mid America Tulsa car show in 2014. (Art Sahlstein photo)