It’s not a kit car. It was sold through Ford dealers with a conventional 5.0L Mustang drivetrain. 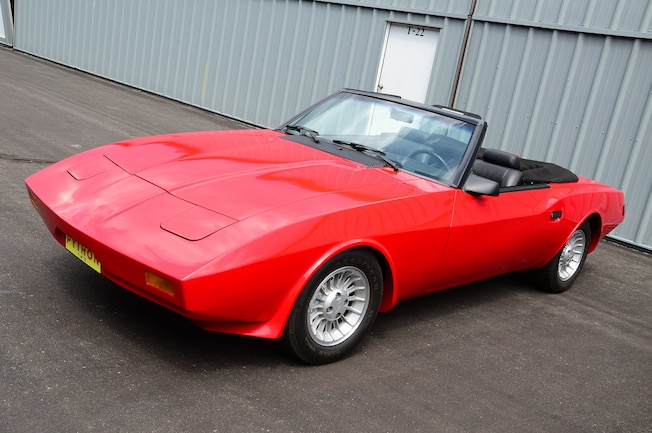 The automotive landscape is littered with broken dreams of car designers, short-lived vehicular visions from the likes of Malcolm Bricklin, John Z. DeLorean, Liz Carmichael—and Alvin A. Kelly. What often goes hand-in-hand with their entrepreneurial efforts is a colorful image and/or backstory. Bricklin’s gullwing doors, DeLorean’s drug-trafficking charges, to name just a couple. As for Kelly, well, his Python ostensibly had a link to Carroll Shelby. (That’s a claim we’ve heard numerous times from a number of wannabe car builders.)

As the story goes, Kelly attempted to capitalize on work done back in the mid-1960s by Eugene Bordinat, a VP of design at Ford, who rendered a replacement for the Shelby Cobra when AC Cars could no longer provide aluminum bodies. Intended as a competitor to the Corvette, the prototypes were to use a new plastic material instead, called Royalex, from the United States Rubber Company (now known as Uniroyal).

This Python is part of a collection of unusual specialty cars owned by vintage racer Wes Abendroth.
The interior is all factory Ford Fox-body, with leather upholstery and a five-speed stick for the 5.0L H.O. V-8.

That project never came to fruition, but in 1981, Kelly came across one of these prototypes, and splashed a mold from it to develop the Python. Quite unlike the curvaceous Cobra, the fiberglass body featured hard-edged, modernized styling with sharp, angular bumpers. Ford factory components included enclosed Probe headlights and Thunderbird taillights.

The chassis was completely different as well, using a Fox-body Mustang frame reinforced with a subframe and modified to move the weight balance farther aft for better handling. Sold through Ford dealers as a turnkey car (not as a kit) with a full warranty, the cars came equipped with a standard Mustang drivetrain and equipment. Options offered by Ford for Mustangs were available, and buyers could also upgrade to a wooden dash and console.

While some 5,000 units were proposed, Alvin “Al” Kelly ultimately produced only 12 dash plaques in all. This one is No. 3, built in 1990.
The tapered shape of the Python was sleek and sort of slinky, trimmed with T-bird taillights, custom rims, and chromed exhaust tips.

While production plans were fairly ambitious, with a goal of 5,000 units, only a dozen were ever built at the factory in Fort Collins, Colorado. Just seven are known to still exist. The model shown here is No. 3, owned by former Corvette dealer Wes Abendroth, who has an eclectic collection of specialty cars. It’s outfitted with a 5.0L Police Interceptor V-8 backed by a five-speed transmission, plus factory headers and a performance handling suspension. The cockpit features a leather interior and an upgraded stereo system.

While Kelly’s Python showed promise in putting the squeeze on Corvette, it was eventually strangled by underfunding. Even so, it offers a tantalizing glimpse of what could have been a popular pony car conversion.

1990-Kelly-python-front-view The wedge-shaped nose is evocative of some concept cars done back in the 1960s.