Ford Racing Readies the New 2015 Mustang S550 for the Strip 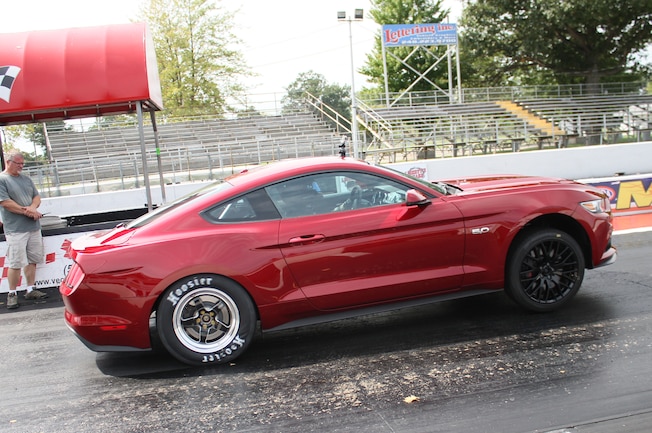 The crew at Ford Racing burned the midnight oil in advance of the official launch of the S550.

They burned up a bunch of rubber, too. While a huge aftermarket no doubt salivates over the introduction of an all-new Mustang, Ford’s in-house performance division wanted to be first out of the gate to demonstrate—and improve upon—the dragstrip capabilities of the pony car’s latest generation. Using a trio of manual-shift, pre-production 2015 coupes—two 5.0L GTs and an EcoBoost 2.3L—Ford Racing Performance Parts got to work last summer testing, tuning, and wrenching. They even set themselves an elapsed-time target for each of the three cars. Testing was done at Milan Dragway, not far from Ford Racing’s headquarters, as well as at U.S. 131 Dragway, in Martin, Michigan.

For the Ingot Silver 2.3L EcoBoost, Ford Racing’s goal was a 12.99-second ET. Yup, right off the bat they targeted a 12-second quarter-mile performance from the feisty little four-banger. Moving to the GTs, Ford Racing’s Ruby Red ’15 coupe would remain in naturally aspirated form and aim for a performance goal of 11.99 seconds. And the second GT, finished in black, would receive the soon-to-be-released Ford Racing/Roush Performance TVS supercharger, with which it was hoped to run a 10.99-second e.t.

While we’ve all been itching to see just what this new S550 is all about, quarter-mile addicts in the crowd have no doubt wondered (worried?) how the Mustang’s now-standard independent rear suspension would respond to a dragstrip’s extreme demands. Early on in their program, Ford Racing engineers took the then-stock prototypes to Milan Dragway to answer that question for themselves. Perhaps not surprisingly, they soon determined that stock IRS rubber bushing compliance contributed to some axle hop under sticky-tire launches. And later, once the supercharged GT test mule topped the 600hp mark, Ford Racing also experienced a stock IRS half-shaft failure.

Luckily, Ford Racing has fixes for both issues, first in the form of aluminum bushings to replace the factory rubber originals in the pumpkin-to-subframe and subframe-to-body interfaces on the IRS. FRPP had also been working with G-Force to develop an upgraded half-shaft kit. The three Ford Racing test coupes were then fitted with these revised bushings and half-shafts, all of which reportedly performed “flawlessly” and should be available through FRPP and its dealers by the time you read this.

This octet of blue anodized aluminum bushing halves is intended to replace factory rubber bushings at the junctions between the S550’s IRS subframe and unibody. This kit carries the FRPP part number M-5872-M.
A second bushing upgrade kit (M-4425-M) eliminates the rubber-induced compliance where the IRS differential pumpkin mounts to the subframe. Like the preceding kit, it is applicable to all S550 Mustangs: I-4, V-6, and V-8.
For those not feeling up to the process of installing these new bushings themselves, a complete replacement subframe (M-5035-M) is also available, pre-fitted with the two bushing kits.
For high-power applications, check out FRPP’s direct-replacement, heavy-duty half-shafts (M-4139-M, left; M-4138-M, right) featuring serviceable CV joints with CNC billet centers, billet one-piece inner and outer stub ends, anti-wheelhop technology, and electrically bonded e-coating. FRPP will also offer a complete kit (M-FR2-M) comprising the half-shafts and aluminum-bushing-equipped subframe.

With that brief introduction to Ford Racing’s rear suspension hardware, let’s look a little closer at each car’s modifications and quarter-mile performance on slicks.

This all-new turbo four is obviously the least familiar occupant of a Mustang engine bay. It may be small, but we all know how well boost can compensate for diminished displacement. Here’s the short list of what it took to post that eye-opening mid-12 pass.

Like FRPP’s pair of GT mules, the four-banger spent time on a chassis dyno to aid development of the race gas calibration. In the EcoBoost’s case, this tuning also had to account for the prototype off-road exhaust system.

Note: This EcoBoost coupe was the only one of the three testers to post time with skinnies up front. The two GTs retained their fat factory front wheels and tires.

The Ruby Red test GT benefitted from Cobra Jet long-tubes and FRPP’s prototype intake system. No photos or details have been released on this intake, but we’ll keep you posted.

Aside from the rear suspension and tire upgrades, pushing the nonpressurized 5.0L into the 11s required nothing much more than a high-octane tune, some matching race gas, and dropping the factory exhaust system in favor of unmuffled Cobra Jet long-tube headers. Oh, and this car also ran with a “prototype intake system” installed. We know that neither the old Boss 302 nor Cobra Jet intakes will fit under a stock S550 hood, so the logical conclusion is that Ford Racing has an S550-specific version under evaluation. Nothing like stating the obvious, right?

While time spent at the strip with prototype S550s hardly sounds like tough duty to most of us, rest assured that, to Ford Racing engineers, this was work. But even they might admit that some workdays are better than others.

FRPP’s supercharged coupe shows pretty good weight transfer at launch. Note the onboard video cameras. In addition to the one above the windshield, there was one mounted behind—and recording the reaction of— each slick.

Ford Racing and Roush Performance have codeveloped a version of Eaton’s TVS Roots-type blower for S550 applications. We don’t have all the details at this point, but look for a CARB-approved kit complete with 91-octane tune very soon. However, this test mule ran on race gas with a prototype off-road exhaust. And note that although FRPP intends to release 91-octane performance tunes for both 5.0L and 2.3L EcoBoost S550 applications, no race gas (off-road) tunes will be offered.

An underhood shot of the black GT shows its S550-specific Roush/FRPP Twin Vortices Series blower. It fits beneath the stock hood.

What Does It All Mean?

From this testing and development program we can draw two really quick conclusions. First, the new Mustang is more than a pretty face. Second, Ford Racing isn’t just a marketing moniker. Stay tuned, as we intend to dive deeper into FRPP’s quickly evolving shopping list of S550 goodies.