1994 Ford Mustang Cobra Pace Car is Breaking All the Rules

Darrell McBryde’s 1994 Cobra Pace Car might be rare, but that hasn’t stopped him from enjoying it to the fullest 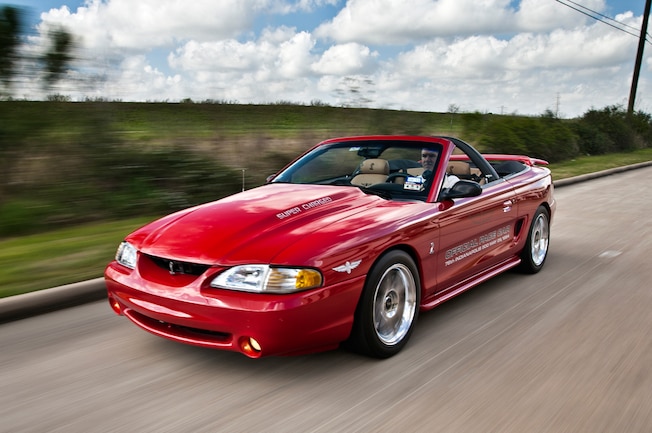 The unspoken rule of the automotive world states that rare cars shouldn’t be driven, and certainly not be modified.

In the name of preserving these rolling rarities, owners are obligated to keep them flawless, keep them stock, and avoid miles like the plague. So what if a rebellious owner ignored the rules, modified his limited-number car, and then drove the wheels off it? Would enthusiasts storm his driveway with pitchforks and torches? Would they condemn said individual to a solitary life sans car shows and gatherings because he committed a cardinal sin?

Darrell McBryde, owner of this modified, high-mileage 1994 Ford Mustang Cobra Indy Pace Car, is all too familiar with ridicule from the purists and praise from the gearheads. He says, “I’ve been called everything from stupid to ignorant by the Pace Car purists, but everyone else loves it.”

Yes, folks, the Cobra before you is number 591 of just 1,000 Cobra Indy Pace Cars produced for 1994, and it’s neither stock nor low mileage. As we’re sure you already know, all 1994 Cobra convertibles were called Pace Cars and they came in any color combo so long as you wanted a Rio Red exterior with Saddle Brown leather interior. The all-new SN95 platform was a big departure from the seasoned Fox-body it replaced, but Ford fans were pleased that the venerable 5.0 still lived under the hood. The Cobra Pace Cars received embroidered seats with the Indy Wings along with special badges and a stack of commemorative stickers thrown in the trunk so that owners could decide if they wanted the full Pace Car ensemble or not.

“The Ford Mustang was selected to be the pace car for the 78th Indianapolis 500 on May 29, 1994, and although Roush converted the actual pace cars to automatics, the 1,000 commemorative units were identical save for their manual transmissions,” McBryde says.

It’s not often you see a Cobra Pace Car outside an automotive museum. They’re rare, but their exclusivity didn’t stop McBryde from turning the blank canvas into his rolling dream machine.

“It was stock with 60,000 miles when I bought it from the original owner in 2000,” he explained. “The minute I bought it, I knew I was going to modify it because Mustangs were meant to be driven and stock cars are boring.”

And drive it he did. The odometer now registers an impressive 147,000 miles of pure pleasure. “I’ve done my best to keep it clean, but any chance I get I drive it. My wife and I have taken it on several 1,200-mile trips to the Mid America Shelby Meet and other Mustang gatherings in the Midwest,” he says.

Yep, that wasn’t a typo, this rare Cobra was used as a daily driver for nearly four years. How do you like them apples? Upset or not, if you measure enjoyment in miles, McBryde would be one of the happiest Mustang owners on the planet.

Speaking of happy, the lightly built motor puts a smile on McBryde’s face every time he hits WOT. He says, “At one point I had a 331 with forged internals, AFR 185 heads, an E-cam, the Vortech blower, and plenty of supporting mods that made 421 hp and 429 lb-ft at the wheels, but it became troublesome for the amount of miles I was driving, so I sold it and went to the current motor.”

The current setup consists of a Vortech V2 SQ-trim blower huffing compressed air into the stock short-block that’s been refreshed with forged pistons while still using the stock crank and rods. Up top, the stock cam works with ported AFR 165 heads that are fed plenty of air by an AFM Power Pipe, a 70mm Professional Products throttle-body, and a Cobra intake manifold that’s had the lower ported by TMoss. Copious amounts of air pairs with plenty of fuel thanks to 30-pound injectors and a Vortech FMU that cooperate with a Pro-M PIH A9L computer conversion and a matching Pro-M 77mm MAF. Other motor mods include a Summit Digital 7 ignition box and FMS ceramic-coated shorty headers that breathe into a catted Bassani midpipe and a MagnaFlow cat-back. Although not quite as powerful as the stroker, the current setup is still throwing down 371 hp and 379 lb-ft at the wheels.

With so many miles behind the wheel, McBryde had enough time to decide what he wanted from the chassis. After careful consideration, he opted for the perfect blend of cornering prowess and ride quality. “I tried several different suspension combos and eventually settled on Eibach Pro Kit springs, KYB adjustable shocks, J&M caster/camber plates, 2003 Cobra A-arms, and polyurethane sway bar bushings,” he explains.

But the urge for more performance is an addictive dance, so in search of a little more speed in the corners he turned to Maximum Motorsports for a set of rear lower control arms and full-length subframe connectors. He says, “I’ve had it up to the Devil’s Backbone with my local club, Northside Mustang Car Club, and it handles really well on the twisty roads.”

SN95 convertibles look great with a drop and some nice wheels, but this Cobra is one better thanks to a Cervini’s Cobra R hood, a Cobra rear bumper, and a CDC light bar. “One of my favorite body mods is the Cobra mural airbrushed under the hood,” McBryde says. “I think it’s a nice touch.”

Life inside the cockpit is equally awesome thanks to custom two-tone seat covers that adorn the Cobra logo in addition to the factory Pace Car Indy Wings. An MGW short shifter is topped with a Hurst T-handle shifter that features a working line lock for simplified smoke shows. A plethora of A-pillar and dash-mounted Auto Meter gauges also displays the engine’s vitals.

When asked why he picked his 1994 Cobra over every other Mustang, McBryde had a simple reply: “I’ve always loved the SN95 body style, I wanted a convertible, and I wanted the pushrod 5.0 motor since they’re easy to work on, so I guess the decision was easy.”

McBryde was never a Mustang guy until he purchased his Cobra, and in the ensuing years he has become more than a diehard Mustang guy. He now bleeds blue. He says, “I ended up getting a Cobra tattoo on my arm to match the Pace Car. Years after buying the ’94, I bought a 2007 Shelby GT500 for my wife and recently bought a 2012 for myself.” Wow, that’s quite the stable!

Before we draw the curtains on this tale, let us make it clear that we don’t dislike garage queens. We understand their vital roll in the preservation of the sport. We do, however, disagree with the purists who’ve ridiculed McBryde for what he’s done with his Cobra. Instead of chastising fellow gearheads because they have a different outlook on the sport, we should celebrate our differences because no matter how different we are, we share the same appreciation for Ford’s finest. And if you ask me, that kind of common ground is anything but common.