2004 Ford Mustang Cobra - The One That Got Away

He dreamt it, he built it, he sold it, and now he regrets it 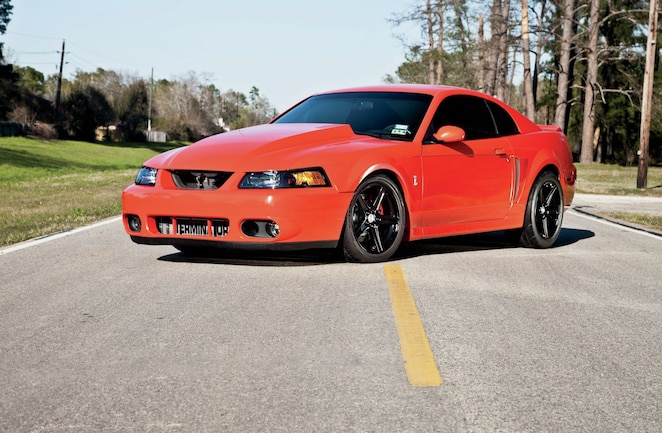 We’ve all got a gut-wrenching story about the one that got away. For Vince Selby, this 2004 Competition Orange Cobra marks both the best and the worst of times. Before we share the heartbreak, we must first delve into the love affair. As they say, the sunny days wouldn’t be special without the rain.

Prior to owning many Mustangs, Selby was an accomplished truck builder who preferred C-notched frames and airbags to horsepower and performance. But it only took one ride in a buddy’s New Edge GT and Selby sold everything to fund his first Mustang—horsepower is addictive like that.

Selby started with a Fox-body and then made his way through several low-mileage Terminators and a Mach 1. But the apple of his eye wasn’t an apple at all, but rather an orange—a Competition Orange Terminator. As you already know, a Comp Orange Cobra isn’t exactly common, as only 353 examples were produced . . . ever. Their rarity didn’t stop him from searching, but it did mean that when he eventually found one, it wasn’t what he had in mind.

“I eventually found a Comp Orange Cobra, but it was far from what I wanted. Instead of a flawless show car, it was a shell of its former self—literally,” Selby explained.

He wasn’t kidding. The previous owner had parted it out in disgust after investing big money to build a single-turbo drag car, only to have the motor grenade on the dyno. The car never made a pass. When the previous owner saw his hard-earned dollars go up in smoke, he sold off the good bits and left the rest for dead.

“It was a shell that didn’t even roll until he installed a junk 8.8-inch solid axle and busted K-member to load it on the trailer,” Selby explained. “There was no interior, wiring, motor, or trans. It was gutted.”

Rare or not, most gearheads wouldn’t touch such a mess with a 10-foot pole, but fueled by determination, Selby seized the opportunity to build the car of his dreams. He said, “I wanted a 600- to 700hp street car boosted by a twin screw, and I wasn’t willing to cut any corners.”

Shortly after bringing home the gutted Cobra, he and his wife headed to Florida for a vacation. Like any proper gearhead, Selby searched ahead only to find Cobra parts just a few towns over from where they’d be vacationing. Hmm, how convenient. Wonder how he explained that one to his better half.

“I found a guy in Florida who had a low-mileage motor, seats, fuel tank and a ton of spare parts, so I took a day off from vacation, rented a U-Haul, and loaded up,” Selby said.

By now you’re probably laughing because you’ve either done the same or the thought has at least crossed your mind. Nonetheless, Selby came home with what he thought was a low-mileage Terminator motor.

“The guy told me it had under 40,000 miles,” said Selby, “but when we opened it to check the condition, we realized it was a new crate motor from Ford Racing and it still had the break-in oil.”

When he returned from vacation, he embarked on a nine-month journey that brought the rare steed back from the grave. Every waking moment not at work was spent rebuilding the beast.

The fresh crate engine was left untouched from oil pan to valve covers, but a Kenne Bell 2.2 blower joined the party, along with plenty of other supporting mods, like a combo of Billetflow and Metco pulleys spec’d for 20-plus psi of boost. A BBK twin 65mm throttle body along with a JLT High Boost CAI and an SCT BA3000 MAF handled inlet duties, while cooling was left to the LFP dual-pass heat exchanger and Moroso coolant tank. All that air needs plenty of fuel, so a Glenn’s Performance Sleeper–sumped fuel tank joined the party, as did a MagnaFuel 750 fuel pump controlled by an Aeromotive fuel-pressure regulator and fed by massive steel braided AN-10 and -8 feed/return lines that supply massive 80-pound injectors. Other underhood goodies include plenty of powdercoated, painted, and polished bits as well as a relocated battery for a tidy look.

Few cars sound as wicked as a 4V Modular, and this Terminator is no exception thanks to Kooks long tubes and matching X-pipe that feed into Borla Stingers.

Power is nothing without control, so Selby spec’d an all-star cast of driveline components to support the big-boost motor. Like a D&D-built Tremec T56 transmission with a Pro 5.0 shifter that dances with a SPEC Stage 3+ clutch and matching lightweight aluminum flywheel.

Power leaves the built transmission and travels down an aluminum driveshaft into a solid-axle swap that utilizes a built 8.8-inch rearend that’s also had the front braced and the axletubes welded. Inside the rearend you’ll find 31-spline axles that tickle a Detroit Locker differential with C-clip eliminators and 3.73 gears—a GT500 differential cover seals the deal.

Terminators aren’t the lightest cars on the street, so Selby cut weight wherever possible. He said, “I added a Team Z Motorsports K-member and tubular A-arms along with a Steeda bumpsteer kit and UPR front coilovers with H&R springs to drop weight off the front end.”

The effective motor, drivetrain, and suspension mods might be hard to spot, but the classic 18-inch Saleen Replica wheels dressed in black and wrapped in BFGoodrich front and Mickey Thompson rear tires look sinister against the pumpkin-orange paint. Harder to spot are such subtleties as that smoked taillights, which are also sequentially wired like the newer Mustangs, and the drilled and slotted rotors that hide beneath the big rims.

Speaking of hiding, you won’t mind hiding from the elements in the cozy cockpit thanks to modified OEM Cobra seats with suede inserts that look great against the orange accents, the custom roll bar, and the plethora of gauges.

When all was said and done, Selby had finally created the car of his dreams, but it was short-lived. Remember we talked about heartbreak? Well, just months after completing the build, responsibility came a-knocking.

“My wife and I wanted to buy a house, and even though I said I’d never sell it, I did. To this day, I still regret it.” said Selby.

Months passed and the nagging reality of letting go of his precious pony sank in. Selby managed to track his beloved Cobra down again, except its whereabouts were anything but typical.

“A broker bought it and sold it to a collector in Europe who was only willing to part with it for a lot of money,” said Selby.

And so while Selby remains without his Comp Orange Cobra, he’ll forever have the memories of building it.

“I regret selling it, but I don’t regret building it. I miss it, but I’m not losing hope of building another, except this time it’s going to be a Terminator swapped Fox-body.”

Will it be Competition Orange? We think so.