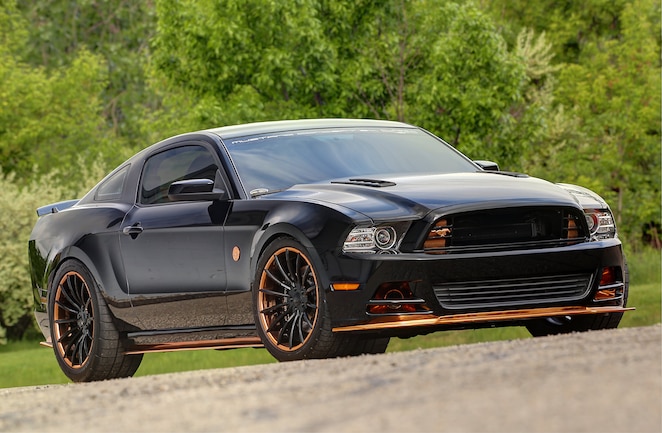 Year after year, serious players in the automotive aftermarket inundate Detroit’s Big Three automakers with requests for vehicles to modify and mutate into what are essentially rolling business cards intended to capture media and market attention during November’s huge Specialty Equipment Market Association (SEMA) convention in Las Vegas. Many such proposals are submitted, very few are approved, meaning that getting a manufacturer’s cooperation to build a “SEMA car” is quite a feat. Despite that OEM pickiness—or more likely because of it—Classic Design Concepts (CDC) has proposed and built a veritable fleet of such SEMA projects, with the majority being Mustangs. In the process, the Michigan firm has gained wide recognition in the form of multiple magazine spreads and a display case full of design awards for its build efforts, the most recent of which is its “Bad Penny” coupe laid out before you.

It began last October, when the crew at CDC got the unexpected opportunity to do this particular SEMA Mustang build—unexpected because they really hadn’t proposed one. Flattering for sure, but there were two problems facing the CDC team: First, the ’14 Mustang GT in question was black—not the ideal hue to compete amongst the often eye-searing custom finishes on display at SEMA—and there wasn’t time or budget for a full-on re-spray. Which brings us to the second problem, one that was even more daunting as SEMA 2013 was then just over two weeks away, a near-impossibly short time frame in which to design, build, and ship a show-quality concept. Still, as you can see, CDC was up to the challenge.

Given those restraints, CDC boss George Huisman quickly came up with a project scheme that would retain the GT’s factory black finish, but accent it with a strikingly unusual but complementary copper hue. And, when you think of copper, you can’t help but think of pennies—thus the Bad Penny name and overall theme quickly evolved. Then the CDC team had to find someone who could apply a realistic, reflective copper finish to composite parts, leading them to DHC Customz, in Yoder, Indiana. DHC utilizes a water-based system known as Cosmichrome which, by way of a shorthand description, requires spraying on a chrome layer, then topping it with a semi-transparent (like a candy color) topcoat. In this case, that topcoat was custom blended to suit CDC’s penny-like needs. Huisman hand delivered the parts needing refinishing, and DHC worked its Cosmichrome magic within the tight deadline.

Many SEMA cars can be more than a bit over-the-top, with outlandish $15,000 paint and/or wrap jobs and ride height so slammed that driveway ramps or even misaligned manhole covers pose a mortal threat—should that show car ever see the street, that is. Not so with the Bad Penny coupe which, thanks to some seat time during our photo-shoot, we can smilingly confirm is every bit as happy ripping around Detroit’s notoriously potholed streets and freeways as it was while basking under the lights of SEMA’s humongous show floor in Nevada.

As a promotional project, the Bad Penny was, let’s say, minted with many of CDC’s own exterior enhancements specific to the ’13/’14 models, with some getting that distinctive copper coating. Probably most obvious up front is CDC’s wide-open performance upper grille, in this case accented with copper pony and mesh inserts. Beneath that are the company’s chin splitter and brake ducts, while their rocker and rear-quarter splitters dress up those glossy black flanks. Also obvious in profile view are Forgiato F2.15 three-piece 20-inch rims (custom sprayed in black with copper hoops). These forged lightweights have widths of 9.5 inches up front and 11 inches out back, and are mounted with BFGoodrich’s latest g-Force Rival skins, in P285/35ZR20 and P315/35ZR20 dimensions, respectively. The super slim spokes of the Forgiatos also help show off all 14 inches of Wilwood’s aptly named Big Brake Kit. CDC’s bespoke product list continues out back with their rear spoiler, between-the-taillight filler panel, and copper-meshed license surround panel. And the coupe’s theme is reflected in the coin-mimicking fender badges with the words: “Bad Penny—In God We Trust; All Others Pay Cash” surrounding a running pony. These medallions are nicely repeated in the steering wheel hub and on the inner door panels.

Those door panels, like the Ford Racing Recaro buckets and some of the trim around FRPP’s Boss 302-style rear seat delete and brace, are accented with copper-color Alcantara inserts. Tucked behind the X-brace are red-illuminated KX amplifiers that form part of an overall Kicker audio system. The trunk houses a pair of Solo-Baric L7 subs (also surrounded in Alcantara, with a Bad Penny medallion), while mid-frequency KS drivers are tucked in the door panels. Up on the dash is Ford Racing’s three-gauge pod, and a really trick piece on the console is CDC’s new connectivity mount for iPhone 5—just slide your phone in and it connects via Bluetooth.

Underhood, the Ford Racing/Whipple (624hp variant) twin-screw supercharger is easily seen. Not so with the set of Pypes long-tube headers hidden beneath those fat DOHC heads. The coupe practically has to be up on a hoist before you can eyeball the headers, but you can sure hear ’em as they send combustion by-products downstream to the MagnaFlow exhaust system’s 3-inch pipes and quad black 4-inch tips. We continue to be amazed at how well the 5.0L Coyote responds to moderate amounts of boost. Even with the fat and sticky 315 skins at the stern, Ford’s electronic traction control has to work overtime on CDC’s Bad Penny. It would have been a shame if this thing had remained “just” a show car, but there was little chance of that since CDC simply won’t build a SEMA project to remain stationary.

In that regard, handling and stance weren’t forgotten either, with Ford Racing’s extremely well-sorted Handling Pack (M-FR3A-MGTA) onboard to banish body roll and lower ride height by an inch—all while still retaining a comfortable ride even on Detroit’s frost-cratered pavement. And in one further chassis upgrade, the Bad Penny’s Panhard bar is replaced by a more precise Watt’s link (with adjustable roll center), from Australia’s Whiteline. All said and done, we’d love to sample CDC’s showy, yet practical and highly capable, Bad Penny GT on a winding, high-speed road course, something that can’t always be said about a show car. But that’s just our two cents’ worth.