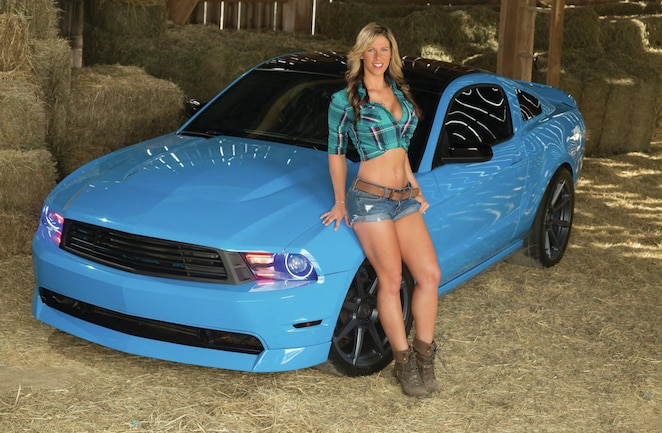 Krista Elyse is way more than your average Mustang girl.

Of course, we don’t think all Mustang girls are average, but not all of have been killin’ it within the auto industry, not only as a motorsports model but also as a television hostess, radio personality, and NMRA drag racer.

Entering the Mustang hobby years ago with a Paxton-supercharged ’00 Mustang GT, Krista, radio personality for Heels on Wheels and In the Pits Media, is no stranger to the Mustang or racing world. Krista and her father have been racing NMRA True Street together since 2011.

“Dad and I have made a deal to run NMRA True Street together every year since he was the one who I am indebted to for introducing me to racing and motorsports, “ Krista tells us. “We’ve both been diehard Mustang lovers our entire lives.”

After selling the ’00 back in 2008 and briefly trying out the GM side of things, she grabbed the reins to a brand new ’10 Grabber Blue Mustang. “It started off as a tribute to my dad’s first Mustang, a 1970 Grabber Blue fastback,” Krista tells us.

With the help of Justin’s Performance Center (JPC) out of Millersville, Maryland, Krista has converted a stock GT in a proud Pony that is now raising awareness for a cause that is near and dear to her heart—autism—and blue just happens to be the color for autism awareness.

“When I found out a few years ago that my nephew was diagnosed with Autism Spectrum Disorder, my car choice seemed even more fitting,” Krista says. “Not only did I chose this color because of family ties, but it continues to be even more meaningful in my efforts to support the largest autism awareness organization in the world, Autism Speaks. I decided to dedicate my build to my nephew Ben because my Grabber Blue Mustang has always been his favorite car.”

Blue is powered by a built 4.6L short-block by Mustang Performance Racing (MPR) complete with a Paxton Novi 2000 supercharger with Tial Q-series 50mm blow-off valve and a Paxton air-to-air aftercooler.

Accompanying the Three-Valve short-block are CNC-machined, ported RGR Stage 1 heads, Comp Stage 2 Blower camshafts, and Ferrara stainless valves, a custom RGR valve job, and upgraded valve springs. It’s all tied together with a tune from JPC, bumping the car to 606 rwhp and about 550 lb-ft of torque.

“I wanted to prove that it was possible to make a Three-Valve just as competitive as a new 5.0,” says Krista. We think she has done a fine job. Krista added exterior mods such as a Classic Design Concepts chin spoiler modified to fit over the intercooler, and a 3D Carbon 3d500 rear spoiler. All lower plastic pieces were painted by Signature Finishes LLC of Pasadena, Maryland. Other cosmetic modifications include shaved antenna and badges, tinted taillights and marker lights, a painted Sirius receiver, a custom-painted rear decklid, black roof and mirrors, and a Saleen grille.

One of the first things to stand out on Blue are the custom headlights. Joe from 3J’s Auto & Customs worked closely with Oracle Lighting to build a custom set of Halo HID headlights that light up blue to fit the autism awareness theme.

Krista has been a familiar face on the NMRA trail and has some serious upcoming plans. “I am confident in my driving abilities and actually have gotten the opportunity to run an additional vehicle, a Ford Ranger, in Truck and Lightning class for 2015. I’d like to pursue my NHRA or IHRA license within the next few years.”

Krista’s best pass in Blue came in 11.4 seconds at 126 mph on Nitto 555R tires, but future plans involve pushing the Mustang into the 10-second range. “I want to thank my dad for introducing me to drag racing, Mustangs, and motorsports. I wouldn’t be anywhere if it wasn’t for him, plus my sister and nephew, and my husband, Charlie. Charlie deserves so much credit and gratitude. A big thank-you also goes to BBR, who helped me get my motor all the way to Maryland from south Florida. Also, JPC Racing for completing the build in time for our first show and for working so hard to make sure everything was just right and exactly the way I wanted.”

Krista has made quite a name for herself within the auto industry, and soon you may see her make a television appearance on the Velocity Challenge during the Ultimate Tuner Challenge. Good luck, Krista!