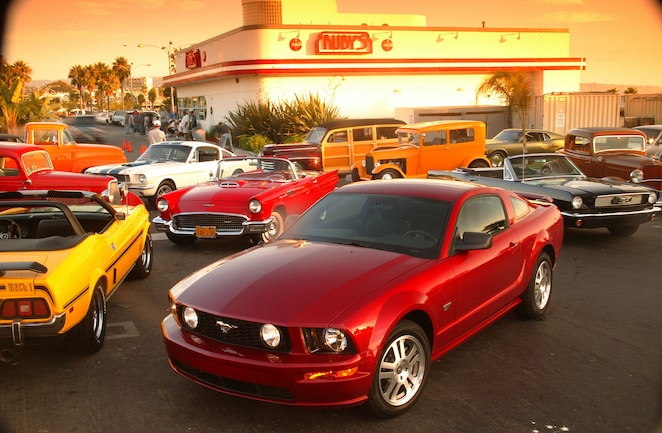 The nine-years of S197 production may have been the greatest era in Mustang history. From ’05 to ’14, Ford produced some of the best, most powerful Mustangs ever. Technology took over, starting with 300 horsepower from a three-valve 4.6-liter modular in ’05 and ending up with 420 horsepower from a new, high-tech DOHC “Coyote” 5.0-liter. More amazingly, SVT closed out the era with a 662-horsepower Shelby GT 500 that avoided the gas-guzzler tax by sipping 25 miles-per-gallon on the highway!

The S197 era started like most others with a fresh makeover. However, the ’05 Mustang was constructed on a much stronger, stiffer platform, eliminating much of the cowl-shake of the previous generation, especially in convertibles, and providing a more stable chassis for improved handling. It provided a foundation for the Mustangs to come over the next nine years.

For the new-generation ’05 Mustang, Ford’s modern DEW98 platform, as used for the Lincoln LS, was changed so much that it received its own code name—S197. The modified chassis doubled the torsional stiffness over the previous Fox-4 Mustangs to improve handling and eliminate flexing.

Production of the ’05 Mustang moved to the state-of-the-art AutoAlliance International assembly plant in Flat Rock, Michigan, south of Dearborn. Using AAI’s flexible system, Mustang bodies were built on separate assembly lines with the Mazda6, with final assembly taking place on the same lines.

As with every other new generation of Mustang, Ford teased the public about the upcoming change with a concept preview. For the S197, Ford introduced a pair of Mustang GT concepts, a coupe and a convertible, at the 2003 North American International Auto Show. Both showed strong hints of the ’05 Mustang’s styling.

As part of the ’05 Mustang’s introduction, Ford returned to the site of the New York World’s Fair, where the ’65 Mustang made its debut in 1964. Recently named Mustang chief engineer Hau Thai-Tang, left, joined members of the Mustang and Shelby Club of Long Island, including club president Perry Los Kamp and his special-order ’64½ convertible, to show off the latest Mustang.

Team Mustang introduced the ’05 coupe first, delaying the debut of the convertible until the spring of 2005. It was worth the wait with a smoother top-down look and much stronger underpinnings that eliminated the previous model’s cowl shake.

Saleen Steps It Up

Leave it up to Steve Saleen to take an already awesome Mustang and make it better. For the ’05 S281, Saleen replaced the front and rear fascias for a more unique look. For the SC model, Saleen created its own supercharger for the three-valve 4.6-liter, incorporating the intake manifold, blower housing, and intercooler into one compact unit.

The huge rear wing was a deal give-away to the GT-R concept’s intentions. With the Mustang entering a new era of road racing, the GT-R provided a glimpse of what road racers could expect in the future, including the new “Cammer” 5.0-liter engine. The GT-R set the stage for Mustangs to come, including Ford Racing’s FR500 and the production ’12-’13 Boss 302.

By the mid-2000s, it was time for the Mustang to join the newest form of automotive competition. By recruiting Ken Gushi, Ford put the Mustang into good hands with a well-known and experienced driver. Gushi’s Ford Racing-backed ’05 Mustang finished third in the Formula Drift 2005 championship.

Former Ford designer Larry Shinoda, who created the Boss name for the ’69-’70 Mustang and penned the bold stripes, resurfaced in the Mustang world in ’05 with his Boss Shinoda Mustang. Once again, the stripes grabbed the attention.

It was a beautiful sight as black and gold Shelby GT-H Mustangs were loaded onto trailers for delivery to Hertz Rental Car facilities across the country. Yes, Shelby was back in the Mustang business for ’06, taking new Mustang GTs and upfitting them with engine, suspension, and body modifications—just like the 1960s—for transformation into genuine Shelbys at the Shelby Automobiles factory in Las Vegas. With the GT-H program, Shelby revived the Hertz program from ’66.

Apparently, the rumors about Carroll Shelby roaming the halls of Ford were true. At the 2005 New York International Auto Show, Shelby and Ford vice-president of product creation Phil Marstens introduced the Shelby Cobra GT 500 show car, which turned out to be an accurate prediction of the SVT Shelby GT 500 that arrived in showrooms for ’07. It was the “restart” of something big for Shelby and Ford.

A Special for California

Thanks to the S197’s classic looks, Ford was quick to revive names from the past, like the ’07 GT/CS “California Special” that mimicked a special edition that was produced in 1968 for the western U.S. market.

Enthusiasts eagerly anticipated the next Cobra model based on the S197 Mustang. However, with Ford and Shelby back together again, SVT replaced the Cobra with the ’07 Shelby GT 500. And it was the best Mustang yet from the Special Vehicle Team. Powered by a supercharged 32-valve 5.4-liter with 500 horsepower and improved in every area, the new GT 500 recaptured the Shelby spirit of the 1960s.

A road racer himself, Steve Saleen honored one of his predecessors, Trans-Am champion Parnelli Jones, with a special ’07 Saleen Parnelli Jones Limited Edition Mustang. Painted and striped to match Jones’ Trans-Am winning ’70 Boss 302, the Saleen PJ model was powered by a 5.0-liter (302 cubic-inch) modular engine. Production was limited to 500 cars.

Team Mustang played the Steve McQueen card one more time for ’08 with the second edition of the Bullitt GT. Available in Highland Green (like McQueen’s ’68 fastback from the 1968 movie Bullitt) or black, the limited-edition Bullitt featured a unique exhaust system to replicate the movie sound-track, upgraded engine calibration, Bullitt wheels, and special trim.

King of the Road, Round Two

The vintage hits just kept on coming for ’08. At Shelby Automobiles, Shelby GT 500s were upgraded to GT 500KRs—for “King of the Road,” just like ’68 —with a carbon-fiber dual-scoop hood, special engine tuning for 540 horsepower, 3.73 gearing, and Le Mans stripes. Unlike the post-title GT 500 Super Snakes, the GT 500KRs were built at Shelby Automobiles and then sold through Ford dealers.

Ford freshened the S197 Mustang for ’10 with a new, sleeker front end and angled taillights, plus another 15 horsepower for the GT using the tricks from the ’08 Bullitt program.

One year after the ’10’s styling update, no one expected such a radical change to the Mustang drivetrain offerings for ’11. For the GT, a brand-new “Coyote” 5.0-liter generated 412 horsepower (later upgraded to 420). Just as surprising, the base V-6 was overhauled to produce 305 horsepower (same as the ’96 Cobra!) and 31 miles-per-gallon fuel economy.

Yet another iconic Mustang name from the past made a comeback when newly renamed Shelby American introduced—or reintroduced—the GT 350. Like the original from ’65, the ’11 model was available only in white with blue stripes. A unique center-exit exhaust system gave the newest GT 350 a raspy note from its 450-horspower 5.0-liter engine, with 525 horsepower available from optional supercharging.

Boss is Really Back

Finally, after several years of debating the right time to bring back the Boss name, Ford had the right Mustang powered by the right 302 cubic-inch engine. Like the original Boss 302 from ’69-’70, the ’12 Boss 302 was created for track duty with a special suspension and a naturally aspirated 5.0-liter that made 444 horsepower. For road-racing enthusiasts, a Laguna Seca model with red stripes and accents stepped up the capabilities with special rear-seat bracing (and the rear seat deleted) and a wild front splitter. The Boss 302 was a two-year program, just like ’69-’70, with the ’13 getting hockey-stick stripes like the ’70 model.

Dave Pericak took over the Mustang chief engineer job at just the right time. With a new 5.0-liter GT to work with, Pericak spearheaded the Boss 302 program to production and oversaw the development of the new ’15 Mustang. Not a bad gig if you can get it.

The S197 era ended on a high note with SVT’s introduction of the ’13 Shelby GT 500, a 662-horsepower monster that puttered along at freeway speeds to the tune of 25 miles-per-gallon. Combining all of the technology gains of the previous eight years, the ’13-’14 GT 500 closed out the latest generation with a high-powered bang.

Shelby Automobiles president Amy Boylan got the wheels turning with the ’06 Shelby GT-H program. The following year, Ford SVT revealed the ’07 Shelby GT 500, and all of a sudden Carroll Shelby was back in the Mustang spotlight with Shelby GTs, similar to the previous year’s GT-H, and GT 500 Super Snakes rolling out the back door of the Shelby Automobiles complex near Las Vegas Motor Speedway. For most of 2007, new Mustang GTs in black and white were staged across the road from the Shelby buildings awaiting their turn on the lifts for transformation into Shelby GTs. To build Super Snakes, owners of new Shelby GT 500s shipped or delivered their cars to Las Vegas for the upgrade to better handling, looks, and up to 725 horsepower.