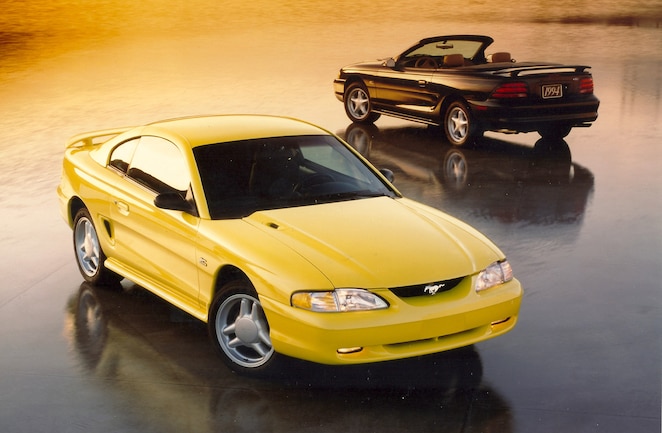 We almost lost the Mustang in the 1990s. Or at least the Mustang as we had known it for three decades. Within Ford, the wheels were in motion to replace the rear-wheel-drive Mustang with a car based on the front-wheel-drive 626 from Mazda, which was partially owned by Ford. As word leaked out, Mustang enthusiasts rebelled by responding to a Mustang Monthly editorial that suggested readers write to Ford president Donald Petersen (see sidebar).

The letters convinced Ford to rethink its decision, and an executive named John Coletti spearheaded a Team Mustang movement to revamp the Fox-body into a new retrostyled Mustang that was embraced by both older and younger enthusiasts alike. From ’94-’04, the Fox-4 Mustang kept the legend alive with great models like Terminator Cobras, Bullitt GTs, and Mach 1s.

In the mid-1980s, some within Ford felt that the next generation Mustang should compete against the onslaught of Japanese cars that were selling well in the U.S. However, after enthusiasts voiced their objections about plans for a front-wheel-drive Mustang (see “The Write-In Campaign” sidebar), Ford reconsidered and enlisted John Coletti to lead a new Team Mustang to keep the rear-wheel-drive Mustang alive. The front-wheel-drive program continued and eventually became the ’89 Probe, a car line that survived only seven years. It was discontinued after 1997.

As Mustang enthusiasts voiced their concerns about a front-wheel-drive Mustang based on a Mazda platform, Ford executive vice-president Alex Trotman initiated a program to save the Mustang in its traditional rear-wheel-drive configuration. He asked design manager John Coletti to lead the effort, resulting in the Team Mustang skunkworks effort that led to the successful launch of the re-engineered and retro-styled ’94 Mustang.

The ’94 Mustang, code-named SN-95, arrived in Ford showrooms in October 1993 as a base V-6 or GT with the 5.0-liter V-8. The old Fox platform was changed and stiffened so much that it is often called the “Fox-4.” For styling, the ’94 Mustang abandoned the European look of the ’79-’93 Mustangs and reverted to a more traditional appearance with a large grille opening, side scoop sculpturing, and tri-bar taillights.

To tease the public about the upcoming ’94 Mustang and to upstage the new Camaro’s debut at the 1993 Detroit Auto Show, John Coletti asked his team to come up with a Mustang supercar concept. The Mach III not only wowed auto show attendees, the hardly subtle prototype garnered plenty of press coverage as it provided hints to the Mustang’s future.

Car of the Year

For the second time in its storied history, the Mustang received Motor Trend’s “Car of the Year” award for the new ’94 model. Motor Trend publisher Lee Kelley (seated in car at the left) presented the award to Mustang program manager Mike Zevalkink with other Team Mustang members, including John Coletti at extreme left, gathered around for the photo op.

A street-racer at heart, John Coletti was never one to back down from a challenge, especially when it came to the competition from Chevrolet. When he heard about a Camaro ZL-1 concept car with a 750-horsepower big-block Chevy engine, Coletti countered with an SN-95 Mustang built by Roush with a supercharged 604 cubic-inch Boss 429. Former Ford designer Larry Shinoda, who created the original Boss 302 name and stripes, penned the graphics for Coletti’s modern Boss.

The mid-’94 introduction of the SVT Cobra gave enthusiasts a 240-horsepower version of the 5.0-liter, improved suspension, and an upgraded interior. The convertible model was chosen as the second Mustang to pace the Indianapolis 500, with replicas offered to the public.

The newly formed Special Vehicle Team, headed by John Coletti, produced one of the best Mustangs of the SN-95 era with the ’95 Cobra R, a 351-powered coupe aimed squarely at grassroots racers in SCCA World Challenge and IMSA Grand Sport. Some were bought by racers; most found homes in the garages of collectors.

Mustang performance enthusiasts loved the 5.0-liter Mustang but craved the torque and power available from the larger 351 V-8. Steve Saleen gave it to them in the form of the Saleen S351, a Mustang that was especially potent as the S351SR—for “Supercharged Racer.”

For ’96, the pushrod small-block’s three-decade reign as the Mustang’s most popular engine came to an end with the introduction of the modern 4.6-liter SOHC and DOHC engines. Known as “mod motors” for the modular way the assembly plant could be configured for different engine assembly within the same family, the SOHC powered the GT while the more powerful dual overhead cam version was reserved for the Cobra.

With a new high-revving 305-horsepower DOHC modular engine under the hood, SVT’s ’96 Cobra raised eyebrows as the best all-around Mustang to date.

In 1987, I had returned to Mustang Monthly just as word was leaking from Dearborn that Ford planned to replace the Fox-body Mustang with a front-wheel-drive derivative of the Mazda 626. In the April 1987 issue, we published a letter from reader Michael Perih, who suggested a write-in “No Japanese Mustang” campaign urging Ford to rethink its plans. Needing an editorial for the July 1987 issue, I expanded on Perih’s idea:

“As much as I try to rationalize the whole deal (ordeal?) and attempt to bring my thought processes into the 1980s and beyond, I just can’t force myself to accept Ford’s intended future for the Mustang. Call me old fashioned or sentimental or just plain stubborn, but a Japanese car, even one built in America, is a Japanese car and I’m not prepared to see a Mazda with the Mustang name and running horse emblems affixed to its fenders. The name ‘Mustang’ is as American as hot dogs, apple pie, and rear-wheel-drive, having come from a small, spirited horse found on the western plains.”

From there, I recalled the 1968 Hot Rod magazine write-in campaign to Ford that resulted in the 428 Cobra Jet engine, and suggested a similar Mustang Monthly reader uproar in an attempt to squelch the idea of a front-wheel-drive Mustang. I even provided Ford president Donald Petersen’s address. Years later, Ford reported that some 30,000 letters and postcards arrived at World Headquarters, convincing the company to rethink its intentions and launch the program that would become the SN-95 Mustang for ’94. Rear-wheel-drive, of course. –Donald Farr

John Coletti had moved on from Team Mustang to head up SVT, but he wasn’t done with Mustang concepts. SVT’s Super Stallion boasted an independent rear suspension, a wild paint job, and a supercharged 5.4-liter engine that ran on gasoline, alcohol, or a combination of the two. “This is the ultimate street Mustang,” said Coletti. “You wouldn’t want anything else ’cause there’s really nothing else to want.”

By 1999, Ford was keenly aware of the Mustang’s iconic status and commemorated the model’s 35th anniversary with a special limited edition GT offered in Performance Red, black, silver, and white. As the hero card stated, “Thirty-five years young, and still leading the herd!”

After successful runs with ’93 and ’95 models, SVT saved the best R for last with the ’00 Cobra R. This time, the R-model got its own engine, a 5.4-liter DOHC tweaked to 385 horsepower, making it the fastest R of all. Side exhaust and a unique rear wing provided the ’00 Cobra R with its “boy racer” look.

Art of the Mustang

Perhaps no other chief engineer did more for the Mustang than Art Hyde. During his time at Team Mustang, Hyde was involved with the creation of the ’01 Bullitt and ’03-’04 Mach 1 while overseeing the development of the next-generation S197 Mustang at the same time. A true “car guy,” Hyde gave back to the Mustang community by serving on the Mustang Club of America’s board of directors. He was later inducted into the MCA’s Mustang Hall of Fame.

Playing off the continuing popularity of Steve McQueen’s 1968 movie “Bullitt” and its starring ’68 Mustang fastback, Team Mustang developed a Bullitt GT special edition for the ’01 model year and brought in McQueen’s son, Chad, for the promotional photos on the hills of San Francisco. Although offered in three colors, most were painted Highland Green like McQueen’s movie fastback.

SVT closed out the Fox-body generation with the best Cobra yet. Nicknamed “The Terminator,” the ’03-’04 Cobra added supercharging to the 4.6-liter DOHC powerplant for 390 horsepower, once again a high-water mark for a production Mustang.

Like the ’01 Bullitt, Team Mustang once again looked to the past to create its latest special edition as the Fox-body era came to a close. Realizing that the Shaker hood scoop from ’69-’70 had been one of the Mustang’s most iconic options, Team Mustang’s customization engineer Scott Hoag adapted a functional reproduction of the original scoop to the naturally-aspirated 4.6-liter DOHC, which gave credence to the new model’s old name—Mach 1.

A new Mystichrome Appearance Package made news for the ’04 Cobra. Using DuPont’s color-shifting paint, the Mystichrome Cobra was green from one angle, blue from another, or a purplish mixture of both. The new paint technology even found its way to the seats.

Ford commemorated four decades of Mustang with a 40th Anniversary special edition for ’04. Gold stripes on three different colors, including a unique Crimson Red, set it apart from other Mustang GTs.

Ford closed out two chapters of Mustang history when the final ’04 rolled off of the Dearborn assembly line on May 10, 2004. Since 1964, Mustangs had been built in the old Dearborn Assembly Plant, but the venerable old facility was scheduled for renovation to build F-series trucks, with Mustang production moving to the modern AutoAlliance Assembly Plant (now simply called the Flat Rock Assembly Plant) in nearby Flat Rock, Michigan.

With Coletti in charge, SVT continued to take the Cobra to new levels of performance. Horsepower for the New Edge ’99 Cobra increased from 305 to 320, but the real boost came from the new independent rear suspension, a first for Mustang and something to quiet the auto magazine writers who had been criticizing the Mustang’s solid rear axle for years. The IRS not only provided better handling, it gave the Cobra a smoother, less jittery ride, once again setting a new standard for a performance Mustang.