Mustang returns to its former glory with the Fox-body and a revised 302 cubic-inch small-block called the 5.0 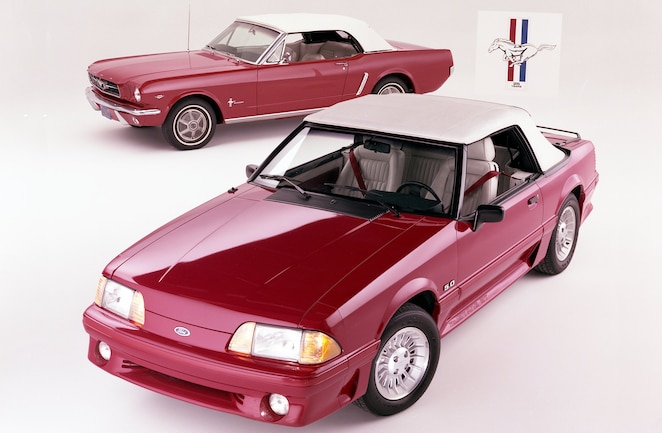 By the early 1970s, Ford knew it had to update the Mustang for the next decade by utilizing lighter materials, smaller engines, and improved aerodynamics, all for the sake of increased fuel mileage and fewer emissions. Ford’s new world car platform, code-named “Fox,” would provide the foundation for a series of new Fords, including the next Mustang.

The Mustang’s ’79-’93 Fox era started quietly. A ’79 Pace Car edition provided a glimmer of hope. Then the floodgates started opening in ’82 with the debut of the 5.0-liter HO, an engine that was especially well-suited for the also-new GT. From there, the 5.0 gained steam—from 157 horsepower in ’82, to 175 horsepower with a four-barrel in ’83, finally topping out at 225 horsepower with fuel-injection from ’87-’93. Lightweight and inexpensive, the 5.0-liter Mustang revived the Mustang legend for a new generation of enthusiasts.

When Jack Telnack returned from Europe to take over as Ford’s executive director of light car and truck design in 1976, he was not pleased with the styling studio’s boxy designs, which looked too much like the Fox-based four-door Fairmont. Utilizing the aerodynamic tricks learned in Europe, Telnack oversaw the creation of a more European Mustang with a slanted nose and lower hood. The Telnack-influenced ’79 Mustang would set the stage for one of the greatest eras in Mustang history.

Ready to Strike—Well, sort of

The Cobra model continued on the Fox-body (but without the “II”) as the top-of-the-line performance Mustang. Unfortunately, like its predecessor Cobra II, the power under the hood did not support the optional Cobra hood decal.

Like the original ’65 Mustang, the all-new ’79 Mustang was chosen as the pace car for the Indianapolis 500. Finally, after five years of Mustang IIs, enthusiasts had something to talk about when the Pace Car replica arrived with a front air dam and rear spoiler, hood scoop, TRX suspension, Recaro seats, and a Pewter Silver paint job with orange/red/black graphics. Powered by a turbocharged four-cylinder or 302 V-8, the Pace Car was not overwhelming in terms of power, but the appearance package set the stage for Mustangs to come.

Getting a Handle on Performance

Motor Trend reached into the Mustang’s past to describe the late-addition ’82 Mustang GT. Although available with all Mustang engines, the revived GT model, absent from the Mustang since 1969, stirred the souls of enthusiasts when equipped with the new 5.0-liter HO, a 157-horsepower small-block with a 351 camshaft, improved cylinder heads, and a two-barrel carburetor with an aluminum intake and dual-snorkel air cleaner. Motor Trend testing resulted in 6.9-second 0-60 times and 16.10 seconds through the quarter-mile, leading them to conclude, “For our money, it’s the best-balanced, most capable Mustang ever done.”

The ’82 5.0-liter HO got things started. By ’85, the 5.0 had a four-barrel carburetor, even better cylinder heads, and tubular headers, followed by electronic fuel injection (EFI) for ’86. With their four headlights, enthusiasts refer to the early Fox-bodies as “four-eyes.”

Ford commemorated the Mustang’s 20th birthday with a special 20th Anniversary Edition, available as a white hatchback or convertible with red “GT 350” rocker panel stripes. It was a nice nod to the Mustang’s history, although it led to a courtroom dispute between Carroll Shelby and Ford over the use of the GT 350 nomenclature.

Mustang performance enthusiasts panicked when they learned about the 5.0-liter’s EFI for ’86, fretting that any modifications would upset the new-fangled EEC-IV computer. Turns out, nothing was further from the truth. By the time the revised 225-horsepower 5.0-liter arrived in the Mustang for ’87, owners had learned that the EFI engine responded extremely well to typical hot-rodder tricks, fueling a 5.0-liter revolution on the street and track.

We remember our friend Austin Craig from Ford’s J. Walter Thompson advertising agency calling with the exciting news about the ’87 Mustang GT: “Wait until you see it,” he predicted. “It’s got an aerodynamic nose, body effects with rear scoops, and fluted taillights.” The ’87 GT established a new benchmark for a factory-produced Mustang with its combination of performance and style.

As Ford reentered the racing arena after a decade-long absence, the company looked to its successful European organization for direction. The result was Special Vehicle Operations, which was charged with supporting private racers and developing a performance parts program. To help fund the program, the engineers created the Mustang SVO, one of the best-balanced Mustangs ever built. Produced from ’84 to ’86, the SVO featured a high-tech turbocharged and intercooled four-cylinder engine, special suspension with new “quadra-shocks” at the rear, and a unique appearance, including an off-set hood scoop and dual-plane rear spoiler. Car & Driver called it “the best all-around car for the enthusiast driver ever produced by the U.S. industry.”

Drag racer “Stormin’” Norman Gray was among the thousands of enthusiasts who flocked to the lightweight, inexpensive 5.0-liter Mustang as their quarter-mile weapon of choice. With nitrous oxide, Gray’s black ’87 GT convertible ran consistent 11-second times as he drove the car to the track, bolted on a set of slicks, and then drove home. Later, Gray sent his GT to Roush Racing, where it was transformed into one of the top Pro 5.0 drag Mustangs.

Return of the Convertible

After ’73, the Mustang soldiered on without a convertible model in the lineup. But that changed in ’83 when the ragtop was once again offered, although they started life as factory-produced hardtops before their conversion into convertibles at Cars & Concepts.

As soon as enthusiasts realized that the 5.0 LX hardtop was some 400 pounds lighter than the hatchback, they grabbed them for street performance and drag racing duty. Hardtops are still coveted today for the same reason. Plus, they look cool!

We Have a Roadster

When the Mercury Capri was discontinued after ’86, ASC/McLaren moved its roadster body style to the ’87 Mustang GT. It was one of the coolest Mustangs ever with its two-seater configuration and unique tonneau cover for the classy cloth top. Former ASC/McLaren employee Henry Huisman purchased the company’s parts inventory, including much of the tooling, when ASC disbanded its Mustang program after 1990. Today, Huisman is known as “Mr. McLaren” as he continues to supply parts for McLaren Mustang maintenance and restoration.

As the Fox-body era came to a close in the early 1990s, Ford sought out ways to generate interest as potential buyers began hearing rumors about a restyled Mustang for ’94. At mid-year ’92, the first “Feature Car” LX convertible arrived with a 5.0-liter engine and monochromatic Red paint, followed by equaling stunning ’93 models in Chrome Yellow and Vibrant White.

Going Out with a Bang

Ford’s newly organized Special Vehicle Team (SVT) gave us the best factory-produced Fox-body at the end of Fox-body production and provided a glimpse of the Mustang’s performance future with the ’93 Cobra. Sporting a unique grille and “turbine” aluminum wheels, the SVT team added 30 more horsepower to the ’93 5.0-liter thanks to GT-40 cylinder heads, a special intake manifold, and a hotter camshaft. A limited-edition Cobra R deleted the rear seat, A/C, and radio and added larger five-lug four-wheel disc brakes to provide a turnkey version for racers.

When Fox-body production ended after ’93, the ’79-’93 Mustangs became typical used cars and often fodder for race and street machines. However, as the first Foxes reached their 20th birthday, enthusiasts and collectors began coveting some of the more unique and special models. At National Parts Depot, Jim and Rick Schmidt managed to corral “bookends” of the Fox era by acquiring the first ’79 Mustang and the last ’93, a red GT convertible.

Over 20 years after the last Fox-bodies rolled off the Ford assembly line, the ’79-’93 Mustangs are enjoying a resurgence in popularity, although, unlike the ’65-’73 Mustangs, owners are less likely to restore to original and instead build these lightweight machines into modern-day performance cars. At Muscle Mustang & Fast Fords magazine, Marc Christ showed what can be done with a Fox-body by resurrecting a ’88 GT hatchback into “Project Hypersilver,” a tastefully-done Fox with a Jon Kaase 427 and vintage stack-style injection.

Power in the Hands of a Few

When Ford nearly overlooked the Mustang’s 25th anniversary, Steve Saleen commemorated the occasion with a special SSC—for Saleen Super Car—version of his Saleen Mustang. A racer himself, Saleen followed Carroll Shelby’s formula from the 1960s to acquire Mustangs from Ford, starting in 1984, and converting them into high-performance Saleen models at his facility in southern California. He’s still building Saleen Mustangs today.

The 5.0-liter Mustang gained another notch on its performance handle when it was chosen by many law enforcement agencies as their high-speed pursuit vehicle. Equipped with a Special Service Package (SSP), these smaller hardtops replaced the big sedans used by many states, including California, Florida, Georgia, and Michigan (pictured). When their service ended, the SSP 5.0 Mustangs were sold at auction, providing enthusiasts with a chance to cheaply purchase a performance Mustang with law enforcement history.