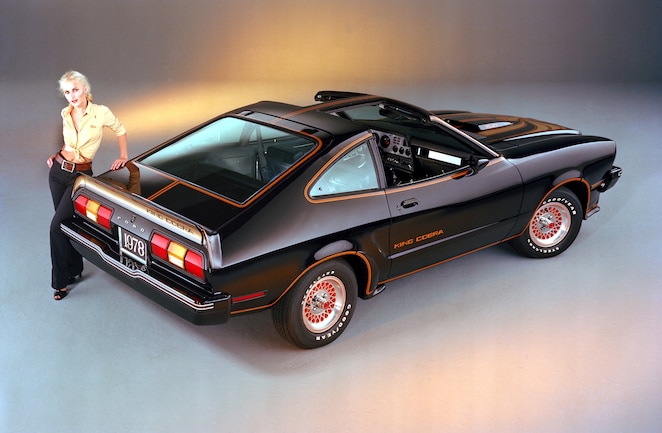 Of all the Mustangs produced over the past 50 years, the Mustang II gets more than its fair share of criticism. Yes, the ’74 model was the only Mustang without a V-8, and of course it arrived at one of the worst times in American automotive history as U.S. automakers scrambled to deal with increasing fuel prices, tougher emissions regulations, and competition from the Japanese. Some will say that the Mustang II is little more than a Pinto makeover. Sure, the ’74-’78 Mustang was initially based on the Pinto chassis. But by the time the engineers met Lee Iacocca’s goal for a luxury compact, the only part left from the Pinto was the rear floorpan.

There were a number of highlights during the Mustang II era, like rack-and-pinion steering (still used in the street rod industry today), Ghia luxury, and King Cobra musclecar graphics. Best of all, the Mustang II bridged the difficult gap between the first generation and the Fox-body, keeping the Mustang legend alive and ensuring its standing as the longest continuously running American automotive nameplate.

Just like 1964, Lee Iacocca had the right idea for the right Mustang at the right time. After watching his beloved Mustang grow from a sporty compact to an almost intermediate sized car during ’71-’73, Iacocca spearheaded a movement within Ford to develop a smaller Mustang for the 1970s, an era of increasing fuel prices and insurance regulations. It was the right move for the Mustang.

Unlike earlier Mustang fastbacks that offered very little storage space in their confined trunks, the Mustang II’s first use of a hatchback bodystyle—Ford called it a “2+2”—provided abundant room for golf clubs and luggage, as this Ford publicity photo demonstrates.

Initially, the Mustang II was planned as a hatchback only. But Iacocca envisioned his “Little Jewel” as more of a luxury compact, so the styling department, led by Howard “Buck” Mook, initiated a program to add a classy-looking hardtop body style as well. Designer Dick Nesbitt got the assignment to create the formal-looking roofline.

When the Mustang II first arrived in Ford showrooms in late summer of 1973, it wasn’t well received with its base 85-horsepower 2,800cc four-cylinder, along with the fact that dealers stocked their showrooms with heavily optioned (i.e.: expensive) models. However, when the Organization of Petroleum Exporting Countries (OPEC) proclaimed an oil embargo just two months later, fuel prices in the U.S. jumped to new highs. In many areas, gasoline was scarce, resulting in long lines at the pumps. All of a sudden, Americans started trading their big automobiles and musclecars for smaller vehicles like the Mustang II, a car that, unlike the Pinto and Maverick, offered a combination of luxury and economy. By the end of the ’74 model year, Ford had sold nearly 386,000 Mustang IIs, making it the fourth best-selling Mustang of all time.

Mach One Up for Mustang

Although not available any longer with 428 Cobra Jet or 351 Cleveland power, the Mustang II Mach 1 model continued to provide a muscular appearance with black-out rocker panels and raised-white-letter tires on mag wheels.

Car of the Year

While most car magazines of the day criticized the ’74 Mustang II for its lack of power, Motor Trend crowned the new Mustang with its coveted Car of the Year award, the first for a Mustang.

Seeing the error of its ways, Ford made the needed modifications to the front of the ’75 Mustang II in order to fit the 302 V-8 as an option. Even though the two-barrel small-block was rated at just 129 horsepower, the V-8 was welcomed by buyers.

The lack of underhood performance in the Mustang II did not deter Detroit street racer Joe Ruggirello, who bought a silver ’75 hatchback and delivered it to well-known Ford race builder Gapp and Roush for a street machine makeover. With a 505 cubic-inch big-block built by Jack Roush and huge rear tires, Ruggirello’s “Sudden Death” Mustang II was capable of 9-second quarter-mile times through the mufflers. Hot Rod magazine made it one of the most recognizable Mustangs of all-time when it featured the car in a 1977 issue. Sudden Death is currently owned by Florida’s Tom Tate, who recently completed a total restoration.

The best of the Mustang II wouldn’t be complete without the Cobra II, which debuted in ’76 as a Motortown Corporation aftermarket upgrade before joining other Mustang II models on the Ford assembly line for ’77-’78. The package added Shelby-like striping, a non-functional hood scoop, front and rear spoilers, and louvered side window panels. Colors reminiscent of the Shelby days, like white and blue, were also part of the equation, but the Cobra II looked especially vintage in black with gold to replicate the ’66 Hertz Shelby.

The Mustang II was never offered in a convertible body style, so removable T-Tops were a welcomed option when they became available for the ’77 hatchback.

Southern California’s Galpin Ford specialized in performance during the 1960s, so they continued their “Galpinizing” with the Mustang II, as seen here with this wildly customized model offered through the dealership during the mid 1970s.

King of the Cobras

The Mustang II era ended with a bang thanks to the ’78 King Cobra, Ford’s answer to the Pontiac Trans-Am with its “screaming chicken” hood graphics. Likewise, the King Cobra came with a huge snake decal sprawled across the hood, along with a rear-facing scoop, large front air dam, rear wheelwell spats, and black-out grille. It was “sticker muscle” at its best. Yet, with the 302 in combination with a four-speed manual, the King Cobra was the most fun ever offered in the Mustang II.

One of the Mustang II’s enduring legacies is its coil spring/lower A-arm front suspension and rack-and-pinion steering, both relatively new innovations for the 1970s and a big improvement over the first generation Mustang. Today, the Mustang II front suspension is still popular for street rod and restomod builds, with a number of aftermarket companies offering their own versions for weld-in modification.

Unfortunately, the Mustang II followed the popular Mustangs from the ’65-’73 era, so the ’74-’78 models never captured the hearts and imaginations of enthusiasts like the originals. However, the Mustang II sold well over one million units during its five-year lifespan. More importantly, the Mustang II continued the Mustang legacy, keeping Ford’s ponycar alive until a new breed of Fox-body could return the Mustang to the top of the performance world.