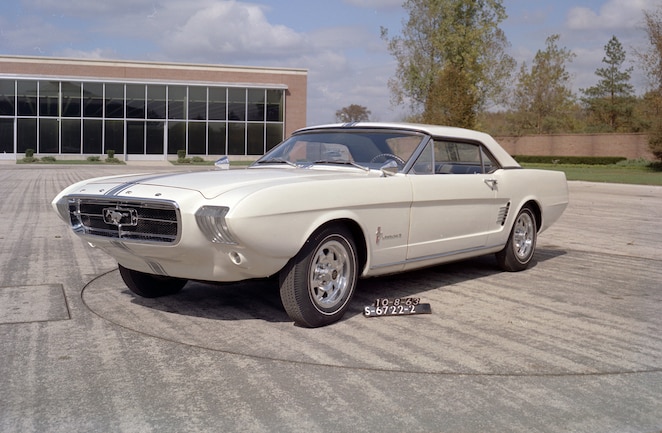 For many years, Mustang enthusiasts have searched for the two dozen Mustangs that were used on the Ford Pavilion’s Magic Skyway during the 1964 and 1965 New York World’s Fair seasons. Dr. John Mansell didn’t have to look far – 5F08F100004, the fourth serialized Mustang that served as a Magic Skyway convertible in 1964, was stashed in his Pennsylvania barn.

Thanks to John Mansell, one of the original 1964 Magic Skyway ’65 Mustang convertibles exists today in amazingly original “survivor” condition.
Mansell with his Mustang in June 1965 after picking it up from the Ford sales lot in Dearborn.

Even as early as 1965, Mansell was collecting early production cars. When a friend at Ford alerted him about an early Mustang for sale at Ford’s employee resale lot in Dearborn, Mansell convinced his father-in-law to purchase the car until he could raise funds to pay him back. In June 1965, Mansell and his father-in-law traveled to Dearborn to pick up the 6,100-mile car – not including the Magic Skyway miles, of course.

Mansell used the convertible as a family car until 1978, then “retired” it by placing it in his barn with his other early production vehicles. In 2009, son-in-law Rich Downing, who worked at Classic Design Concepts at the time, learned about the history of 100004 and convinced Dr. Mansell to pull it out of storage for display at the Ford Nationals in Carlisle, Pennsylvania.

Gail Wise still has the invoice, dated April 15, 1964, from Johnson Ford in Chicago. On that day, the 22 year-old Gail purchased her first car. “I was just looking for a convertible,” she says. “And the salesman said, ‘Come back here, I have something you might like.” In the garage area, under wraps, was a brand-new Skylight Blue Mustang convertible. The salesman, either unaware that the Mustang didn’t officially go on-sale for another two days or just anxious to earn his commission, sold the car to Gail on the spot. Suddenly, Gail had the only Mustang on the streets of Chicago.

Gail Wise purchased her ’64 ½ Mustang convertible on April 15, 1964, two days before the Mustang officially went on-sale at Ford dealerships. Her husband, John, convinced her to keep it, which gives Gail the honor today of having owned a Mustang longer than anyone else.
Gail’s Mustang in July 1964.

Gail credits her husband, Tom, with convincing her to keep the convertible for all these years, even as it sat, all rusty from northern winters, in the family garage. When Tom retired in 2006, he started a restoration that brought the car back to its 1964 condition. Since then, Ford has recognized Gail’s car as the “first public sale” of a Mustang and invited her, and her Mustang, to participate in reveal activities for the ’15 Mustang.

Andrew Hack was simply looking for a Mustang driver when he purchased a Grabber Yellow ’71 Mustang SportsRoof he spotted for sale on eBay. When he got it home, he noticed the early VIN – 1F02H100053. Further investigation revealed two data stickers on the driver’s door, one on top of the other. With careful application of hair dryer heat, Hack was able to peel up the top sticker to reveal the car’s original VIN with a “G” for the engine code. Yes, a ’71 Boss 302, a car that was supposedly never built when Ford pulled the plug on racing in the summer or 1970 and decided to offer only the Boss 351.

Andrew’s Hack’s ’71 Mustang purchase turned out to be more than just a used car when he found the original “G-code” data sticker underneath the replacement “H-code” sticker.
Hack’s Mustang may have been used for this Boss 351 promotional photo. Close inspection reveals that the “Boss 351” lettering has been retouched on the photo.

Kevin Marti’s production database and invoices uncovered the long, strange story. Hack’s Mustang was built on August 3, 1970, one of several Boss 302s ordered for the Ford dealer intro shows. However, 100053 was the only one completed; the other orders were canceled. The car was then shipped to the Las Vegas Convention Center for the dealer event. Apparently, the car then went into limbo as Ford tried to figure out what to do with a brand-new Mustang that should not exist. In early 1971, instructions were issued to remove the Boss trim and replace the VIN with one for a Mustang with a 351 two-barrel engine. The car was subsequently sold at Wilson Ford in Huntington Beach, California, as a 351-powered SportsRoof, albeit still with the Boss 4-speed and 9-inch rear end.

When Ford introduced the Boss 302 in the spring of 1969, it made perfect sense to utilize the new 290-horsepower Boss SportsRoof as the foundation for the Shelby GT 350. So an early ’69 Boss 302 was ordered, shipped to Ford’s performance contractor Kar Kraft, and updated with Shelby fiberglass and interior as a pilot car to test the feasibility. But before the Boss-powered GT 350 was completed and the program approved, Carroll Shelby ended the Shelby Mustang program, making this Acapulco Blue ’69 the only Mustang that was ever produced with a combination Boss (G-code engine) and Shelby (“4” as the first sequential unit number) VIN.

Fortunately, the car survived a number of subsequent owners, most of them unaware of the car’s unique status. In 2007, owner Billy Jay restored the Shelby Boss to the way it would have been completed at Kar Kraft.

This ’69 Mustang SportsRoof started life as a regular base-model Mach 1 – 351 engine, automatic transmission, no special options. However, when the car was delivered to Nebraska Ford dealership, it avoided an abused life as an everyday driver when dealership owner Bob Mercer added the Mach 1 to his stash of brand-new Fords, a collection that eventually included one new Ford from each model year between 1962 and 1970. When Mercer was diagnosed with cancer, he sold his collection of brand-new Fords, with the 52-mile Mach 1 eventually ending up with noted Mustang collector Bob Perkins. Because the Mach never sent through dealer prep, it still has the plastic coverings on the windshield wipers, steering wheel, and seat belts.

“It’s the one car in my collection that I’ll never sell,” Perkins says. “It’s my favorite!”

If cars could talk, few would have a more interesting history than the “Green Hornet,” an early-production ’68 Mustang hardtop that served as a prototype for both Ford and Shelby Automotive. The car was originally ordered by Ford for use as a prototype for a possible GT/SC (Sport Coupe) hardtop model with Shelby styling (which eventually became the California Special). Most prototypes ended up in the crusher, but Ford gave 8F01S104288 a second life by shipping it to Shelby Automotive, where it was used to try out experimental concepts. At Shelby, the 390 engine was replaced by a 428 Cobra Jet, the front end updated to Shelby fiberglass, and “EXP 500” added to the stripes. Later, the car was utilized as a test vehicle for Conelec fuel injection and independent rear suspension.

Somehow, someway, one of the first pre-production Mustangs, 5S08F100009, was pulled from the assembly line in early 1964 and sent to Dearborn Steel Tube, a contracted Ford shop, to be built into a shortened two-seater prototype by designer Vince Gardner. The car was eventually recruited for Ford’s Custom Car Caravan, where it was displayed around the country as the “Mustang III.” Fearing that Ford would crush his creation after its show duty ended, Gardner allegedly stole his unique Mustang and stashed it on the second floor of a rented Michigan warehouse, building a brick wall to hide it. However, the car was soon discovered and recovered by an insurance company, which eventually sold the car in 1969 to Bill Snyder, who had coveted the “Shorty” Mustang ever since reading about it in a 1965 automotive magazine.

The car is still owned by Snyder today. At the behest of Amelia Island Concours’ Bill Warner, Snyder restored the Mustang for Amelia’s “What Were They Thinking?” class at the 2013 show.

This one should have never survived the 1960s, much less sticking around for its amazing restoration by R&A Motorsports in 2012. Starting out as an early production ’67 Mustang, the convertible was shipped to Shelby American for use as a styling prototype for the upcoming ’68 Shelby convertible. There, it was designated as a “company car/engineering prototype,” served as a personal vehicle for Carroll Shelby, and was eventually painted in two different colors – red and white – for promotional and advertising photography. While most other Shelby prototypes were destroyed when Shelby American closed its southern California facility in 1967, the convertible was shipped back to Michigan, where it was refurbished and sold, probably through Ford’s resale lot. Amazingly, it survived the northern winters and everyday abuse, and was eventually rescued by collector Brian Styles in 2009. After extensive research provided the car’s full story, Styles shipped the Shelby to R&A for a restoration to its promotional photo condition.

Although the ’67 to ’68 Shelby styling convertible was used in many photos, it is perhaps best recognized from this promotional beach photo for the new ’68 Shelby convertible.

Thankfully, this special Mustang survives as the only ’67 Shelby convertible, the only big-block convertible built at the Shelby American facility in Los Angeles, and the third GT 500 built.

In this case, Ford recognized the significance of the Mustang II concept car, built in 1963 to tease the public about the coming of the ’65 Mustang in 1964. After its debut at Watkins Glen in the fall of 1963, the Mustang II toured the auto show circuit, then “retired” to a warehouse for storage until Ford donated it to the Detroit Historical Museum in 1975. The car is currently part of the museum’s transportation collection.

When photographed in 2012, the Mustang II was in storage at the Detroit Historical Museum (photo by Jim Kreuz)
The Mustang II in the Ford styling courtyard on October 8, 1963, just days before it debuted at Watkins Glen.