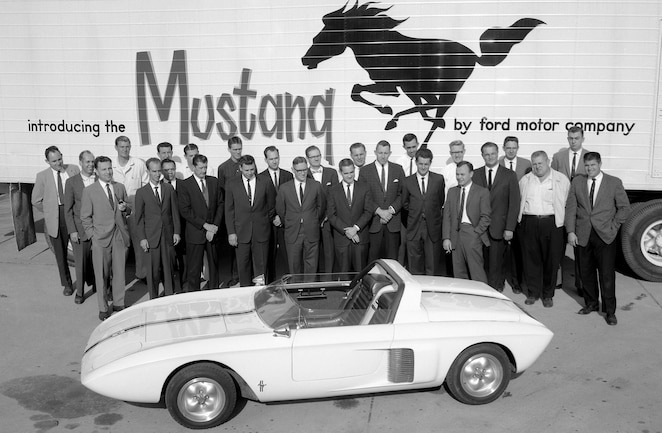 The Mustang name, as a Ford automobile, was introduced to the world in October 1962 as a two-seater concept during the U.S Grand Prix at Watkins Glen, New York. Unlike most concept cars of the time, the “Ford Mustang Experimental Sports Cars,” as it was officially named, was a running prototype, as driver Dan Gurney proved when he drove the white and blue on the Watkins Glen road course, reaching 100 miles-per-hour - to the chagrin of Chevrolet officials who displayed a static Corvair Monza concept.

Other than the name, there was little in common between the two-seat Mustang, which became known as the Mustang 1, and the four-seat ‘65 Mustang production car. However, with press reports from Watkins Glen, the Mustang name was etched into the mind of consumers.

Seen here are Ford photos from the Mustang 1’s introduction at Watkins Glen.