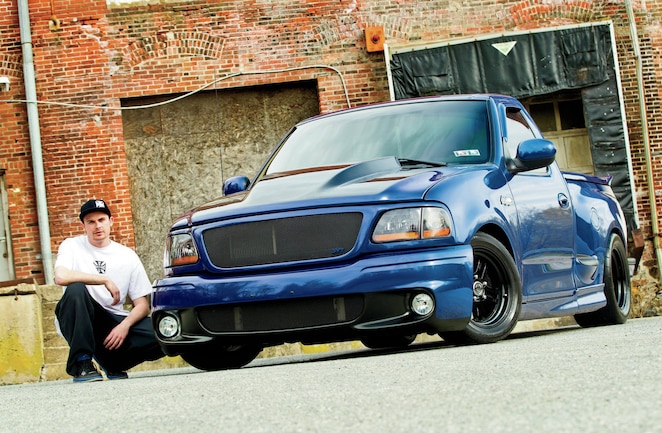 "I drive it like I stole it!" Pennsylvania resident, Michael Gondek boldly tells Team MM&FF on his tech sheet, and he really means it.

Whether it’s a hairpin-turn road course or a straight-line drag, this Sonic Blue ’03 Lightning is no trailer queen. He even lives on Race Street—literally! Well played, Michael, well played.

Michael was a freshman in high school when the Gen II SVT Lightning hit the streets in 1999-2000. The moment he laid his eyes on the factory-boosted truck, he aspired to own one. Fast-forward a few years to 2005. His dream came true when he bought the fierce Special Vehicle Team creation that we now covet—one part home project material hauler, one part 5.4L Eaton boosted modular.

After acquiring his ride, Michael immediately jumped on the popular forums to educate himself on the best modifications available. He started slow with the proven and inexpensive trend just about every Eaton-powered vehicle owner did: a nice blower port job. The subtle increase in power from the port-work was a little too tame. Taking baby steps, he slowly upgraded his boost to the point where the only power limitation was the stock engine itself. Supporting mods soon began, and he added the necessary fuel components: gas-guzzling dual Walbro 255-lph fuel pumps and 60-lb/hr injectors.

Doing most of the wrenching himself, with the help of his friend Eric Gray, Michael bolted oodles of other horsepower-sustaining goodies on his seductive blue beauty—like a Magnum Powers “Big O” monoblade throttle body with GT500 MAF and Dynatech headers, soon to be replaced by American Racing Headers long-tubes for better breathability in hopes of gaining about 20-30 hp.

Michael is affectionately known in the Lightning forum community and on Instagram as Blower Whore—maybe a little crass, but he gets this nickname honestly. This dude eats boost for breakfast! Get this: To date, he has had five superchargers on this truck, including a Magnum Powers setup and a Kenne Bell 2.3L Twin-Screw. Just three days after his dyno tune session at Woodbine Motorsports in Woodbine, Maryland, his bolt-on LT1 buddy called him out for a friendly quarter-mile jaunt. Michael took the challenge, but stumbled on some bad luck—he scattered the stock block sky-high as he blew past his opponent and took the victory in a blaze of glory.

Michael set out to find a “budget built” forced induction–ready engine to replace the stocker and came across a killer deal from MMR. After two transmissions, it was time to get serious with a bulletproof 4R100 and Circle D converter setup from A-1 Transmissions in Flowery Branch, Georgia. He beefed up the rear end with 3.73 gears and an Eaton True Trac rearend, which is met with an aluminum driveshaft. Shortly after the transmission swap, he ditched his 2.3L KB and opted for an uncommon-looking Mystichrome Whipple making a fierce 18 psi.

Again, Michael headed to Woodbine Motorsports for a custom tune session. His Lightning dominated the rollers and laid down nearly 600 rwhp and 670 lb/ft of torque. He has already increased the boost with an 8-pound lower and 3-inch upper pulley setup since that session, and the new numbers remain to be seen from this increase in boost. With the combination of a built engine, proper fueling, boost (our favorite), and a built transmission and rearend, there is virtually nothing stopping this truck from eclipsing 10-second e.t.’s. The fact that Michael isn’t afraid to get a little seat-time in a road course environment makes the cool factor of this blazing bolt that much greater.

The brilliant pop of the Sonic Blue exterior is tempered by a carbon fiber hood and black 17-inch Center Line wheels (for the moment, anyway). The suspension gives this Lightning perfect posture with V6 F150 springs, QA1 shocks, DJM upper and lower control arms, and fiberglass leaf springs. All this Lightning talk has us hankering for a generation III version (Ford, are you listening?).

The final destination for this bolt of badness is unknown, but you can bet that after two engines, five superchargers, three transmissions (four if you count his plans for a T-56 swap), and four sets of wheels, it’ll be an ever-changing labor of love for Michael and his Lightning.