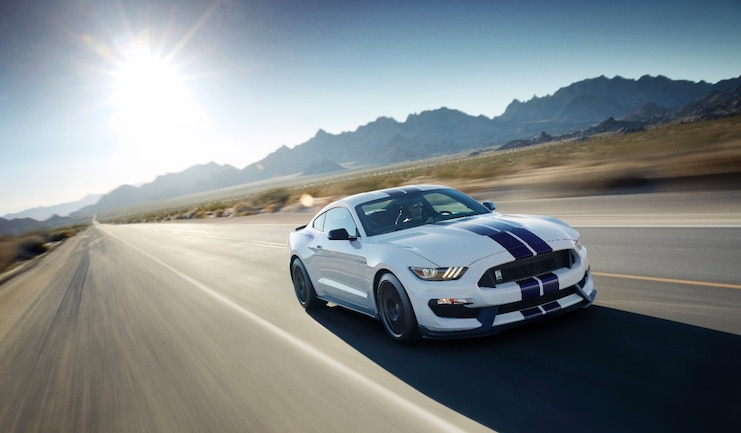 Ford has been teasing us with the GT350 version of its new S550 Mustang platform since the car was first spied testing on the Nurburgring in July 2014.

Finally we have confirmation of many of the GT350 rumors, yes it has a 5.2L V8 with a flat-plane crank, yes, it’s naturally aspirated, yes, it was built with track day triumphs in mind. We got our first glimpse of the white and blue racer at the Carroll Shelby Foundation in Gardena, California. There was smoke, and lights, and a very peculiar grumbling sound from behind a curtain as the new pony car came fishtailing in to the garage. It came to a stop in front of a presentation screen, and Jim Farley, Executive VP of Ford stepped out to give a brief talk about Shelby and Mustang history.

All the expected things about a new performance car were said, “Motorsports legacy since Day 1,” “Racing connects to customers,” “Something impressive about NASCAR wins.”

Finally, we got to the good stuff, details on the 2016 GT350. It still features the Shelby name, but in a much quieter capacity than the previous generation. We only saw Carroll’s brand on one spot, somewhat subtly embossed on the carbon fiber front splitter. Ford has made no secret of the fact that its going for a world-wide audience, and the more understated design of the 2015 Mustang carries over into the 2016 GT350.

That’s not to say the car doesn’t look aggressive, or that it isn’t a distinctive design, unique from the base cars. In fact, the GT350 has an entirely different shape and function from the A-pillar forward, with a front track width increased by 35mm and dedicated springs, bushings, and bodywork. Speaking of bodywork, the aluminum hood and fenders are lower and wider than the base Mustang, a change which we think greatly improves the look of the car, and also suggests that the GT350 is meant for North American audiences, rather than the European continent—which has much stricter rules about front crumple zones for pedestrian safety, the reason for the 2015 Mustang’s somewhat puffy front end.

In the rear, the GT350 has a functional diffuser—which directs air both out from under the car, and over a dedicated rear differential cooler. Quad-tipped rear exhaust plays that exotic flat-plane sound to the outside world. Inside the driver and passenger get a slightly sound-system enhanced version of the exhaust note from the 5.2L V8.

That overhead cam V8 is a wet-sump, port fuel-injected aluminum block engine based on the 5.0L Coyote but sharing almost nothing in way of components. “Externally there’s little difference,” said Hermann Salenbauch, director of advanced product creation. “Inside you’d be replacing pretty much every part.” The block makes use of spray-in cylinder linings, a process that Hermann says saves nearly eight pounds in the engine and allows for better heat-transfer and oil control. Those of you wondering about rebuildability might have to wait for the technology to trickle down to your local machine shop, but it’s already widely in use in the heavy equipment industry as a way to repair expensive blocks that can’t be bored out or sleeved.

Horsepower is more than 500, specific numbers haven’t been given yet. Also vague is the exact redline that the “high-revving” flat- plane crank allows. Based on gauges and conversation, we’re going to guess it’s around 8,200 rpm. That should save you some shifts on the roadcourse, if you can get used to winging it up so high. Certainly Ford wants you to take the GT350 racing as often as possible. “The original GT350 wasn’t even intended to be a street car,” Jim Farley said in his introduction. “It was built to win SCCA races.”

If you want to take on the SCCA in the 2016 GT350, Farley and Salenbauch assure us you won’t be disappointed. The chassis is stiffer, using carbon fiber both for aero control and to reduce body flex. An optional track pack can be added for additional cooling, although Salenbauch says that oil control and underhood temperatures will more than stand up to the average 20 minute track session. In fact, the cooling is so effective that a peek in the grille will show that the opening is actually partially blocked rather than straight through. No badge-blocking concerns here. “As air comes in it creates drag,” Salenbauch explained. “We wanted to minimize drag so all the ground effects, splitters and rear spoilers are designed for the most efficient downforce with the least amount of drag. Same with the cooling vents.”

If you want to bring the Mustang to a stop after all that high-RPM fun, Brembo six-piston calipers in the front with 15.55-inch rotors and four-piston rears with 14.96-inch rotors using SHW’s aluminum hat-to-iron rotor connection saves weight, cool efficiently, and will, according to Salenbauch, make believers out of anyone who gets behind the wheel. On the subject of wheels, the GT350 rides on lightweight aluminum alloy 19-inchers, 10.5-inches wide in the front and 11-inches in the rear, both clad in specially formulated Michelin Pilot Super Sports.

Inside, Recaro seats and the requisite flat-bottomed steering wheel proclaim the GT350’s racetrack readiness. A built-in track recorder will make it easy to compare your roadcourse performance.

What will this cost? We’re expecting to see the GT350 start around $65,000. That’s a lot less than the Porsche GT3 that Farley hinted was in the crosshairs for the GT350 during its design process. Think we should take one to Germany and see if we can hunt down a few Porsches? Scroll through our photos from the launch, as well as from the Shelby car show held outside the press conference. Do you think the new GT350 captures the spirit of the early cars?