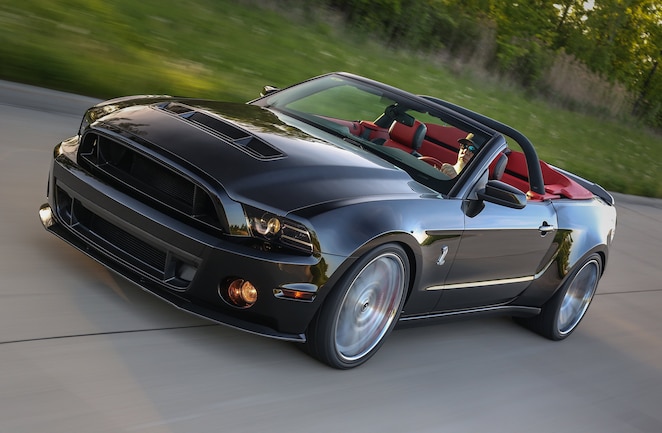 Wide-bodies are all the rage, and '13-'14 Mustangs seem to respond particularly well to the visual enhancement of such increases in girth. Lately, we've seen all shapes and sizes of Mustang beam-broadening, but for last November's SEMA show, Michigan's Ice Nine Group (www.iceninegroup.net) took the somewhat unusual approach of widening only the rear of a '14 G.T. 500 ragtop, leaving the front fenders at factory dimensions. The overall result is subtle, muscular, classy, and undeniably stylish, earning Ice Nine Ford's coveted Design Excellence Award at the 2013 SEMA show.

Clearly, the modifications didn't end with those flared haunches, as Ice Nine boss, Keith Strong explains. "I wanted to build what we felt would be the pinnacle G.T. 500. I have clients all over the United States and a lot of them drive high-end euro cars, like Bentleys, Porsches, and so on, and we wanted to build a Mustang to be the American supercar that could meet and even surpass the Euro supercars in every category—power, style, and interior. We wanted every touch point inside the car to feel as if you had spent your money well. The power is intoxicating, the materials and craftsmanship of the interior is of the highest level."

We should mention that the project's body mods are all designed in-house—and crafted in Detroit out of carbon fiber—and include not just the rear quarters but also the hood (and its heat extractors), the upper and lower grilles, and the decklid and its spoiler. Of these Ice Nine parts, all but the quarters remain in a natural carbon-fiber finish. All will be offered for sale, with those swollen quarters—which widen the rear by over 6 inches and allow 355-series Pirelli rubber—optionally being available in less expensive fiberglass.

Seen up close, the flawless black pearl BASF paint Ice Nine applied to the roadster is infused with a synthetic glass flake, having a warm tone to match the carbon fiber. Breaking up all this ebony-ness is a wicked set of Forgiato Maglia ECL rims, which are of 21-inch diameter; 10.5 inches wide up front, and a full 14 inches wide out back. Visible behind the slim spokes of the Forgiatos is a very serious and uncommon set of brakes. Made by Mov'It, in Germany, this is said to be the first set of 420mm (16.5-inch) carbon ceramic brakes for Mustang. And, no, we didn't ask the price. These stoppers are so large that the fully custom wheels had to be made using CAD data supplied by the brake manufacturer. Most of the G.T. 500's suspension remains factory issue, but a set of Ford Racing springs hunkers the body down over the gargantuan rolling stock.

Further contrasting with the project's dark and menacing exterior is a cabin pretty much guaranteed to grab your attention. Strong sought out the genuine supplier of Ferrari's leather for some red hides that make a striking contrast to the inky black body. But the leather was just the beginning, as he explains. "Everything has a high-density foam layer under the leather to give it a plush feel, not just gluing the leather to the plastic. We used 210 black thread in a French stitch and gave the seating and door inserts a diamond pillow pattern. We designed a rear seat delete and stitched our own red carpeting to match. The steering wheel is wrapped in the same red leather and has black Alcantara accents."

The upholstery was installed by Shawn Paul Custom Interiors. As for interior details, Strong even painted the shift ball with an "Ice9" logo. And it's literally topped off with the almost convertible-obligatory light bar from Classic Design Concepts, this time finished in Alcantara.

We now bring you to the engine bay. As if the G.T. 500's stock 662 hp weren't enough, the crew at Ice Nine unceremoniously yanked off its factory 2.3L supercharger and substituted Whipple's new 4.5L "Crusher" twin-screw monster, which is capable of up to 20 psi of boost (though such pressures might be a bit much for a stock bottom end). Making this boost more palatable to the 5.8L Trinity's combustion chambers is the proven cooling effect of a Straight-Shot water/methanol injection system, from Banks Power. You can see the system's digital controller tucked into the interior's left side air vent.

The big-as-a-breadbox supercharger (along with the cam covers) is sprayed in red to draw nearly as much attention as the interior, and requires the clearance provided by the car's new hood. On the outbound side, Kooks stainless long-tube headers pass the by-products on to a complete Corsa exhaust system, terminating in a quartet of black chrome tips. Though the car has yet to see a dyno, Strong guesstimates that well over a thousand horsepower are dealt with by the rear tires at full boogie, and we have no reason to doubt that claim. Even so, from our experiences riding shotgun in the ragtop during our photo shoot, this is among the most cultured and civilized four-figure horsepower rides we've ever encountered. Driveability and low-speed manners seem every bit as genteel as a stock G.T. 500, yet the power on tap is nothing shy of berserk.

Following SEMA, Ice Nine's wicked wide-body made a number of show appearances, including January's Barrett-Jackson televised Scottsdale auction, as well as the 50th celebration in Charlotte, all at Ford's request. Though Strong is now "having a blast taking it to shows and talking to all the people who are so passionate…" his plan is to soon sell this project to help finance the next one. So if anyone out there is in the market for a truly custom final-year G.T. 500 convertible with plenty of show and power credentials, feel free to look him up. 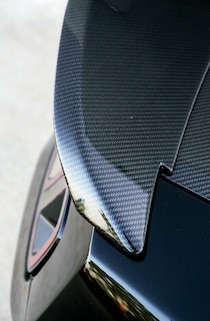